Hamilton Cruises To Victory As Norris Has Another Sensational Final Lap

After his sensational pole lap on Saturday, Hamilton retained the lead at the start of Red Bull Ring race number two and never looked back. He edged into a lead ahead of Max Verstappen and was never really under threat as the Mercedes had plenty in hand over the rest – and seemingly no repeat of the minor issues that affected the team in the first race.

Verstappen maintained second for much of the race but was unable to hold back Valtteri Bottas on fresher tyres – albeit not without a fight. Bottas cruised past on the run down to Turn 4 but Max was having none of it, and simply drove around the outside of the Mercedes. It didn’t last, and a lap later Bottas was through for good.

But while things up at the front were rather static, the battle behind really kicked off. Sergio Perez had brilliantly come from 17th on the grid to run fifth and challenge Alex Albon for fourth. With a few laps to go, he launched a move on the Red Bull at Turn 4 and for the second time in a week, Albon felt a car hit him on the inside. This time he didn’t spin however and it was Perez who came off worst, severely damaging his front wing and being forced to limp home the remaining laps.

Behind that, a three-way battle between Daniel Ricciardo, Lance Stroll, and Lando Norris was taking place. Stroll sent a huge lunge on Ricciardo at Turn 3 as they both ran wide, with Norris nipping past the Renault in the process. Then, on the last lap, Norris managed to not only get past Stroll, but catch Perez’s wounded Racing Point and steal fifth place on the final corner. Perez just held on for sixth ahead of Stroll on Ricciardo as they crossed the line three-abreast in an incredibly dramatic finish.

Behind them, Carlos Sainz was a distant ninth. He’d run strong early on but lost time with a slow pit stop and then ran out of tyres towards the end. He pitted for fresh rubber at the end and pinched the fastest lap, giving McLaren a 100 per cent record in that area at least.

Daniil Kvyat had a very quiet race but ended up a decent 10th to open his season’s account, while the Alfa Romeo and Haas had a race long scrap for the places outside of the points. Pierre Gasly ran well early on but struggled after seemingly making the wrong call to run the hard tyres in the middle stint, with the two Williamses bringing up the rear.

Retirements were down this time to just three non-finishers. Esteban Ocon suffered cooling issues in his Renault, but there was nothing mechanical about the other two DNFs. Up at Turn 3 on the opening lap, Charles Leclerc sent his Ferrari into a gap that wasn’t there and crashed into his teammate. Sebastian Vettel retired with no rear wing, while the damage on Leclerc’s car turned out to be too severe for him to continue. And you thought Ferrari’s season couldn’t get any worse…

It was important for Hamilton’s championship for him to have a clean and decisive victory and he did just that, though Bottas’s second means he still has the championship lead. The midfield fight looks to be where the real juice is this season, although if Racing Point can actually put together a clean weekend it looks more like they’ll be challenging Red Bull than fighting regularly with McLaren and Renault. 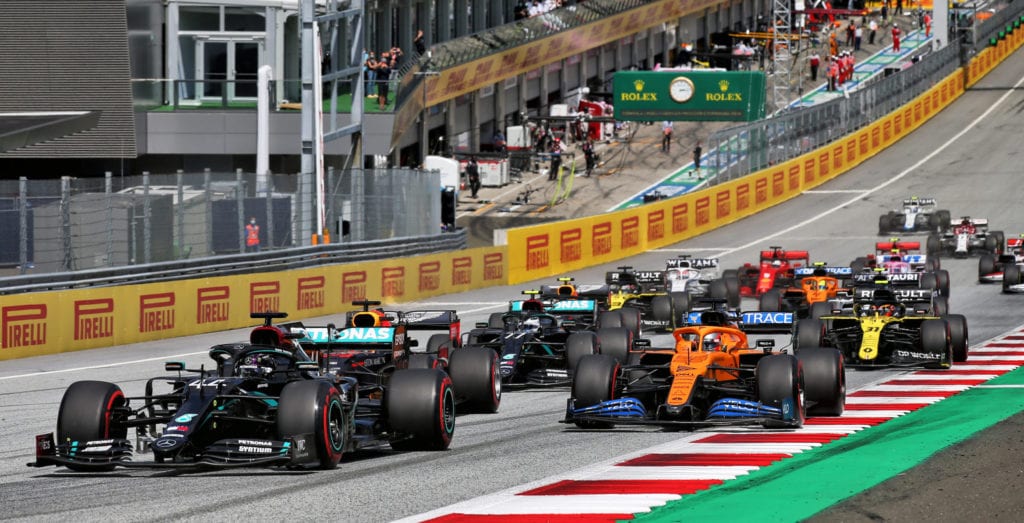