Hamilton Didn’t Bother To Visit The Stewards Because He Knew He Was Wrong – WTF1
Skip to content
×
Formula 1 , News

Usually when an incident is investigated after a race, everybody involved goes off to visit the stewards and explain their side of the story in order to make it easier for the stewards to come to the correct decision. I suspect that many drivers, even if they know deep down that they’re to blame, will go and argue the case anyway in the hope of not being hit with a penalty.

However, after he punted Albon out of a podium position on the penultimate lap, Hamilton accepted that he’d been the one who’d caused the incident and was deserving of a penalty. So instead of going off to explain himself to the stewards, he simply told his team that he’d made a mistake and they then reported that to the officials.

Hamilton didn't report to stewards because Mercedes team manager went earlier to them and reported that Lewis admited his error.

The stewards clearly agreed with Hamilton’s self-assessment and handed him a five-second penalty, dropping him to seventh and promoting Carlos Sainz to third. It’s a cool thing to do as it’s not often that you see such honesty from a driver. Mind you, with the championship wrapped up, he can kind of afford to be – had he been in a close fight for the title with, say, Max Verstappen, perhaps he’d have fought it a bit harder.

His acceptance of the penalty is hardly surprising, though – as well as being in the wrong, he also made a point to accept the blame in his post-race interviews, saying:

“I massively apologise to Albon, I went for a move, the gap was there but obviously it closed at the end. Completely my fault, I took a lot of risks today, as you saw.”

Albon was very philosophical about the whole situation and admitted that he simply couldn’t see whether Hamilton was alongside him or not:

“I need to look at it back to be honest. We came out of Turn 9, I had some gap to Lewis and I thought, ‘I’ll go into 10 just to cover him, make sure he doesn’t get any ideas’. Once you dive there’s a blind spot and you don’t know how far alongside you he is. It’s a shame as I think he would have taken me anyway into Turn 1, because he obviously had the fresh tyres, he was looking racy.”

It must hurt to now be the only driver in the Red Bull stable not to have a podium yet this season, but his time will come. Even if it’s not at the finale in Abu Dhabi, he should have plenty of opportunities in 2020. 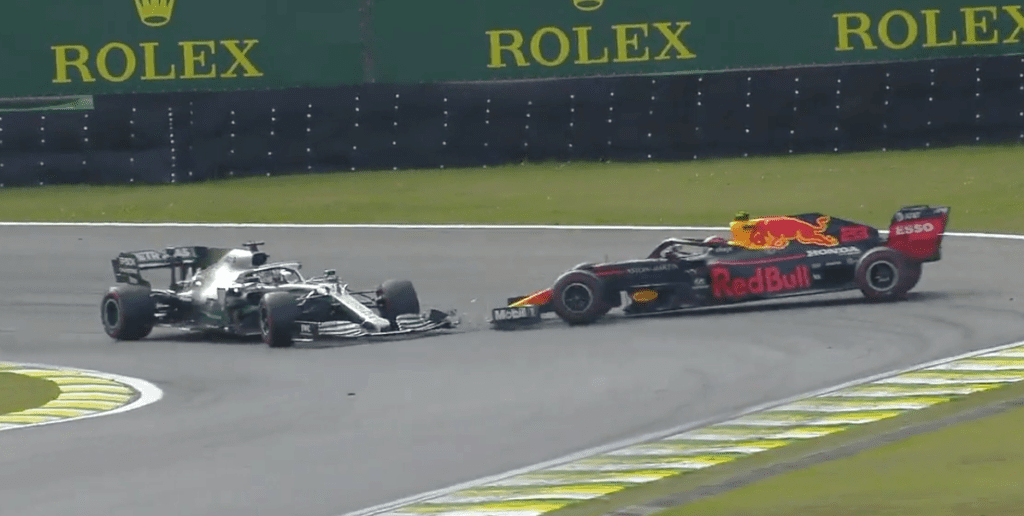