Hamilton Holds Off Vettel To Win His 200th F1 Race

The gap between Vettel and Hamilton has been trimmed to just seven points after a pretty decent, but not particularly dramatic, Belgian Grand Prix.

Hamilton had a good start and held off Vettel into the first corner, before enduring the pressure of the Prancing Horse on the long back straight.

Further back, there was a bit of chaos after Nico Hulkenberg, Sergio Perez and Esteban Ocon went side-by-side on the run to Eau Rouge, with the Force Indias clashing.

Vettel kept Hamilton in sight for most of the opening stint, but there was early disappointment for the thousands of Dutch fans who made the trip to Spa, after Max Verstappen retired with an issue.

In these opening stages, there were quite a few battles, but at the front, Hamilton remained in control. The gap ebbed and flowed, before Hamilton gained a bit more time in the pitstop phase.

It was at a similar location on the track, on the run to Eau Rouge, but this time it seemed obvious Perez knew Ocon was there. Perez had a puncture, Ocon lost his front wing.

With a lot of damage on track, the safety car was deployed and everyone dived into the pits, with Hamilton and Bottas going for softs, and the other frontrunners switching to ultra-softs.

This gave them more initial grip and Ricciardo put that to good use on the restart by passing Valtteri Bottas for third, having already got ahead of Kimi Raikkonen due to the Iceman’s stop/go penalty for failing to slow for double-waved yellows.

Vettel pushed hard to try and take the lead, but Hamilton had good pace on the softs. The gap increased and decreased with each lap and while it was tense, it didn’t come to anything.

So, Hamilton crossed the line after 44 laps with a 2.3 second lead over Vettel, with Ricciardo, Raikkonen and Bottas next up.

Nico Hulkenberg was sixth, after a great race and some exciting early battles, with Romain Grosjean, Felipe Massa, a recovering Ocon and Carlos Sainz Jr. completing the top 10.

Perez ended up retiring in the final stages due to the damage to his car, and Fernando Alonso had a great start to run as high as P7 before slipping down the order, sharing some angry radio messages and exiting the race with a problem.

See the final result of the race above. 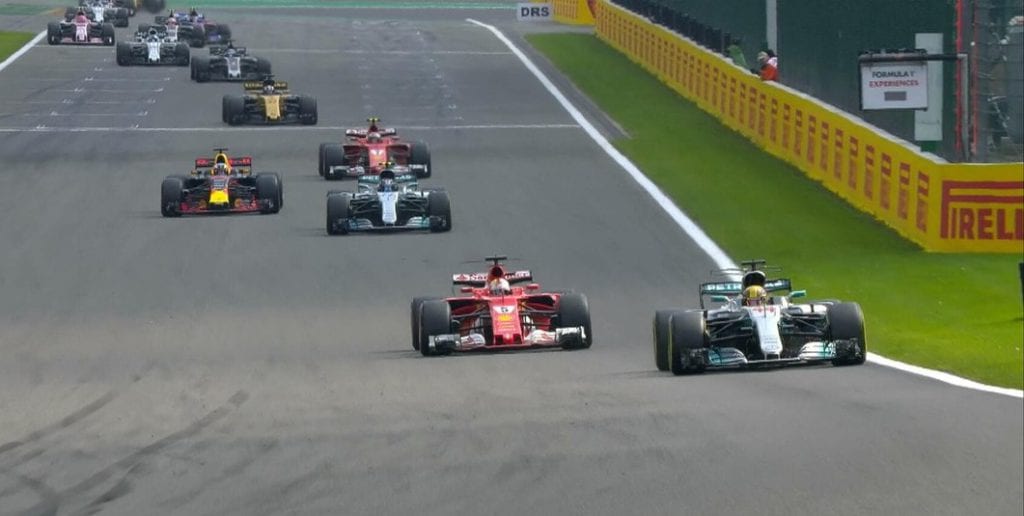