Hamilton On Pole By 1.2 Seconds In A Soaking Styrian GP Qualifying

With the Formula 3 race being red-flagged and FP3 being abandoned altogether, there was a worry that qualifying might not even be able to take place today. But, after a 45-minute delay, Q1 finally got underway and – despite the weather – the entire session actually ran surprisingly smoothly and with few incidents.

In the end, and as he so often does in these conditions, it was Hamilton who was peerless in the rain. With the conditions changing on a lap-by-lap basis, he seemed to have an answer for everyone. Max Verstappen was – also unsurprisingly – his closest challenger and potentially on course to get close to Hamilton’s time on his final lap, only to have a half-spin at the penultimate corner (possibly as a result of the pitting Sebastian Vettel ahead).

Regardless, Hamilton was able to go even quicker on his final lap and take a commanding pole position, a massive 1.2 seconds ahead of second-placed Verstappen.

With conditions in Q3 the worst of the whole session, a number of midfield drivers were able to impress. Lando Norris initially looked quick, but it was the French duo of Esteban Ocon and Pierre Gasly who showed serious pace, consistently pumping in top-five times. Gasly ended up eighth but Ocon finished a fine fifth, just behind Valtteri Bottas.

Once again, McLaren was impressive in qualifying as Carlos Sainz pinched third in the closing stages. Norris ended up sixth, which will become ninth thanks to a three-place grid penalty for overtaking under yellow flags during FP1.

Ferrari once again had a tough qualifying with only one car making it into Q3 again. This time it was Sebastian Vettel’s turn as Charles Leclerc struggled to find time at the end of the Q2 and just missed out in 11th.

The absolute star of Q2, however, was George Russell. Not only did he put a Williams in Q2 for the first time since the 2018 Brazilian GP, but he was less than a tenth away from making it through into Q3.

One team that really struggled was Racing Point. Although the car looked a real threat in the dry, in the wet neither driver could really capitalise – Lance Stroll only ended up 13th, while Sergio Perez didn’t even make it out of Q1.

Antonio Giovinazzi brought Q1 to an early end when he crashed at the final corner and shed debris over the circuit, while Romain Grosjean didn’t even get to set a time after an apparent issue right at the start of the session.

It sets up an intriguing race for tomorrow. Hamilton has put himself in a great position to undo his awful first race of the year – as long as he stays off the kerbs, anyway – while Max Verstappen will have another bite at the cherry after the reliability issues from last week. With a few cars and drivers out of positions, notably the Racing Points, expect plenty of action throughout the field. 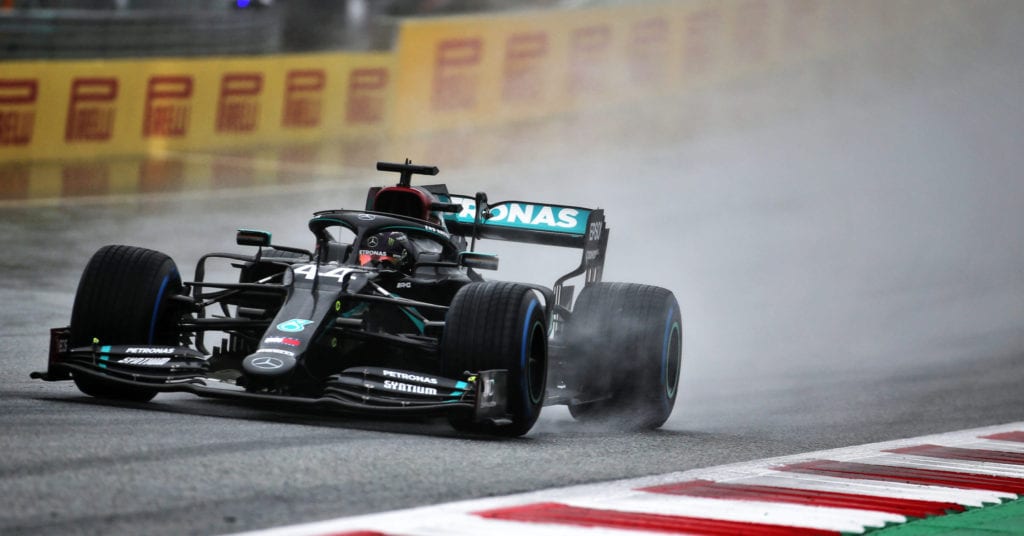