Lewis Hamilton loves bikes. He has a partnership with MV Agusta which has seen the company release a special ‘LH44’ edition bike, and in the winter he even had a cheeky superbike test at Jerez, where he was apparently pretty handy.

Though the chances of Hamilton switching to race in MotoGP are about as likely as him asking Nico Rosberg to dog-sit for him during a race weekend, the five-time champ is keen to see what it’s like to ride a full-fat MotoGP bike. He was at the season-opener in Qatar this weekend and told the MotoGP website:

“100 per cent I’m going to ride one, I’m building up to it. I need more days firstly because I’ve only had two-and-a-half days on the track, but eventually I’d love to try a MotoGP bike. That’s the dream. I watch it every weekend it’s on. Even when I’m on a grand prix weekend, I’m jumping out of my meetings before and after qualifying so I can watch the qualifying here.

“I’m just so busy that’ve I’ve not been able to come to many of the races. I have a permanent pass now, which I’m really, really grateful for, so now I can nag Petronas to give me a ride on their bikes anytime I want!”

He wouldn’t be the first F1 driver in recent times to try out the two-wheeled equivalent of F1 machinery – Fernando Alonso has had a couple of goes on a Honda at events in 2015 and 2016.

Hamilton also admitted motorbikes have been a life-long love for him, and that before he took up karting he was actually keen to try out two wheels first.

It seems like a plausible possibility – not only does Hamilton have a link to MotoGP through Petronas – which runs a satellite Yamaha team in MotoGP – but through Monster he also has a link to the full-fat Yamaha factory squad. Rumour has it that there could even be a ride swap between him and Valentino Rossi in the future… 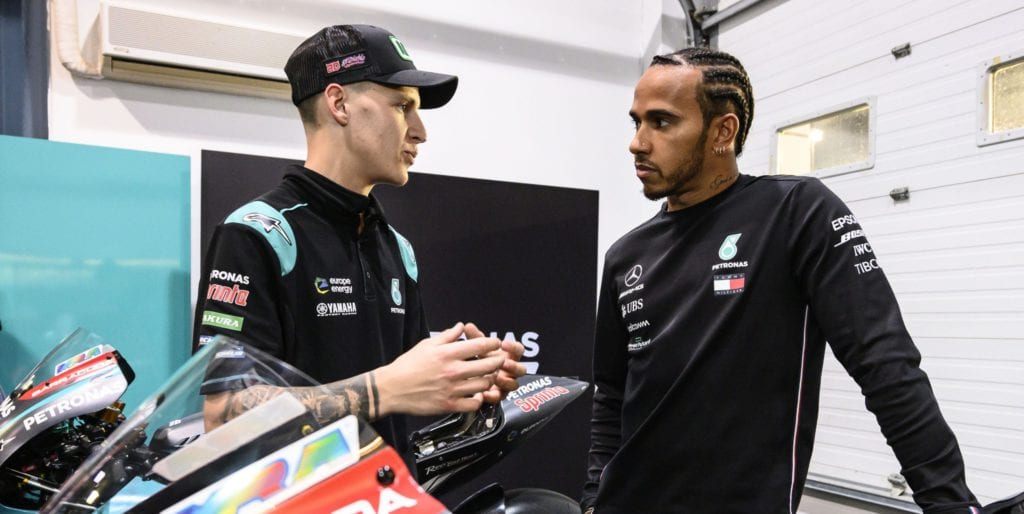