Lewis Hamilton has picked up yet another F1 record, becoming the first driver in history to reach 100 pole positions. Qualifying for the 2021 Spanish Grand Prix was filled with surprise, spins and some impressive performances from the midfield.

However, it was still a Mercedes on pole – did you expect anything else?

LANDO NORRIS SHOCKS US ALL WITH Q1 PACE

After a ten minute delay to repair a damaged barrier at Turn 9 as a result of a Formula Regional European Championship by Alpine race, qualifying for the 2021 Spanish Grand Prix finally got underway.

With five minutes until the end of the first session, it was a ‘traffic paradise’ as Yuki Tsunoda would call it. Cars seemed to be all over the place, with Sebastian Vettel taking another line on the circuit and cutting back on the track to enter the pits.

We all assumed it would be Hamilton, Bottas or Verstappen who finished the session quickest. However, it was McLaren’s Lando Norris who topped FP1. Uh-huh, we’re serious! The guy who currently sits P3 in the drivers’ standings ended the first qualifying session with a 1:17.821 – over 0.184 clear of second-place Bottas.

Charles Leclerc finished in third, with Verstappen and Pierre Gasly completing the top five. Hamilton, everyone’s favourite for pole, kept things cool and ended in ninth. George Russell managed to make it through to Q2 again, with the Alfa Romeo of Antonio Giovinazzi also setting a brilliant time to get him through.

Yuki Tsunoda was the shock elimination from Q1, with his teammate finishing the same qualifying session in fifth. It’s understood he went wide at Turn 9 and certainly dropped a few curse words on team radio.

BOTH ASTON MARTIN CARS OUT IN Q2

It was another really close result in the second qualifying session.

Despite looking strong at certain points over the weekend, both Aston Martin pilots Lance Stroll and Sebastian Vettel were eliminated from Q2. As expected, Russell and Giovinazzi were also knocked out and failed to get into the top ten. Gasly was also the final car that didn’t get into the last quali battle.

That's the end of the road for our qualifying. @lance_stroll ➡️ P11#SV5 ➡️ P13 pic.twitter.com/hshQh42cQX

Verstappen finished fastest, at one point going over half a second quicker than Bottas for that P1 spot. Eventually, Bottas improved, but it wasn’t enough to knock Max off the top spot, with Hamilton happily slotting in third.

Lewis Hamilton made history in Spain, bringing his total of pole positions to 100 in his F1 career. An astonishing achievement from Hamilton, and he becomes the first driver to reach this milestone.

“It’s down to the men and women back at the factory,” Hamilton said after qualifying. “It’s been a dream to work with these guys. Who would have thought at the end of 2012 we’d be at 100. I’m ecstatic! It’s like my first [pole position].”

Although it was expected a Mercedes would be on pole, Max Verstappen prevented a Mercedes front-row lockout by placing his Red Bull in second. Bottas starts in third, with Charles Leclerc delivering miracles in his Ferrari once again to start the Spanish Grand Prix on the second row of the grid.

Sergio Perez had a nightmare during Q3, spinning in his Red Bull and, as a result, not setting a qualifying time. He had another chance towards the end of the session but only managed a disappointing eighth. 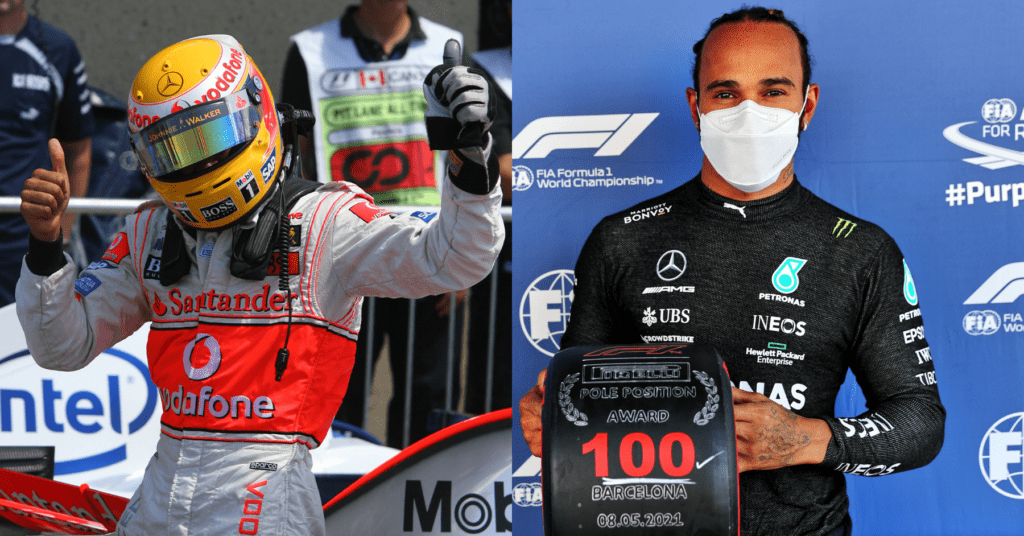