Before the start of the season, Formula 1 announced its ‘We Race As One’ initiative to help promote the fight against racism and inequality, as well as a pledge to improve diversity and opportunity within the sport. At the start of the Austrian GP, this manifested itself in the form of a moment of silence at the front of the grid as the drivers wore ‘End Racism’ t-shirts and, in many cases, took a knee.

Since then, however, things have appeared rather more… muddled. Before the Styrian GP, the cameras cut away from the drivers taking a knee in order to show some pre-recorded footage of some skydivers. Then in Hungary, the pre-race national anthem took place in the pit lane, but it appeared to be a disorganised mess as drivers didn’t know whether they were kneeling or not and some didn’t even make it from the grid in time.

The whole thing sends a bit of a mixed message, and after the race Hamilton criticised F1 – and GPDA chairman Romain Grosjean – for not maintaining the initial push. He told Sky Sports F1:

“Moving forwards, we need to speak to Formula 1 as they have got to do a better job. It was such a rush. I was getting out of the car, running over, quickly taking a knee. They need to do more.

“I don’t know why they only did it for the first race on the start. They have not done it since then. They have come out to say they are fighting for diversity and to end racism, but they are not giving us the platform to continue that. It is all rushed, so I think they need to give us more time. I will be speaking to them, probably send an email over the next couple of days and try to coordinate with them on that. Because they do want to, but I guess there was not good enough communication.

“[Grosjean] doesn’t think it is important to do it. He is one that thinks we did it once and that is all we need to do. So I tried to speak to him about what the problem is, and it isn’t going away, so we have to continue to fight for it. He didn’t mention anything in the drivers’ briefing and neither did Sebastian [Vettel]. Sebastian and I messaged each other and he stressed, as I did, the importance to continue to do it.”

Hamilton later stressed on Instagram that he doesn’t feel that taking a knee should be forced on those who don’t want to do it, but that it’s important for the sport to set aside time to support the message.

Today I raced for everyone out there who is pushing to make positive change and fight inequality, however, sadly, as a sport we need to do so much more. It is embarrassing that many teams have not made any public commitment to diversity or that we couldn’t properly find time to make a symbolic gesture in support of ending racism before the race. Today felt rushed and massively lacked organisation and effort, which in turn dilutes the message and makes it seem like there was something more important. It doesn’t matter if you stand or kneel, but we should be showing the world that F1 is united in its commitment to equality and inclusivity. F1 and the FIA need to do more. There is no quick fix for racial inequality, but it is certainly something that we can’t just acknowledge once and then move on. We have to stay focussed, keep highlighting the problem and hold those with the power accountable. #BlackLivesMatter #EndRacism 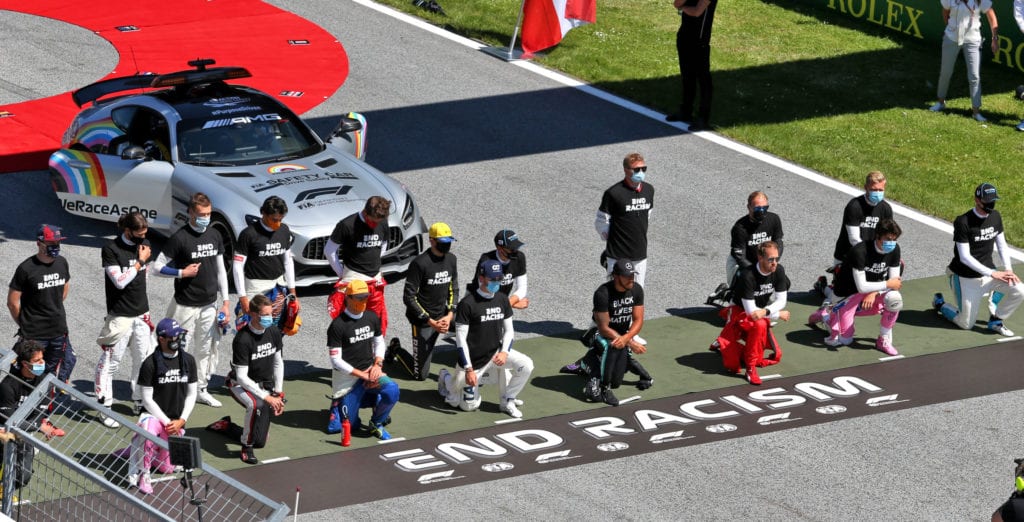