Hamilton Wins A Tense Strategy Race Which Could Have Been So Much Better – WTF1
Skip to content
×
Formula 1 , News

With around 25 laps to go, the Mexican GP was shaping up to be a real cracker. Hamilton was leading, but on old hard tyres. Sebastian Vettel and Bottas were second and third on fresher tyres following their only stop, while Charles Leclerc in fourth was pumping in rapid times on his two-stop strategy.

Any one of the four looked like they might have a chance of winning, but in the end the race just sort of… fizzled out. Hamilton had looked after his tyres well enough to have the pace to prevent Vettel from getting in DRS range, while Bottas didn’t have enough speed to attack the Ferrari ahead of him. And Leclerc had lost time first with a slow pit stop and then with a costly mistake which stunted his progress and although just six seconds covered the top four at the end, it really wasn’t a finish worthy of remembering.

Things might have been different if Max Verstappen was in the mix. He made a good start but ended up in a tangle with Lewis Hamilton at the first corner which dropped him down the order. A few laps later he put an absolutely sensational move on Bottas into the stadium section, only for the front wing of the Mercedes the brush the rear tyre of the Red Bull. Verstappen’s tyre deflated on the pit straight and he had to limp back to the pits, well out of contention. He managed to recover to sixth, incredibly driving almost the entire distance on a single set of tyres, showing just what a threat he might have been.

His teammate did alright, though. Alex Albon ran a strong third in the early stages and, like Leclerc, went for a two-stopper. His middle stint wasn’t particularly good and he dropped out of the lead fight, but recovered strongly to finish fifth, 21 seconds behind the winner – perhaps his best Red Bull race so far.

Sergio Perez delighted his home fans by finishing best of the rest as he held off a feisty Daniel Ricciardo. Nico Hulkenberg was set to finish ninth but was torpedoed by Daniil Kvyat at the finish line. Rear wing missing he crossed the line to finish 11th, which became 10th following the inevitable penalty for the Russian, allowing Pierre Gasly to sneak up to ninth.

McLaren’s day started brilliantly and got exponentially worse. Carlos Sainz got ahead of Lewis Hamilton on the lap one but the race pace was absolutely nowhere and he slipped well down the order, eventually finishing 13th. That’s still better than poor Lando Norris, though – a wheel didn’t go on properly at his first stop and he lost more than a lap as his mechanics wheeled him back down the pit lane to fix the issue before the team decided to retire his car.

Despite the damp squib of a finish, it was still a super drive from Hamilton – and indeed, all of the top three. Hamilton’s tyre management in the second stint was excellent, as was Vettel’s in the first – the main difference between the two being that Mercedes’ strategy on the day was just a touch better. And Bottas looked at times like he was the fastest driver of the lot of them, but unable to make any inroads on the track.

Hamilton may have failed to secure the championship in Mexico for a third successive year, but he takes a 74-point lead into the final three races. The question isn’t whether he’ll secure it at COTA, but how he’ll decide to celebrate it. 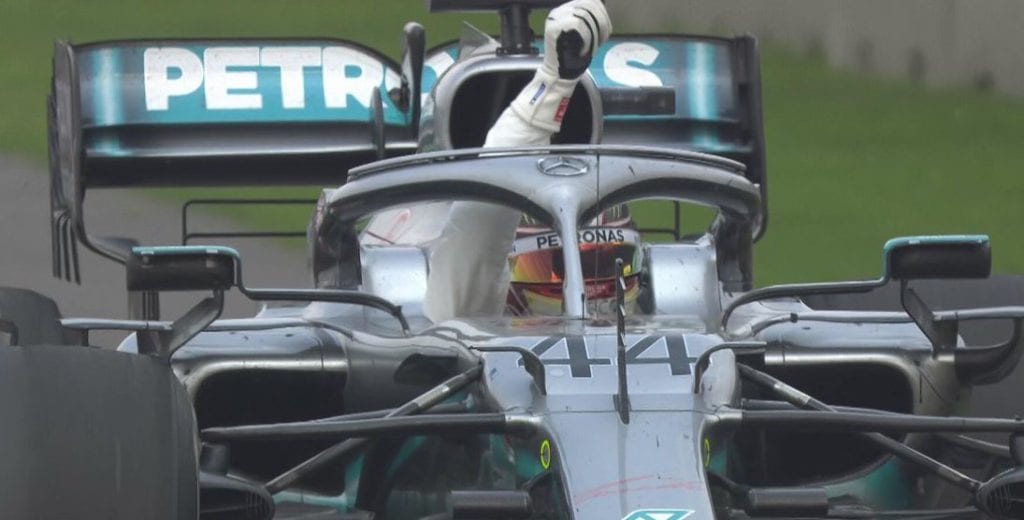