Hamilton Wins Against Verstappen In A Strategic Showdown in Spain – WTF1
Skip to content
×
Formula 1 , Report

Hamilton Wins Against Verstappen In A Strategic Showdown in Spain

Four races and four fights for the lead between the two championship rivals. That’s right, we had even more of it in Barcelona with a hardcore strategic tussle between Mercedes and Red Bull.

We’ve been truly spoilt with this season so far. On track passes for the lead in every race? Seriously? If you’d told any of us this in the off-season we’d have jumped at it like there was no tomorrow. This was a race that proved, with this level of competition, even Barcelona can be fun!

At the first corner of the very first lap, we knew we were in for another battle royale this week because Max absolutely sent it. He was just behind Lewis in the braking zone but threw in a glorious dive that earned him the lead. He threw Lewis off the line so badly that he was a second behind halfway round the lap.

Further back, Charles Leclerc went straight round the outside of Valtteri Bottas at Turn 3, taking him out of contention for the win almost immediately because Max and Lewis were in a class of their own. They started to pull away from the Ferrari behind and made it a direct fight between the two of them.

Verstappen and Hamilton at the start 💪#SpanishGP 🇪🇸 #F1 pic.twitter.com/eIN5aAmZzn

The Safety Car came out early on because of Yuki Tsunoda’s AlphaTauri, which just turned itself off. Yuki couldn’t get it going again, and the field bunched back up together. But this did nothing to change the fight at the front because Max and Lewis were still able to pull away.

NOT JUST A ONE STOP?

The gap was staying steady between Lewis and Max at about a second. Hamilton was flirting with DRS, but he made it clear he was holding back because a third of the way through the race he just lit it up and was within half a second of Max.

It came out of nowhere, and it terrified Red Bull into a pitstop. Red Bull came in and pitted Max straight away, but the stop was slow. The call was so late that they didn’t have the left rear tyre ready, and it was more than double Red Bull’s usually perfect stops.

It looked like Lewis would be able to pit the next lap and have a brilliant undercut sealed on Max, and it would be controlled to the flag. But no, Lewis stayed out. He went on his own for five laps and then finally pitted. He came out with a five-second gap to Verstappen, but he was blistering. Lewis closed that easily.

Within six laps, he had closed the gap and was within DRS range. But that’s where it became difficult for him. The DRS zone is just that bit too short, and he couldn’t pass. He continued to stick in the DRS range, but a successful overtake would need a mistake from Max or purely something magical.

Bottas had jumped Charles Leclerc in a similar scenario, with Bottas pitting five laps before Leclerc, so the undercut was definite. Leclerc and Ferrari were conducting their own race in as short a time as possible to get the maximum points.

With the fight for the lead becoming a stalemate, Mercedes decided to do something different. The best way to retaliate with Red Bull’s track position was strategy, but it was clear Red Bull wouldn’t give up track position. So Mercedes bit the bullet and pitted Lewis from second.

Hamilton comes into the pits! 😮

He returns the the track 23 seconds behind Verstappen with 23 laps to go!#SpanishGP 🇪🇸 #F1 pic.twitter.com/McNwWIYCdf

They put on fresh tyres and sent him back out to close the gap and take the win. All eyes were on Max and Red Bull to see if they would try to match the strategy and keep the track position. Lewis’s first lap wasn’t exactly stellar either, but they stuck it out, keeping the lead.

Lewis had 23 seconds to close, and he had 23 laps to do it. One second per lap would make it a final lap move. So Lewis started to close, and his pace was destructive. He was 1.7s faster a lap than Max was. He was flying.

Only two things stood in Lewis’s way. Passing Max for the win would be the challenge, but no one predicted that passing Valtteri would be the main issue for Lewis.

Bottas was told multiple times not to hold Lewis up. It’s not quite let him pass, but it is effectively what it means. However, he wasn’t getting out of the way.

Lewis was within half a second of him, but he held him up for the majority of the lap. Hamilton was forced to go for the move into the new Turn 10, and Valtteri turned in to defend. This isn’t us hyping up an internal Mercedes rivalry. This was definitely one driver ignoring his team.

The prediction was a final lap pass but on Lap 60, with six to go, Lewis was already on Max and got past on the first attempt. He was ridiculously fast. He then waltzed off into the distance. Victory sealed.

With no hope of returning to the fight with Lewis, Max joined Valtteri, Sergio Perez, and Leclerc behind in fighting for the fastest lap. It was a saving grace for him, but in three out of four races, Mercedes have beaten Red Bull in a straight fight.

Bottas finished third with Leclerc, masterful in fourth. Sergio Perez spent most of the race behind Daniel Ricciardo, who looked to have got the best of his new McLaren machinery. Checo did get past eventually with a ballsy, late braking move into Turn 1 but fifth was all he could do. Ricciardo and Carlos Sainz were the last two drivers on the lead lap, with Lando Norris, Esteban Ocon and Pierre Gasly rounding out an incredibly frenetic top 10. 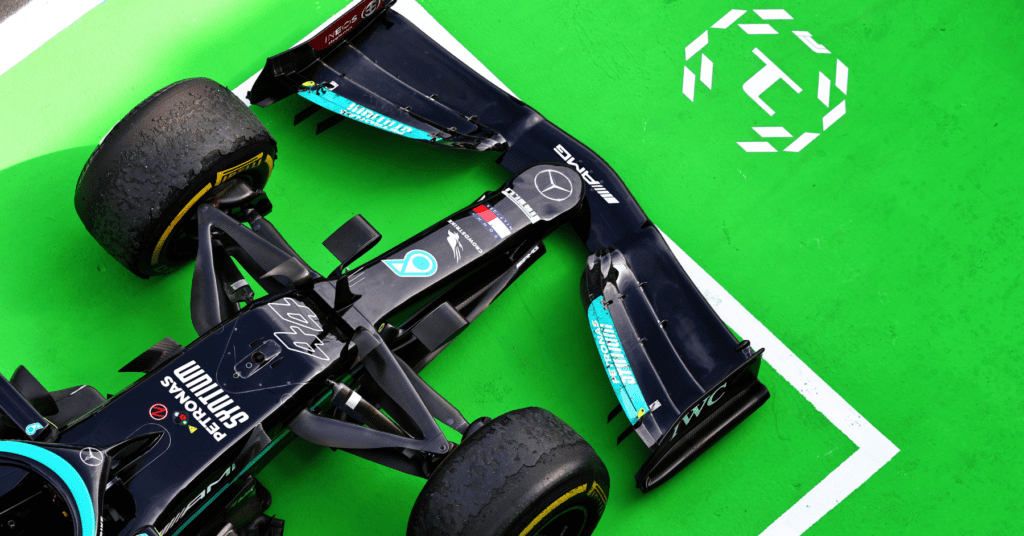