Where on earth do you start with that one?! The Azerbaijan GP started with a chaotic first lap, had a tense, strategy-led middle phase and then ended with absolute carnage.

Sebastian Vettel was looking good for the win until the safety car came out for the second time, which then gave Valtteri Bottas the advantage of a free pit stop as he’d yet to come in. Vettel made a move on Bottas at the restart but locked up and ran wide, dropping him to fourth. Then Bottas was denied victory when he hit some debris on the main straight and developed a puncture, allowing Hamilton to come through it all and take his first victory of the season. Of course, it was no thanks to a healthy dose of luck, although given how he lost the win with a headrest issue last year, he probably deserves it.

Of course, one of the big stories of the race is going to be what happened between the two Red Bull drivers. The two enjoyed several awesome scraps throughout the race which were (mostly) clean, but after their stops Daniel Ricciardo tried a move on Max Verstappen which resulted in the two of them crashing out and causing the final safety car period. Was Ricciardo too optimistic? Was Verstappen moving too much? That’s for someone else to decide!

Kimi Raikkonen took second after colliding with Esteban Ocon on the first lap, causing the first safety car of the race. He had to pit for new tyres and wing, but with so many other drivers (nine, to be exact!) also running into lap one drama, it didn’t cost him as much as it might have done.

Whilst Ocon was out on lap one, teammate Sergio Perez had a race which, apart from getting a penalty for passing before the safety car line early on, was fairly quiet. But in true Checo fashion he profited from the chaos around him to take his first podium for almost two years ahead of Vettel.

The Renault’s had looked quick early on as both Carlos Sainz and Nico Hulkenberg pounced on the slow Red Bulls at the restart. Whilst Sainz went on to finish fifth, Hulkenberg crashed out, probably because he realised there might have been a chance of a podium and, well, he’s allergic to them.

One of the drives of the race came from Charles Leclerc. After a great effort in qualifying, he looked like a contender for points all day and scored his first points in F1 with a brilliant sixth. Fernando Alonso continued his point-hoovering ways and finished seventh – impressive, considering he was hit on the first lap, and to drive back to the pits on two wheels and had a damaged car. Lance Stroll took Williams’ first points of the season in eighth Stoffel Vandoorne was ninth, and Brendon Hartley also gained his first points finish in 10th.

One of the most bizarre incidents of the race came during the second safety car period towards the end of the race. Having come from last to run in the points, Romain Grosjean was warming his tyres when he somehow managed to crash his Haas into the wall in one of the most embarrassing retirements in recent memory.

Hamilton’s win gives him the lead in the championship by four points from Vettel. Seb could feel a little unlucky not to have had a better result and although his lock up trying to pass Bottas was his own fault, you’ve gotta admire him for actually having a go.

Bottas has to win the award for the unluckiest driver, though, as he would surely be the Mercedes driver celebrating the win and championship lead had it not been for that bit of debris on the pit straight.

Baku, though, amirite?! Can we come back here a few more times before the season is over please, because it’s quickly becoming one of the best races of the season. 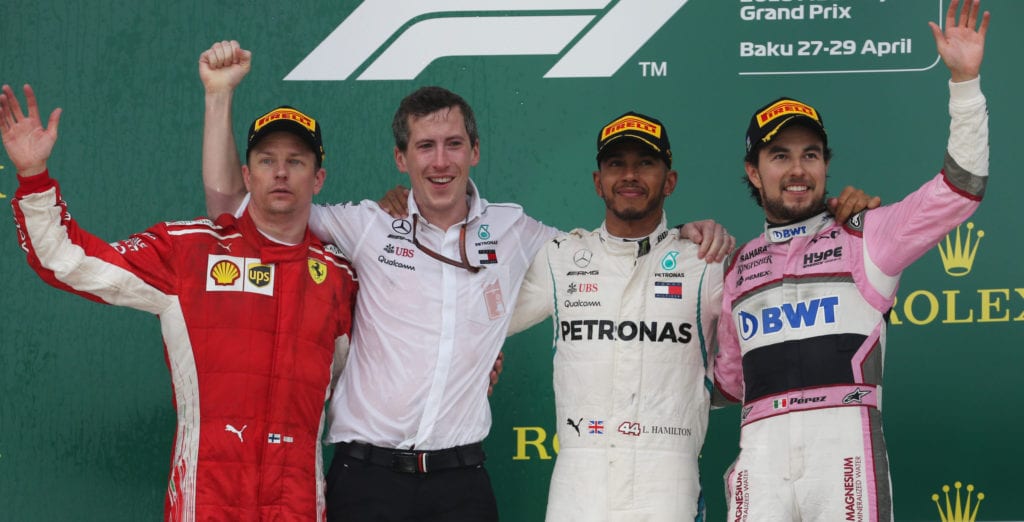