Wow, what an insane first race of the season. Lewis Hamilton managed to keep off a fierce Max Verstappen in one of the most incredible last-lap battles for the win that we’ve seen in recent years. With so much to discuss, let’s have a look at some of the big moments from the 2021 Bahrain Grand Prix. 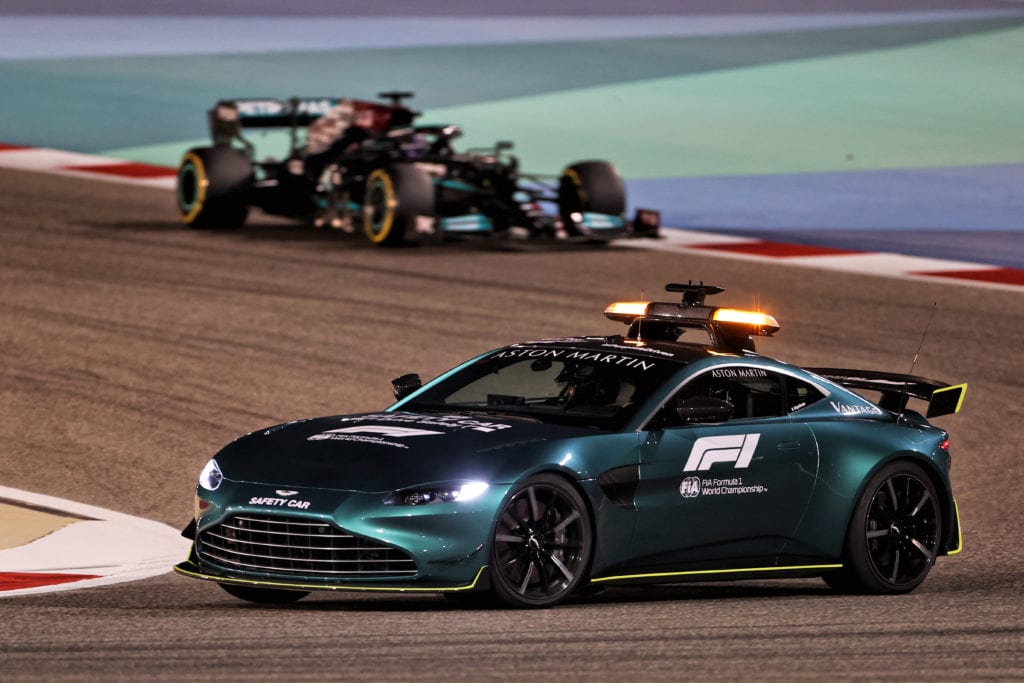 Before we even had lights out, the Red Bull of Sergio Perez was forced to stop on the formation lap. The RB16B straight-up died, with nothing appearing on the steering wheel’s display, but was soon able to get going again. Checo started the race in the pitlane.

As a result of Checo’s issues, the start was aborted, and an extra formation lap added.

When the lights finally went out, the top three remained the same, with Verstappen, Hamilton and Bottas all getting good starts. Norris managed to sneak past his new teammate. However, any first lap fighting was brought to an abrupt end thanks to the Haas of Nikita Mazepin. The kid who has had a total of four spins this weekend added yet another to his tally and completely wrote off his car just seconds into the race.

Safety Car is out after Mazepin hits the barriers on the opening lap! 💥

F1 brought out a full safety car for the accident at Turn 3, and Mazepin became the first retirement of the 2021 season. Pierre Gasly had an early drama, too, losing his front wing and struggling for the rest of the race as a result.

Fans were treated to a brilliant amount of fights for position throughout the entire race.

From an early fight between Charles Leclerc and Lando Norris, to Fernando Alonso, Sebastian Vettel and Carlos Sainz fighting it out later on. There was no shortage of spicy overtaking manoeuvres.

Vettel and Alonso battling in F1 👀

However, the battle that had all of us on the edge of our seats was the fight for the win. After two very different strategy calls from Mercedes and Red Bull, it was a fight until the end for Verstappen and Hamilton.

Hamilton led as the final few laps approached; however, on Lap 41 of 56, Verstappen pitted for fresh tyres. The game was on. 15 laps. 7.5s gap. Oh, boy, did Max deliver.

Max managed to catch up Hamilton, taking huge chunks out of the gap with every lap. By Lap 51, Max was on Lewis’ tail, with only 1.5s between the two – then Hamilton ran wide. 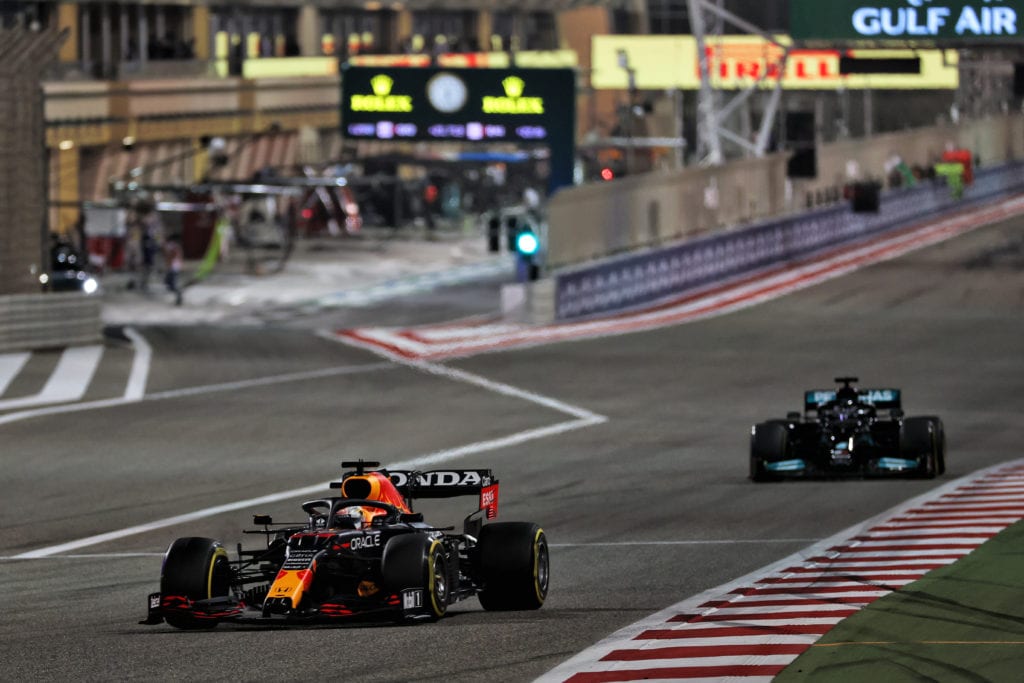 It seemed almost inevitable that Max would pass him on fresher tyres after Hamilton’s error, and he did. The only issue is that Max left the track to complete the switch around, a move that ultimately meant Verstappen had to give the place back. Heartbreaking.

From there, it was like grabbing for a prize that was just out of reach. Whether Max had dirty tyres from going off the track or Hamilton is just the master at keeping calm under pressure, Hamilton crossed the finish line first.

We can all remember what a shocker Mercedes had in Sakhir last year, and those pesky pit stop gremlins were back for Bottas. After Hamilton pulled off a successful stop, Bottas was brought in on Lap 31, but there was an issue.

Another shocking stop for Bottas in Bahrain #BahrainGP #WTF1 pic.twitter.com/P73AIEkrCn

His front-right tyre could not be removed, with the pit crew not realising the issue and the front jackman even pulling away when the tyre was still trying to be removed. Overall, the pitstop lasted a shocking 10.9s and was another nightmare for Bottas in Bahrain.

Both the McLaren boys had a good run in the first few laps, with Lando Norris finishing the race in an impressive 4th place. His new teammate Daniel Ricciardo fell behind the pack but still managed to bring home some sweet points in 7th.

Elsewhere Sergio Perez, who started from the pitlane, fought up through the grid and finished the race in 5th place. Another impressive from Checo on his Red Bull debut. 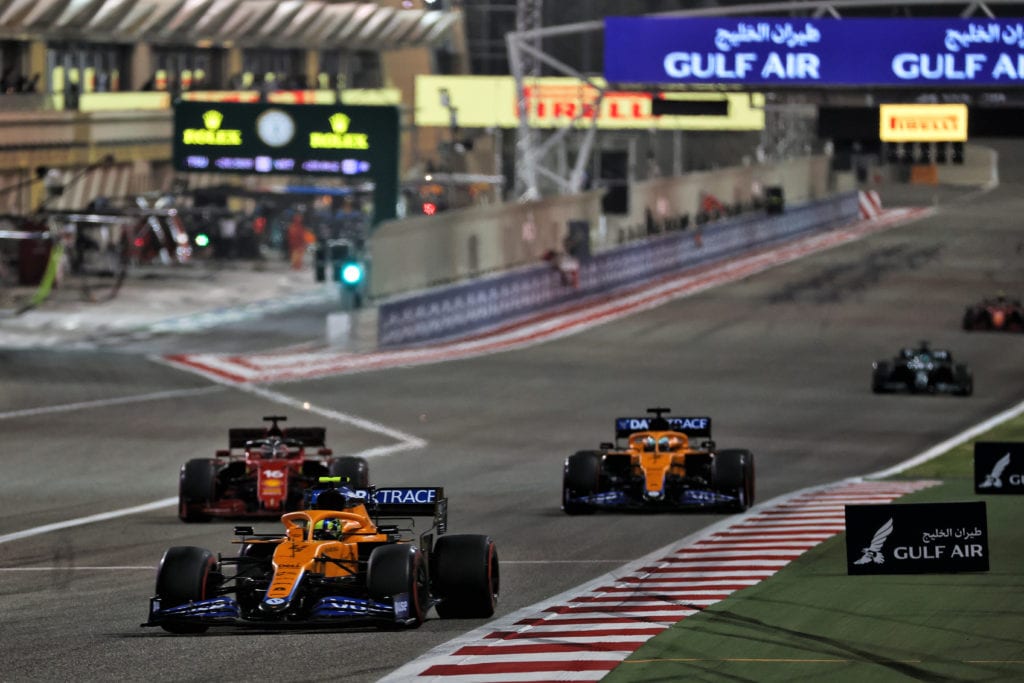 Sebastian Vettel will want to forget this weekend entirely. After a shocking qualifying in 18th, he was given a five-place grid drop and three penalty points on his licence. Fast forward to the race, and although he managed a mega stint on his first set of tyres, he ended up shunting the rear of Ocon’s Alpine and sending them both spinning.

The collision saw him handed a 10 second time penalty and yet another two penalty points imposed, which totals five points that will last 12 months. If you get 12 points, that’s a race ban—something he’s probably very aware of.

Fernando Alonso had a mega start to his F1 come back with an excellent Q3 appearance and started the race in 9th. Despite some exciting battles on track, Alonso was forced to retire due to a braking issue, but we’re sure he’ll still be pleased with his first race with Alpine (retirements aside).

Here's how they finished after a tense and dramatic opening race of the 2021 F1 season 👀#BahrainGP 🇧🇭 #F1 pic.twitter.com/R2bl8pEHHl

What did you think of the race? Best opening race.. ever? Let us know in the comments below.

Here’s Every Penalty Point F1 Drivers Have Going Into 2021

These Are The 5 Biggest Talking Points After F1 Testing