Hamilton Wins With A Puncture As Tyre Failures Affect The Field At Silverstone – WTF1
Skip to content
×
Formula 1 , News

There were a couple of moments early in the race when Alex Albon tagged Kevin Magnussen out on the opening lap, and then later on, a rear tyre failure for Daniil Kvyat at Maggotts sent him into the barriers at high speed. With the majority of the field opting to pit during the safety car, the rest of the race was a bit of a dull procession, with only Romain Grosjean’s brake-weaving antics and Esteban Ocon’s attempts to pass Lance Stroll providing the entertainment.

But in the final laps, everything went a bit mad. Valtteri Bottas, running second, had a front-left puncture just as he passed the pits. The resulting slow lap and pit stop dropped him down the order and out of the points, and he ultimately finished 11th. Carlos Sainz also had a puncture on the last lap while running fourth, dropping him down to 13th.

The real drama was up at the front, though: on the final lap, coming through Luffield, Hamilton’s tyre went as well and he was faced with the prospect of having to drive the second half of the lap on three tyres while staying ahead of Max Verstappen, now running in second – and he did.

It could have been a very different story, though. After Bottas had his puncture, Red Bull opted to pit Verstappen – partly as a precaution against the tyres, partly to allow him to go for the extra point for fastest lap. Had he not pitted, he’d have been close enough to take the win away from Hamilton. Alternatively, he may also have ended up with a puncture and lost out.

Second is still a strong result for Verstappen, though – even if he was so bored during the race that he decided to remind his engineer to have a drink and stay hydrated. Charles Leclerc came through to finish a brilliant third, with Daniel Ricciardo pinching fourth ahead of Lando Norris, Ocon, and Pierre Gasly. A two-stop-strategy (and a five-second penalty for the Magnussen contact) saw Albon recover to eighth, Stroll in an apparently ailing Racing Point ninth, and Vettel 10th, just holding Bottas off to score a point in a thoroughly miserable weekend for the four-time champion.

Further down the order, Grosjean’s alternate strategy only yielded 16th place – and to make matters worse, he faces punishment from the stewards for his dodgy defending. Antonio Giovinazzi had a solid race battling on the fringes of the top 10 but dropped to 14th by the finish, while George Russell did a super job to come home 12th. Kimi Raikkonen had an absolute nightmare race – he was passed by Nicholas Latifi and basically ran last until he had a front wing failure. As for Nico Hulkenberg? He didn’t even make it to the grid – his car developed a power unit problem before the start and his comeback race ended before it had even began.

And the first one by crossing the line with a puncture!#BritishGP 🇬🇧 #F1 pic.twitter.com/ueDrd5BwOo

Hamilton can count himself fortunate that his tyre failure happened as late as it did – one or two corners earlier and it could have been a very different story – and that Verstappen had made a late pit stop, giving him the gap he needed to nurse it home. But it was still a fairly comfortable and deserving victory – every time Bottas tried to close the gap, he had an answer. The result means he now has a 30-point cushion over his teammate and in a shortened season where non-scores have more impact than usual, Valtteri will have to hope for similar misfortune for his teammate if he’s to get back in the title fight.

The real story is going to be about the tyres, though. It’s not the first time the Pirelli rubber has struggled at Silverstone – in 2013 a spate of failures led the manufacturer to completely change the way the tyres were made. It also throws the plan to run softer compounds at the track next weekend into doubt… 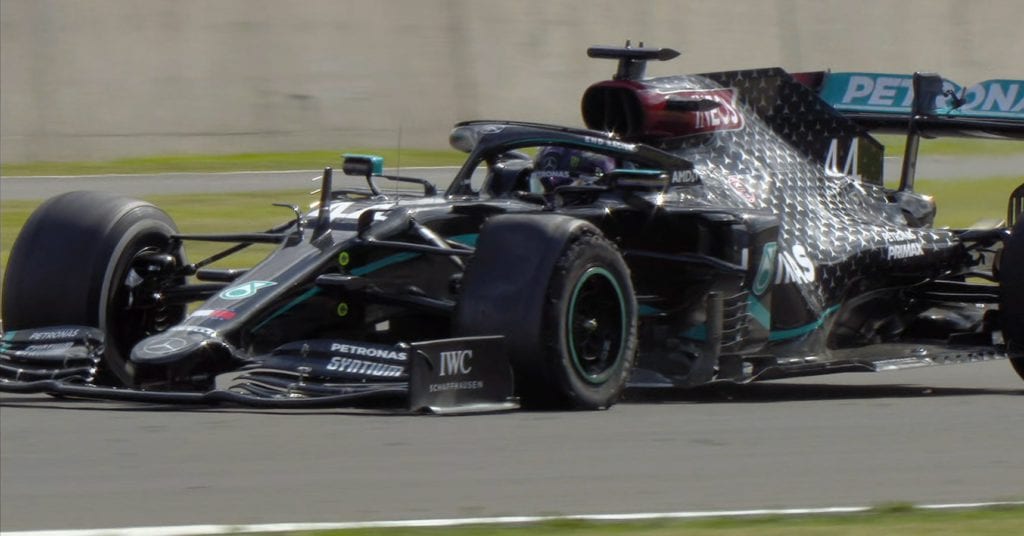