F1 can’t help it if Shanghai’s fog and smog is worse than usual but it did ruin Friday practice for the Chinese GP, with limited running in FP1 and none at all in FP2.

Yep, FP2 was actually canned due to poor visibility, the same issue that caused so little green flag running in FP1. It was so, so boring.

Basically, the cloud was so low, the medical helicopter couldn’t operate and a session can’t take place if that is the case.

Charlie Whiting did say during FP2 that the cloud level was alright at the track, but it was the fog and smog in downtown Shanghai preventing the helicopter from being able to land.

So, effectively, the F1 practice sessions were being dictated by weather conditions over 30 kilometres away. A very, very strange situation.

Max Verstappen was fastest in the 20 minutes of FP1 running, which did include some good spins and a beached Renault in the Turn 3 gravel trap.

Then we were left waiting all through FP2 to see if it would start, only for it to be ditched with 10 minutes or so remaining. Boo.

There are only so many times you can watch a panning view of the empty pit straight, close-up of the rain falling or fans waving at the TV screen rather than the TV camera.

But, if the medical helicopter can’t operate, then it isn’t worth the risk. Especially when conditions were very slippery (people couldn’t stop spinning in the brief window of running in FP1).

The whole red flag/session delay situation did throw up some pretty funny moments though. The FOM caption when this fan dressed up as Darth Vader appeared on the TV feed was hilarious.

Props to F1 for doing that.

There was also the whole ‘Vette’/’Vettee’ banner debacle. A group of fans seemed to have misplaced the final ‘l’ in their favourite driver’s name but it eventually appeared.

Much to Vettel’s delight.

We also had Lewis Hamilton heading across the circuit (technically during a session, but obviously, there were no cars on track) in FP2 to hand out signed caps to the few fans in the grandstand.

So, it wasn’t all bad. But, we’d have preferred seeing these new F1 cars being chucked around the track. 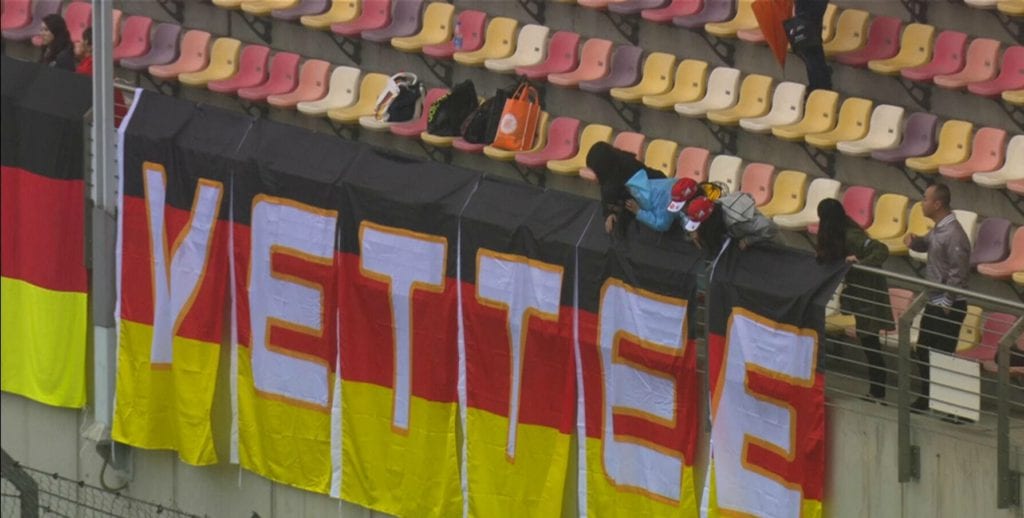