Here Are All Of The Drivers Confirmed For The F1 Virtual GP So Far – WTF1
Skip to content
×
Formula 1 , Gaming

F1 has followed the lead of… well, pretty much every major championship and esports organisation and set up its own championship to help provide some entertainment in the wake of all the real event which have cancelled or postponed.

Although the event was open to all 20 current drivers, unfortunately very few seem to have actually taken F1 up on the offer. Here’s the current list so far.

Johnny Herbert and Anthony Davidson will also apparently be taking part, with the rest of the driver line-up to be announced closer to the time.

Get ready for a different kind of #BahrainGP live on @F1’s YouTube and Twitch! 📺

You won’t want to miss this one 👀 pic.twitter.com/roexCQLbGB

Maybe more will be announced closer to the time bu it’s a shame so few current drivers are taking part. One who definitely won’t be in Max Verstappen – he’s already said he won’t take part because he isn’t used to the F1 2019 game.

That’s not to say there’s a lack of F1 talent, though. Gutierrez, Vandoorne, Hulkenberg, Davidson and Herbert all have a ton of Formula 1 experience between them (though how good someone like Herbert will be remains to be seen – he doesn’t strike me as a recreational sim racer). Shwartzman is an F2 driver strongly tipped to be an F1 star of the future, as is Renault’s Zhou. Dino Beganovich is an F4 driver on Ferrari’s junior programme, Phillip Eng is an extremely successful racer in multiple categories, and although Chris Hoy is best known for his Olympic cycling exploits, it’s worth remembering that the dude is an ELMS champion who’s also raced at Le Mans.

Throw in a load of very good sim racers and we’re sure it’ll be a quality event and an entertaining race. The action starts at 20:00 GMT and will be broadcast on F1’s YouTube, Twitch, and Facebook pages. It’ll also be broadcast live on Sky Sports F1.

Can’t wait that long? Then you’re in luck – after the success of last weekend’s ‘Not the Aus GP’, Veloce will be running a ‘Not the Bah GP’ at 18:00 GMT, featuring many of the same drivers, such as Hulkenberg, Vandoorne and Latifi, as well as Lando Norris. 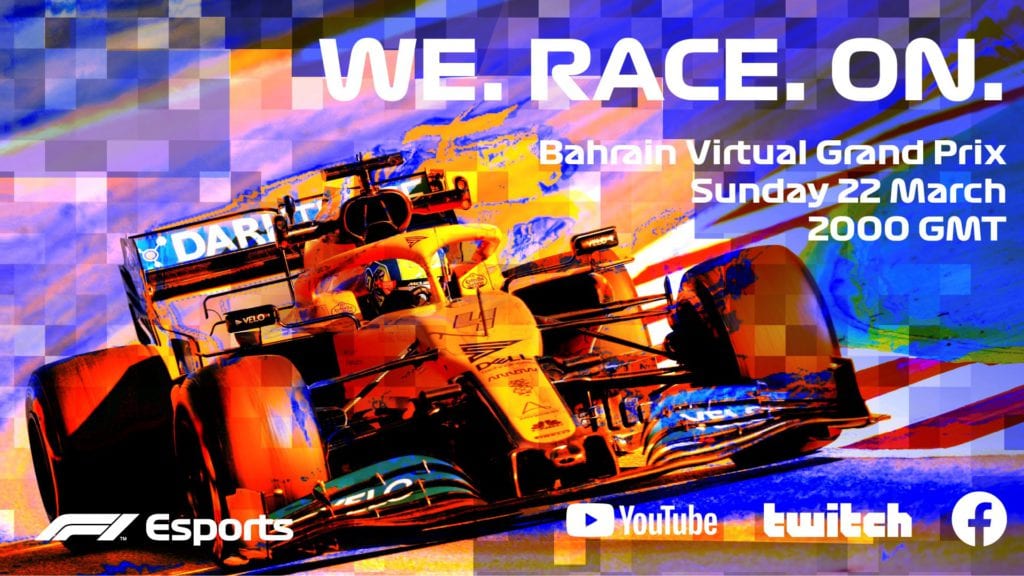