Here Are All The Special Helmet Designs For The Abu Dhabi Finale This Weekend – WTF1
Skip to content
×
Design , Formula 1 , Fun

The final race of the epic 2021 season means that many things are coming to an end. It’s the last race for F1 legend Kimi Raikkonen and his teammate Antonio Giovinazzi, the last dance for engine supplier Honda with Red Bull and AlphaTauri, plus plenty of drivers are moving teams for 2022 and wanting to say thanks.

As a result, there are a huge number of helmet changes for this weekend’s Abu Dhabi Grand Prix, so we’ve compiled them all together for you.

After sporting a new rainbow helmet design for the final three races of the year, the seven-time champ has upgraded the design to feature ✨ all things glitter and sparkles ✨

Once again, Lewis Hamilton is wearing his beautiful #LGBTQ helmet – and this time, it's ready to shine under the lights at the #AbuDhabiGP 🤩✨#F1 @MercedesAMGF1 #Pride pic.twitter.com/RUzEc5rnXc

In his final race for Mercedes, Bottas has had a helmet design that reflects his 101 races with the team. It’s a nice final farewell piece featuring black and white photos along the side and ‘Danke Mercedes’ on the top.

It’s only a small modification, but Max Verstappen wanted to say thanks to Honda with a special message on the back of his helmet. The engine supplier will complete their last race in the championship this weekend.

Okay, this one is very cool. As well as being incredible shiny (seriously, you’re not going to lose this helmet), it also appears to be light reflective. Lando has only teased us with a video on his socials, but lots of people are already calling it the best helmet design of the season!

We can sense a theme here… yet another sparkly design for one of the drivers. This time it’s Daniel Ricciardo who has gone for a very glittery version of the ‘All Good/All Ways’ helmet that he’s been sporting all year. So much colour!

As DJ Khaled says, “another one”. Yes, another driver has decided to go full sparkle under the Abu Dhabi floodlights. To be fair, we don’t blame them. They always look so good!

🤩 Last race of the season deserves a special helmet!! Can’t wait to run with it under the lights!! ✨✨✨✨

Ferrari’s Charles Leclerc has gone for a brand new style this weekend, taking inspiration from his home colours of Monaco. The principality’s flag makes an appearance as a stripe down the centre, with the word ‘love’ all over the lid. It’s a funky Ferrari tribute, and we’re a big fan.

A completely new look for @Charles_Leclerc this weekend 😍

Vettel has used his final helmet design to bring attention to important topics around the world, including Black Lives Matter, LGBTQ+ and refugees. Seriously, we love this man with our whole heart. Protect him at all costs.

You’ll never guess what theme Lance Stroll has gone for this year! Yep, you guessed it. More glitter. Although his normal racing design features a shiny green design, he’s taken it up a level for this Abu Dhabi night race.

Introducing @lance_stroll's #AbuDhabiGP special edition helmet. Who's excited to see this shine under the floodlights? pic.twitter.com/lt8f0vNljw

Bringing an end to his first year as a rookie in F1 and Honda’s final race, Yuki Tsunoda has gone for a special tribute design for his race helmet. It’s almost an inverted version of his existing helmet, which is a cool touch!

I’ve designed a special Honda tribute helmet as my way of saying thanks. Including the years they competed and thank you in Japanese. Ready for one last ride!

In his last race in F1, Kimi has gone for a ‘throwback’ helmet design that was inspired by his early racing days in F1. It’s a big change from his usual red helmet that we’ve been used to seeing, but it’s very cool and a fitting for ‘The Iceman’.

In what is likely to be Antonio’s last race in F1, he’s used the opportunity to say thanks to his teammate Kimi Raikkonen. The design is very Kimi-inspired, and we’ll miss this very under-appreciated bromance from the grid next year.

In his final race for Williams, George Russell has also upgraded his helmet design which features plenty of good luck messages from his current team. So wholesome! No, you’re crying.

Schumacher has switched up his normal helmet design for a darker blue vibe!

Rookie Nikita Mazepin has gone for gold this weekend with his final 2021 helmet design!

What has been your favourite design? Let us know in the comments below. 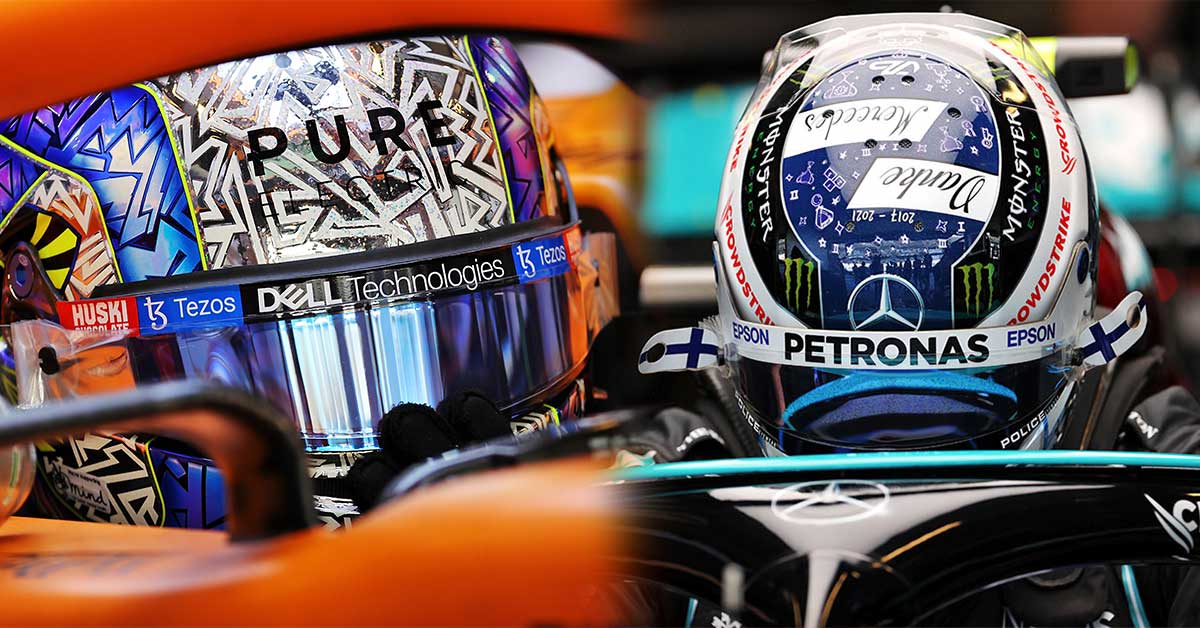