Here Are The 18 Drivers Who Will Race In The Inaugural W Series Season – WTF1
Skip to content
×
Juniors , News

The F3-based championship drew a bit of criticism when it was first announced last year on the basis that it was segregating women from competing against their male counterparts. However, the series’ goal is to give female racers a chance to show their talents at an F3 level before using it as a springboard to progress up the single-seater ladder as it’s often seen as a bit of a bottleneck when it comes to finding sponsorship. With $1.5 million in prizes available (half a million of which goes to the champion), it could certainly do just that.

Interest in the series was pretty big – 55 drivers were initially chosen from over 100 applicants, which was whittled down to 28 after tests in January. Now, following four days of testing in the Tatuus F-318 cars at the Almeria circuit in Spain, the final 18-driver grid has been revealed:

There are also four reserve drivers on standby for the season:

WE ARE IN! Extremely happy to be part of @WSeriesRacing in 2019!❤️🔝 Back into singles-seaters world. So grateful. Feeling like living a dream now!🏎💨 #RethinkRacing #golainaction pic.twitter.com/aVyHkwzOA3

The W Series racing director Dave Ryan picked the first 12 drivers after the first three days of testing, with the remaining drivers competing over the final six slots on the fourth day. David Coulthard also works with the series in an advisory role and said of the process:

“This has been a more difficult selection process than we ever could have dreamt of in terms of how close it has been across the field. The rate of learning has been really impressive to see, and that’s absolutely what we need to see in those who have relatively little experience in single-seaters, but have got natural speed.

“The emotion attached to it has got nothing whatever to do with whether they’re male or female. It’s just that, having had the pleasure of being a professional driver, I know how privileged that is, and I sincerely want all of them who have gone through this process to have professional racing careers at whatever level their talent will allow them to go to. This represents today one big step closer to them realising that dream, and I think everyone at W Series can be proud of their contribution to putting these racers on track, who just happen to be women.”

✨Race car livery revealed ✨ Five striking colour ways will make up our grid in 2019, but which driver names will adorn our cars? #WSeries #RethinkRacing #RaceCar #WomenInMotorsport

For some of the successful drivers, it’s an important step in their careers – 20-year-old Jamie Chadwick won the British GT4 title in 2015, last year become the first woman to win a British F3 race, and earlier this year won the MRF Challenge championship. For others, however, it could be a chance to reignite their single-seater aspirations. For instance, Alice Powell is a double Formula Renault champion and in 2013 became the first woman to score points in GP3, but has spent much of the last few years out of racing due to a lack of sponsorship.

The series will support the DTM at six rounds this season with the first event taking place at Hockenheim on 4-5 May. 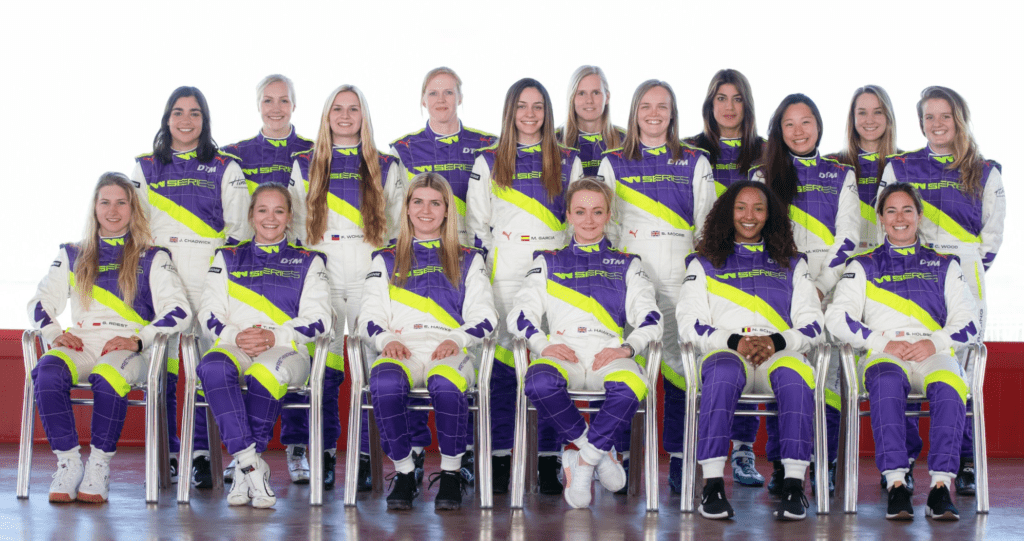