There was a lot going on in the Chinese Grand Prix and plenty of drivers were in a very animated mood over the team radio. Here are some of the best messages from during the race.

Track conditions at the start were extremely tricky and lots of drivers were struggling to get their tyres up to temperature, especially when driving slowly behind the early safety car, as Lewis Hamilton mentioned:

“It’s very hard to keep these temperatures up.”

Alonso was another one struggling with the damp track, so he wasn’t amused when he was reminded to take a drink in the first of many amusing messages from the Spaniard.

“I don’t need f***ing drinks! There is enough concentrating to keep the car on the track.”

Carlos Sainz was the only driver to start the race on slicks, and as the drivers started to get to grips with the slippery conditions he was among the fastest on track. Fernando disputed this claim with another not-so-subtle dig at Honda:

“I’m quickest on track in the corners.”

Alonso came out with another gem when he was caught by Bottas. The Finn was recovering from an early spin and Fernando wondered if the Mercedes had damage. When he was told he didn’t, he couldn’t believe it:

“How he can be behind us? Unbelievable.”

As the race progressed it became clear that two stops was the way to go. Kimi had been struggling more than most and was confused that he was being left out. Perhaps he forgot which team he was driving for. Either way it led to some rare animated exchanges with his engineer.

After being told that staying out was his best chance of a good result, Kimi responded:

“I have so poor front end, f**k they’re just going to catch me so easy. I cannot push in the front. So where are we going to finish? I have no front end and it’s 20 laps to go.”

Ferrari were predicting P3 for Kimi if he stayed out, but he wasn’t having any of it:

“We’re almost three seconds slower and you still think it’s good to stay out? It’s only going to get more worse.”

Apparently his left front was really bad. He did a good job of not mentioning it though:

“It’s still 18 laps to go and the front is already seriously bad. Really bad on the left front.”

There have been some really unexpected comebacks in F1, but Nico Rosberg re-joining Mercedes in the middle of a Grand Prix is the most bizarre one yet:

“So we still have potential for P4 here, Nico. Err, Valtteri.”

The main interest in the closing laps was the battle for the final podium spot between the two Red Bull drivers. After a mega charge from 16th on the grid Verstappen was very concerned about the dirty air from Romain Grosjean’s Haas, and even though he wasn’t particularly close he unleashed his inner Vettel to complain about blue flags.

“Tell Grosjean to move out of the way, please, he just stays in front. It’s ridiculous, mate, I’m losing grip. Can you please keep telling Charlie this is pretty ridiculous.”

Hey, at least he was polite about it.

All three podium finishers we’re pretty happy at the end. Hamilton controlled the race beautifully but Vettel felt he had the pace to win if the race had played out slightly differently:

Thankfully with just a week until Bahrain we don’t have long to wait to find out if he can beat him. That also means it’s just a week until Alonso resumes his new habit of publicly broadcasting his CV during the race, which is quickly becoming a highlight of race weekends. 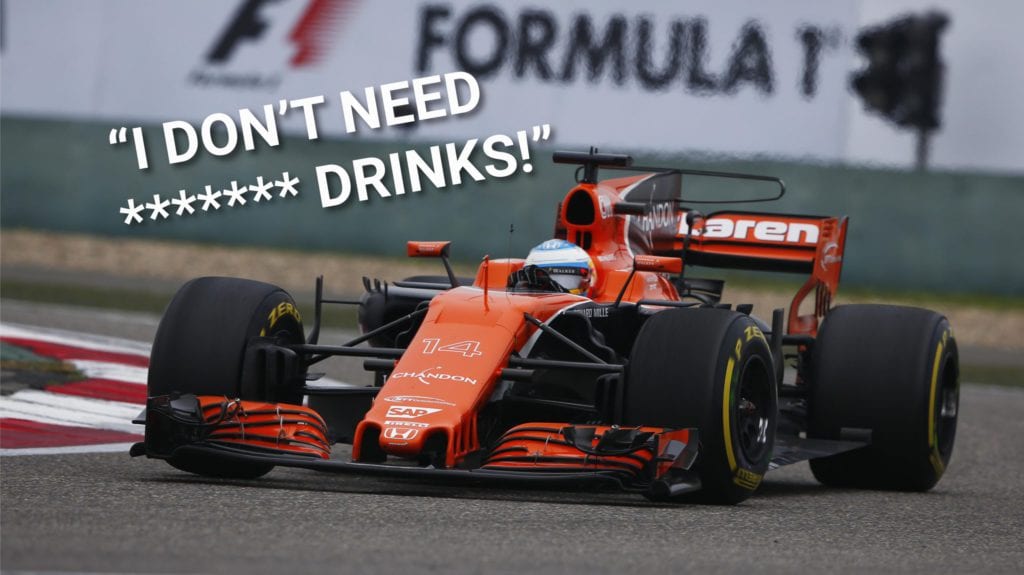