Niki Lauda was an absolute colossus of the sport who had a profound effect on many of the drivers and teams in the paddock, so it’s no surprise to see the lengths some have gone to in order to pay tribute to the man.

Sebastian Vettel has gone with a fantastic Lauda-style helmet, featuring photos of the moment he won each of his world titles.

Vettel said it would be nice to “take him around for a couple of final laps around Monaco.” It’s an awesome gesture.

The team is also paying tribute by adding Lauda’s name to the car in the same script that featured on his Ferraris from 1974-1977.

Haas has also put Lauda’s name on its car, using the same script across the engine cover of the VF-19.

Red Bull and Toro Rosso are both running this special decal on the bargeboards:

Niki 🙏🇦🇹 Our wingman for the #MonacoGP weekend 🏁 #F1 pic.twitter.com/5KM6djXMXh

…as is Racing Point, with a small helmet logo on the Halo.

McLaren has also added Niki’s name to its car:

Understandably, given Lauda’s role with the team for much of this decade, Mercedes has been hit hard by his passing. Lewis Hamilton cancelled his scheduled media sessions ahead of the weekend, and an emotional Toto Wolff described Niki as “the heart and the soul of F1”.

Therefore, the team has gone all-out with its tributes. There’s a message on the nosecone…

…and, following Thursday practice, the Halo of both cars has been painted red.

The team has even hung one of Niki’s iconic red caps on his headset. 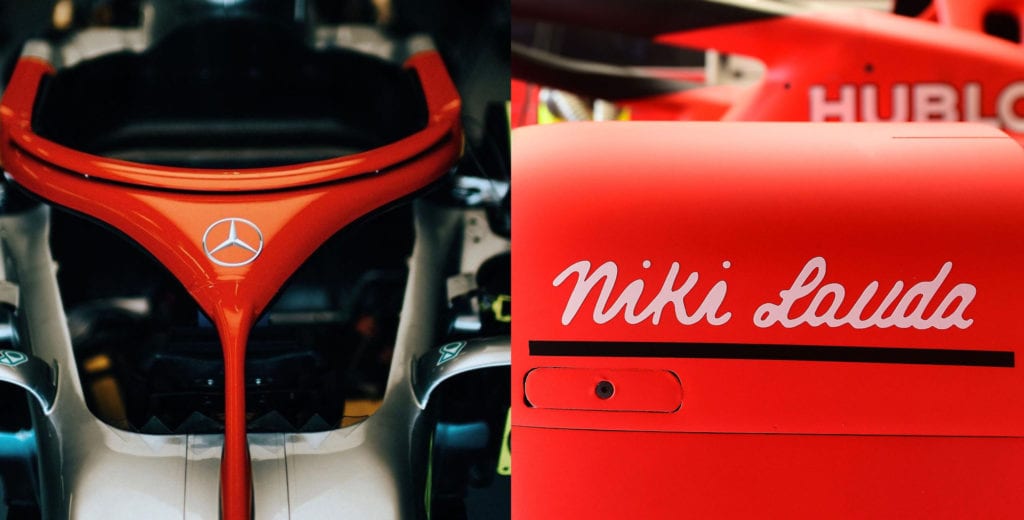