Here Are The Strangest Circuits F1 Has Ever Raced At – WTF1
Skip to content
×
Feature , Formula 1 , Retro
4 comments

When F1 confirmed it would be racing around the Bahrain ‘Outer’ layout, many immediately leapt to criticise the 3.543 km track and stated that it wasn’t a proper circuit. With that in mind, we took a trip down memory lane to see some of the weirdest track layouts F1 has ever raced on.

Undoubtedly, AVUS is one of the weirdest race tracks in F1 history. The 8.3km circuit was essentially two long straights, with a hairpin at each end and resembled more of a dual carriageway than a race track.

The original layout was a staggering 19km long, but shortened several times and ended up being 8.3km for the 1959 Grand Prix. It featured very steep banking on the north curve from the ‘30s up until 1967, and is often hailed as one of the most dangerous circuits the world.

Over time, the circuit hosted a variety of events from motor racing to athletics at the 1936 Summer Olympics. F1 visited the circuit for their first and only official Grand Prix in 1959 on the 2nd August and was won by Tony Brooks.

In an unusual result by modern standards, the top three were all from the same team. Tony Brooks, Dan Gurney and Phil Hill all drove for Scuderia Ferrari in Ferrari Dino 246s. At the time, the 1959 German Grand Prix was the fastest on record, with an average speed of 143.3 miles per hour.

From 1961 onwards, F1 no longer raced at circuits with banking as they were deemed too dangerous.

Today, AVUS is an abandoned and forgotten racetrack of the past. It held a big ‘send off’ race in 1999 but now the tower and offices are used as a motel.

The Nordschleife became the main host of the German Grand Prix, apart from the 1959 season in which AVUS hosted. The track was used between 1927 and 1982 and measured a mindblowing 22.835km and had 160 corners.

With F1 cars being forever modified to make them quicker, the track began to become more and more dangerous to race on. In 1967 a chicane was added before the start/finish straight and three years later in 1970 the race was boycotted as it was seen to be too dangerous. A fatal crash at Zandvoort that year led to drivers demanding changes were made to the Nordschleife but these were not possible in the time frame and so the race was moved to the ‘safer’ Hockenheimring which had been modified.

Following the demands of drivers, armco barriers were added to the track and the track surface smoothed out and bumps removed. However, despite making these changes and going on to host more Grand Prix at the iconic venue, it was decided that racing at the venue was just too expensive and dangerous. The number of marshals needed to safely run the event was more than five times a standard race track, for example.

Most notably, Niki Lauda who was the reigning champion at the time, tried to convince his colleagues to boycott the event in 1976. He didn’t like the idea of racing around such long circuits with so many variable weather conditions. His calls were ignored and the race went ahead.

During that race, Lauda was involved in his life-changing crash and badly burnt. Fortunately, he survived thanks to racing drivers who stopped on track to pull him from the wreckage but the full Nordschleife circuit was never used again in F1.

The Pescara circuit was an astonishing 25.8km racetrack in Italy which only hosted one official F1 championship event in 1957, due to the cancellation of other races that year. It remains the longest circuit, in terms of lap distance covered, to host an F1 race.

Crowds flocked to the circuit, with estimations being that 200,000 spectators were present to watch Sir Stirling Moss take victory in his Vanwall VW5, followed by Juan Manuel Fangio in second and Harry Schell in third.

Being a road course, it took place throughout several villages and made a rough triangle shape. Featuring, not one but two 5.5km straights, the track was seen as being so dangerous that even Enzo Ferrari didn’t allow his drivers to compete in the 1957 Grand Prix.

Fangio, who put his Maserati on pole for the race, set a pole time of over 9 minutes and achieved an average speed of 98mph during the lap. However, Moss was the one who took victory with a race time of 2 hours and 59 minutes. Fangio finished over 3 minutes behind him in second.

A circuit we all know and love. But, it has to be admitted what a bizarre circuit layout it really is. Being held around the tiny principality of Monte-Carlo, the race has been held every year since 1955 (apart from 2020) and is associated with some of the biggest moments in the sport’s history.

Being such a narrow track and with big elevation changes, it’s well established for being a beast to tame but if you achieve victory at the race it’s one of the biggest achievements an F1 driver can have. A win at the event is also part of the historic ‘triple crown’ in motorsport.

Featuring a tunnel and tight hairpins, the length of the circuit is a very short 3.337km and has seen a huge amount of safety precautions introduced over the decades as it held around the streets of Monaco. Before the introduction of armco barriers, drivers would crash into buildings, train stations, trees and even the famous harbour on more than one occasion.

As well as the introduction of chicanes to make the track slower, the pits were also relocated away from the seafront.

Many drivers have dominated at this circuit such as Graham Hill and Michael Schumacher who have both won the race five times, as well as Ayrton Senna who has won the race a record six times.

A rich sport like F1 and Las Vegas should go together in perfect harmony, right? Wrong. Sin City was not as glamorous as you might imagine, with a super boring circuit being erected in the middle of a car park.

There was little to no elevation change, being in the middle of the Nevada desert, and has often been referred to as the ‘worst circuit F1 has ever been to’.

The circuit design was rubbish and being anti-clockwise put massive strains on the necks of the drivers. The length of the track was 3.650km and only held two races.

Being in a desert too, the heat was ridiculous and dangerous for drivers. After the 1981 Caesars Palace Grand Prix, Nelson Piquet needed over 15 minutes to recover from extreme heat exhaustion and almost didn’t make it to the finish line – being crowned World Champion at the same event.

Being held in the famous Caesars Palace Hotel car park, the track was wide in places and of course a temporary circuit. Although the hotel thought hosting the two races in 1981 and 1982 would be financially rewarding, it in fact had the opposite effect and they made big losses by running the event in their car park.

F1 never returned after 1982, but talks of another Las Vegas Grand Prix are always being rumoured.

The 10km track, which included a 4.250km oval, saw both Stirling Moss and Phil Hill win two Grand Prix each. The oval part of the track featured high and steep banking and as discussed earlier in the article, banking was banned from F1 in 1961 after an accident at the Grand Prix.

During the 1961 event, Wolfgang von Trips was involved in a collision with Jim Clark which sent von Trips’ car airbourne and into barriers killing himself and 15 spectators. Although this accident did not happen on the actual oval part of the circuit, it was the final example for F1 to ban racing on banking.

The 10km circuit, which included the oval, and another 5.750km course, allowed cars to run parallel on the main straight. 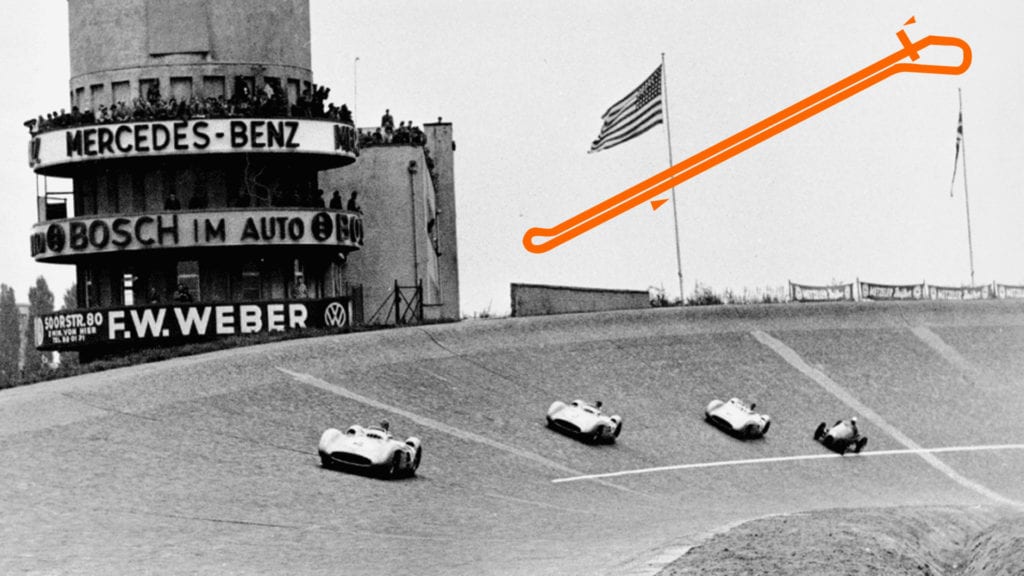