The F1 Fan Festivals are quickly becoming a big part of the F1 calendar with special events taking place in city centres around the world and helping to bring the sport to a whole new audience. This year will see four events take place – later in the year the festival will go to Chicago, Los Angeles and Brazil, but the first took place in Shanghai this weekend.

Now, for a fan festival centred around F1, you need obviously need an F1 car – and this is what’s being used:

Called the HF1, the F1 Festival Car has been built by the Heritage team and for this weekend has been decked out in a special snazzy livery to celebrate the 1000th world championship race.

The person behind the wheel of the HF1 for these events is British racer Jessica Hawkins – a karting champion with a history in single-seaters and tin-tops who’s also set to race in the inaugural season of the W Series this year.

As an avid F1 fan for her whole life, Hawkins first got the opportunity to drive with Heritage last year, telling WTF1:

“I’ve been watching F1 since before I can even remember, it’s been a huge part of my life. The race that’s most memorable to me is the last race of the season in 2008 when Hamilton took his first world title on the last lap! It was incredible to watch and feel the emotion.

“I was invited by Heritage to drive at the Silverstone Classic in 2018 for a demo run. The test went very well and subsequently they offered me a full-time role as factory development driver, which I was more than happy to accept! I’ve been helping them develop their HF1 car which is what I’m driving here at the F1 Festival.”

The car itself isn’t just a simple showcar, either – it’s been developed by Heritage both for track days and to put on spectacular performances at just this sort of event:

“The HF1 [was] built by the team at Heritage as a fully running F1 car. It is based on a 2011 chassis with a new, in-house developed turbocharged power unit and run by the team at Heritage. The car really whips – it’s rapid! For this event it has a special one-off livery which is incredibly detailed, and my lid matches the design too, which is awesome.

“I’m planning on putting on a great show – practice starts, donuts and massive skids! Something for the crowd to remember. We’re running from noon local time on Saturday in the streets of Shanghai.” 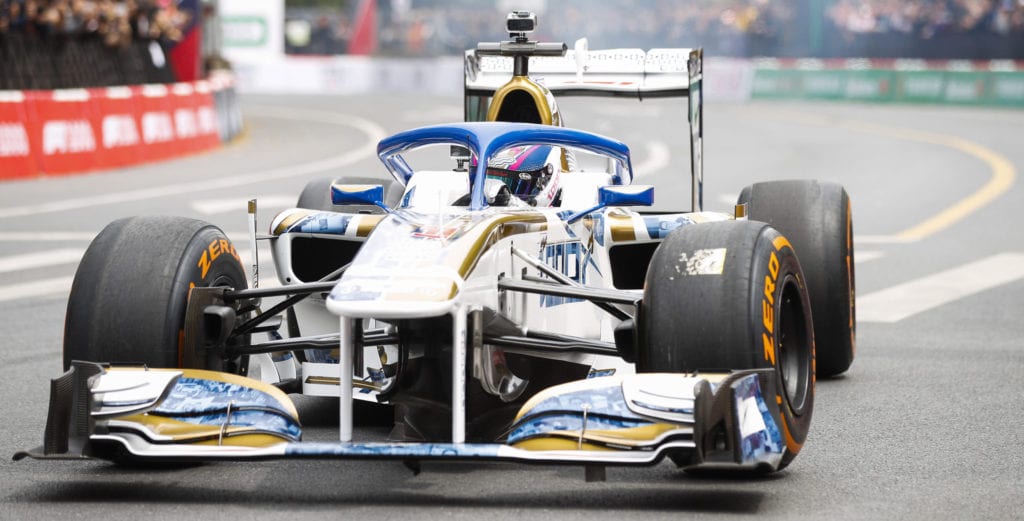