Here’s Eddie Cheever Having Some Awesome Battles With René Arnoux

Sometimes certain drivers have a habit of repeatedly tripping over each other on track – think Valtteri Bottas and Kimi Raikkonen in 2015, or Lewis Hamilton and Felipe Massa in 2011. In early 1983, those two drivers were Eddie Cheever and René Arnoux.

Arnoux was in his first season for Ferrari having moved from Renault whilst Cheever was his replacement at the French squad. At the second race of the season at Long Beach (the one where John Watson won from 22nd on the grid), Arnoux was making a late charge through the field after a tyre stop when he came up behind Cheever. He was much quicker but Cheever wasn’t having any of it.

Arnoux got ahead and went on the finish third but Cheever didn’t have a chance to retaliate – his gearbox gave out shortly after being passed.

A few races later at Monaco the pair found themselves battling again. On a damp circuit Arnoux was all over the back of Cheever in the early laps and launched an attack up the inside of the first corner.

A switchback at Ste. Devote? You betcha! Arnoux got ahead soon after but ended up retiring from the race after clouting the barriers. Cheever dropped down the order and eventually retired when his engine gave way.

Whilst Arnoux was a race winner and qualifying beast (he took 18 poles, more than any other driver without a championship), Cheever never quite managed to reach the top step during his time in F1 from 1978 to 1989. His single season at Renault was the most competitive car he raced, though he did manage nine podiums during his career – three of which were on home turf in the USA. 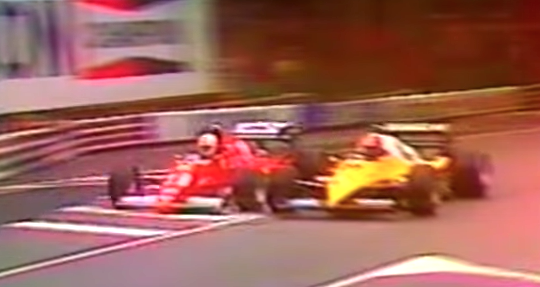