Here’s Every Penalty Given Out Over The Austrian GP Weekend – WTF1
Skip to content
×
Feature , Formula 1 , Penalties

The stewards were on a mad one in Austria this weekend, and was penalties galore during and after the race! In fact, there were only four drivers that got off without an investigation into them over the three days, with ten drivers handed penalties and a further six being investigated.

To help you keep track, we’ve compiled a lovely, long rundown of every penalty given out during the whole Austrian GP weekend.

Reason: forcing Leclerc off the track during the race.
Punishment: five-second penalty and two penalty points.

Reason: forcing Leclerc off the track during the race… again.
Punishment: another five-second penalty and two more penalty points.

Checo was also summoned to the Stewards office after the race on Sunday for not respecting double waved yellows for the Raikkonen and Vettel crash, but no further action was taken.

Reason: forcing Perez off the track during the race.
Punishment: five-second penalty and two penalty points.

The two additional penalty points takes Lando’s total up to ten for the last 12 months. Two points do expire on the 10th July 2021, but will still leave him with eight points for the rest of the season. 12 points is a race ban.

Speeding in the pit lane is a fairly common penalty and just sees the team fined depending on how fast over the limit they were going. The pit lane is set to a speed limit of 80km/h and is imposed during the whole weekend, unless changed by the Race Director. Any team that goes over that is fined €100 for each km/h above the limit, up to a maximum of €1000. There are different rules for the race, which can be seen under Stroll’s penalty this weekend.

Esteban didn’t get a penalty or any penalty points for the offence.

If a driver exceeds the 80km/h speed limit in the pit lane during the race, the Stewards can impose a five or ten -second time penalty, a drive-through penalty or a ten second stop-and-go time penalty. Stroll received the first of these options.

Stroll didn’t pick up any penalty points for this offence.

As seen under Esteban Ocon’s penalty, the team can be fined up to €1000 depending on how much they exceeded the pit lane speed limit. Kimi didn’t get a penalty or any penalty points for the offence.

For the incident on the final laps of the race with Vettel, the Stewards heard from both drivers and with other evidence decided that “exiting Turn 5 Raikkonen closed the door on Vettel, which caused a collision taking both cars off the track”.

Kimi now has six penalty points over the last 12 months, with one point expiring after the British Grand Prix later this month.

Giovinazzi got a five-second penalty during the race for going into the pits and passing Alonso before reaching the first safety car line, all whilst the safety car was deployed. The two penalty points he received now takes his total up to five for the last 12 months.

Twice during the race Tsunoda ignored the Race Directors’ instruction, which was that for safety reasons drivers must keep to the right of white line preceding the pit entry which starts approximately 50m before Turn 9.

Yuki now has four penalty points in his rookie year, including the two from the Austrian Grand Prix.

Reason: not respecting double waved yellows for the Raikkonen and Vettel crash during the race.
Punishment: 30-second penalty post-race and three penalty points.

Not respecting double waved yellows is a bad offence and given a strong penalty. The Stewards analysed  Mazepin’s telemetry and it was decided he did not slow down sufficiently for the double waved and yellow sector.

Nikita is now on five penalty points for his rookie year in F1.

Reason: not respecting double waved yellows for the Raikkonen and Vettel crash during the race.
Punishment: 30-second penalty post-race and three penalty points.

Like Mazepin, Latifi also did not respect double waved yellows and was given the same penalty.

Latifi is on six penalty points, the same number as his teammate George Russell.

The penalties that were given weren’t the only investigations keeping the stewards busy though eight drivers were summoned over the weekend for investigations that resulted in no further action.

Reason: Moving under braking whilst defending from Raikkonen

Reason: Not respecting double waved yellows for the Raikkonen/Vettel crash 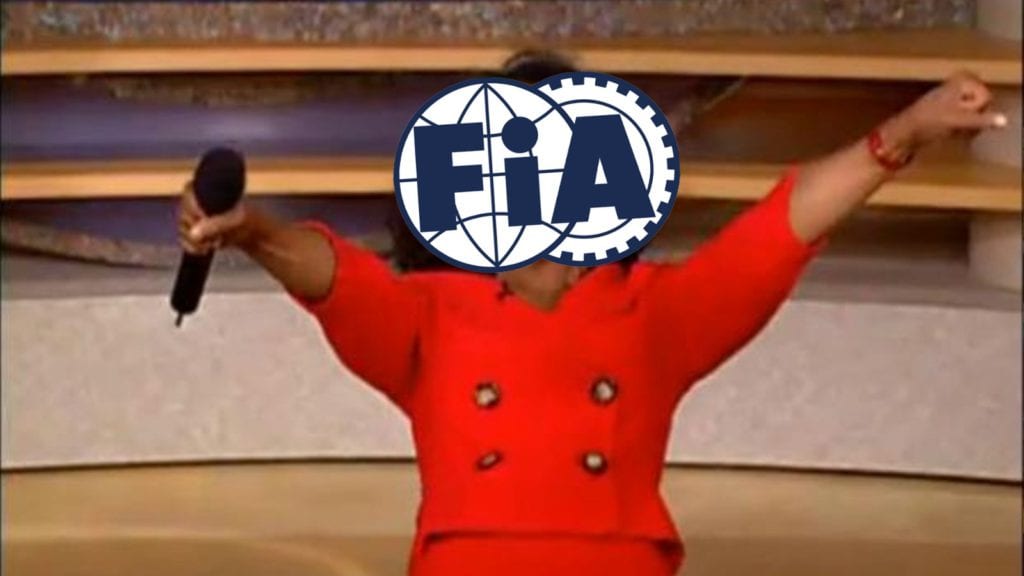