Here’s How An F1 Driver Gets Strapped Into His Seat

For any F1 driver making sure the seatbelts are done up properly is incredibly important, for a number of reasons. Safety is obviously the main one, but comfort is also an important factor to consider. Loose or ill-fitting straps could cause a driver to move around in the car under the huge G-forces generated by the car, and any distractions are obviously going to have a negative impact on performance. Being so tightly strapped in also helps the driver to feel what’s going on with the car better.

Because the cockpit it so confined drivers can’t really do the belts up themselves, so a mechanic has to do it for them. Having a good relationship with their mechanic is important because the position of the seatbelts can lead to some slightly… ‘intimate’ moments.

Force India made a video during the Spanish Grand Prix weekend showing how Esteban Ocon gets strapped into his car, with his front-end mechanic Harry Rush talking us through the process.

It’s pretty cool that teams are not only putting out cool little informational films like this, but also that they’re able to doing it during a race weekend. Liberty Media has relaxed the rules on video restrictions during a Grand Prix weekend this year and it’s great to see teams like Force India taking full advantage of it. 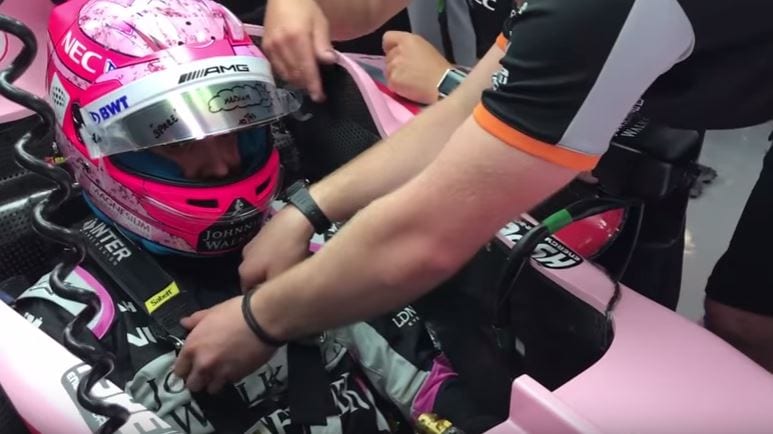