Here’s How Fernando Alonso And Jimmie Johnson Got On During Their Car Swap – WTF1
Skip to content
×
Formula 1 , Nascar

If you ever got the opportunity to drive an F1 car you’d be pretty excited, right? Seven-time Nascar cup champion Jimmie Johnson certainly was when he got behind the wheel of the 2013 McLaren MP4-28 as part of a car swap with Alonso.

As is usually the case with first-time F1 car drivers, Johnson mentioned that it was the braking forces that shocked him the most.

He also said that the speed was so great that on the straights his helmet was being lifted up off his head. That required an impromptu stop to fit a small windscreen, which seemed to solve the issue.

At the start of the day, Fernando took the car out for a few laps and Johnson impressively managed to get to within three-tenths of his best lap, despite it being his first time on a road course in a single-seater.

As for Alonso in the stock car? Well, it’s big, powerful and rear-wheel drive and despite being a world apart from F1 in terms of tech, Fernando said it was huge fun, telling Autosport:

“I knew that the cars were very basic in terms of technology. Last time I ran H-gearbox was in 1999 so it was going back a lot in time. The car was very powerful for the amount of grip available, so you have fun driving on the race track. Maybe with other cars around it is different but definitely alone it was a lot of fun.”

What an experience to drive a @nascar car for the first time today. @jimmiejohnson and I we will remember this day 😁👏🏻! Thanks @teamhendrick and @mclaren to make it possible 😇 #f1 #nascar #JJALO

By the end of the day, Fernando had actually gone four seconds faster than the installation lap set by Johnson that morning (not that the times from the day really mean anything) but still felt there was more to understand with the car, telling ESPN:

“I think I was very far away from a very good lap. Driving style, it was still not very clear to me what is the best way to perform a lap. I found a lot of problems on braking, because the car has very poor retardation because of the weight of the car and the steel brakes. I think they behave very differently compared to the ones I am used to, and traction, these tyres with the amount of power that those cars have, it is very difficult to manage, so in first gear, second gear, third gear you are still spinning the tyres.

“I didn’t know if it was better to go full throttle and spin the tyres and really move forward or control with the throttle and maybe lose a little bit of performance on exit. So at the end, I think…it is not so clear for me even after one day what will be necessary on these cars.”

The day was rounded off in the only way every motorsport event should finish – with a load of donuts. Nice.

It’s not a proper car swap without doughnuts… The @F1 car was a bit tricky in the beginning but I figured it out. 🤙🏼 #JJxALO @McLarenF1 @alo_oficial

So, will we see Alonso racing in Nascar in the future? Fernando remained typically vague, though Zak Brown said he’d like to get him to do a road course race, while Johnson wants to get him to try a stock car on an oval, since that’s where they’re designed to work best.

Johnson, meanwhile, remained so impressed by his first single-seater experience that he said he’d like to try some road course races in IndyCar in the future.

Seat swaps are just awesome, aren’t they? We need more of them! 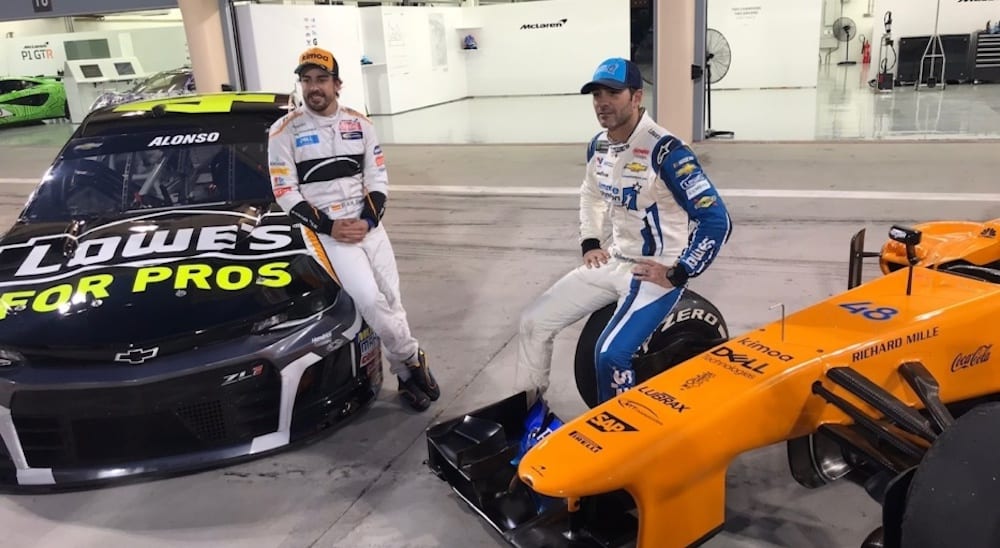