Today marks a quarter of a century since Michael Schumacher went from being a fast driver with a bright future to an actual world champion – and the tip of the iceberg when you consider what he went on to achieve.

However, the way in which he won it has always been a bit contentious. Leading the title-deciding race in Adelaide, he went off and hit the wall and then, one corner later, collided with Damon Hill. Both cars retired, Schumacher clinched the title by a single point. It’s one of the most famous moments in F1 history and the image of Schumacher’s Benetton flying through the air sideways has become iconic.

The 25th anniversary is one worth celebrating, so we’ve highlighted some of the key moments from the events and given a brief description of what actually happened and then added in how it would have gone down in 2019. Let’s get stuck in like the front wheel of a Williams into a Benetton’s sidepod.

Qualifying:
1994: Rain during Saturday qualifying means the grid is ordered by Friday’s lap times, as was occasionally the way with the old two-day qualifying format.
2019: Teams and drivers demand a change to the format, saying that the current system is unfair. The FIA comes up with an alternative which teams then inexplicably vote against.

1994: 41-year-old Nigel Mansell takes pole position for Williams, marking the first time all year that Hill has been outqualified by a teammate since Senna died. Everyone congratulates Mansell.
2019: Nico Rosberg’s Australian GP vlog – IS HILL’S CAREER OVER!? [rosbergexplosionmeme.jpg]

Race start
1994: Schumacher and Hill shoot into an early lead. Hill is second but following closely, the pair of them exchanging fastest laps in a tense fight.
2019: Fans start complaining that Hill can’t get close enough to try a pass and wish that the DRS zones had been extended for the race. The word ‘boring’ starts trending on Twitter for some reason.

Lap 18
1994: Both drivers come in together for their first of three stops and exit in the same order: Schumacher ahead of Hill.
2019: Hill questions his team for pitting him on the same lap as his main rival, before realising that refuelling was a thing in 1994 and he literally had no other option.

Lap 64
1994: Gerhard Berger has taken the lead following the final round of pit stops, but loses it to Mansell again following a mistake.
2019: Nobody cares because Twitter is up and running again and everyone is arguing about the Schumacher/Hill incident.

Lap 81
1994: Mansell takes his 31st and what would be his final win, with Berger second and Martin Brundle third.
2019: Everyone briefly stops arguing to wonder how Brundle managed to simultaneously commentate on the race and finish on the podium in a McLaren.

Post-race
1994: Hill is disappointed but dignified in defeat, telling media: “People got their money’s worth and we gave them a topic of conversation for many years!” Schumacher defends himself in the incident, saying that he didn’t see Damon until it was too late.
2019: Every single F1 fan is glued to their phone or laptop and has a minimum of 16 tabs open, constantly refreshing and waiting for the stewards’ verdict.

1994: F1 personalities have their say. Alain Prost understands Schumacher’s reaction to turn in on Hill; Bernie Ecclestone says that if Schumacher can live with what he’s done then he’s fine with the incident; Jack Brabham says Hill was too impatient in trying to overtake so soon.
2019: The stewards’ verdict is out – it’s a reprimand for Schumacher, two points on his licence and, mysteriously, a 10-place grid drop at the next race. The race result is unaffected and the confusing grid penalty is later rescinded (apparently due to an ‘administrative error’).

1994: The F1 community in general feels that Hill had been hard done by, but grudgingly accepts the result as part of modern F1 because the championship had been decided in a similar way in both 1989 and 1990.
2019: Jacques Villeneuve claims that neither Hill nor Schumacher was to blame for the incident. Instead, he comes up with the ridiculous theory that Mansell used secret telekinetic powers to cause the collision as he quite enjoyed being the most recent British world champion and didn’t want Hill to steal his thunder. 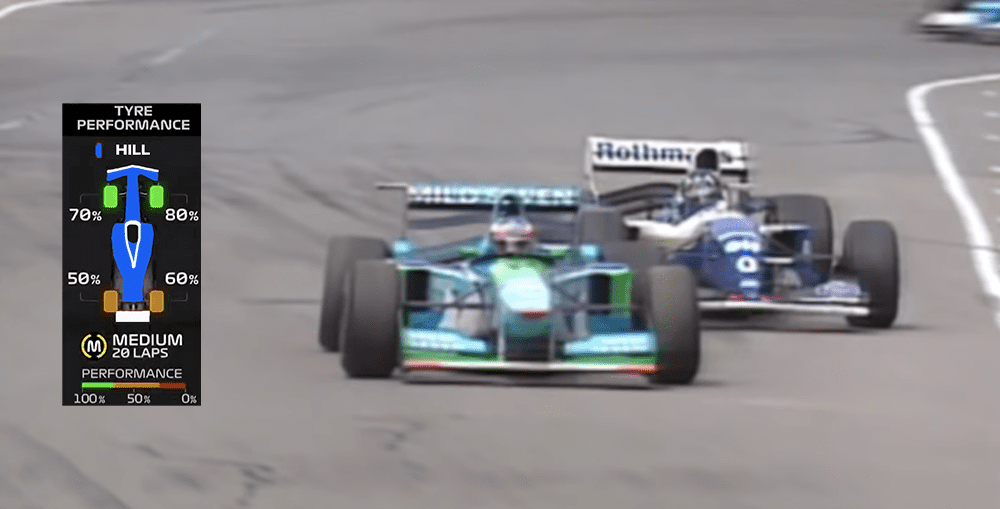