F2 returns this weekend after a two-month break, and all eyes are on the nine contenders who can still mathematically clinch the drivers’ title over the final four races.

Although there are a handful of drivers who are still in with a chance of taking the title, the two favourites are PREMA Racing’s Mick Schumacher and UNI-Virtuosi’s Callum Ilott.

Schumacher currently leads the standings and has done since Round 9 at Mugello, with a 22 point lead to Ilott, but that doesn’t guarantee him an easy journey to the championship victory.

To win the title this weekend, Schumacher will need to finish Sunday’s Sprint Race with a 49-point lead to Ilott. Quite the points haul, but possible if Ilott struggles around the Bahrain International Circuit.

Unfortunately for Schumacher, Ilott has done the opposite and secured pole position for Saturday’s Feature Race in spectacular style. This has not only placed him ahead of Schumacher for the race but also earned him four championship points, taking the gap between the two to just 18 points. Exciting!

Schumacher will now have to secure 31 points throughout this weekend’s Bahrain Grand Prix activities to leave as champion.

For those of you who aren’t familiar with F2, each weekend hosts two races. A Feature Race which is held on Saturday and a Sprint Race which is run on Sunday.

The points system for the Feature Race is similar to that of an F1 points system, with 1st place being awarded 25 championship points and 10th getting just a single point.

For the Sprint Race, the points on offer are much lower. There are only points available for the top eight, with 1st place only offering you 15 championship points.

With each race, there is also the chance to pick up two points for fastest laps if a driver has completed 90% of the total race laps and also finishes in the top ten.

There is also the additional four points on offer for pole position, which Ilott bagged on Friday’s running.

For Schumacher to win this weekend he will need almost everything to go his way and Ilott to have the races from hell, but motorsport has certainly dealt us a few strange hands this year so never say never.

With Illot scoring those vital four points for pole position, he has made sure the championship will go down to Sunday’s race. If Illot DNFs in the Feature Race, Schumacher could still win the race and take the two points for fastest lap and head into the sprint race with a 45 points lead – he needs 49 points to take the championship.

There is also the statistic that Schumacher has only has two race victories this year, in comparison to the three that both Illot and Robert Shwartzman have won.

Either way, there are far too many ways this championship could be won or lost by Schumacher or Illot this weekend for us to count, but just remember that Schumacher needs to be clear of Illot by those 49 points after Sunday’s race or else it all goes down the season finale at the Bahrain ‘Oval’ as it is being nicknamed.

Oh, and not forgetting the other seven drivers that are still in with a mathematical chance. Yuki Tsunoda, Christian Lundgaard, Shwartzman, Nikita Mazepin, Louis Delétraz, Guanyu Zhou and Luca Ghiotto could all technically take the championship crown too.

It certainly would be very 2020 for the total underdog to storm and take the drivers’ title.

Who do you think will be the F2 champion this year? 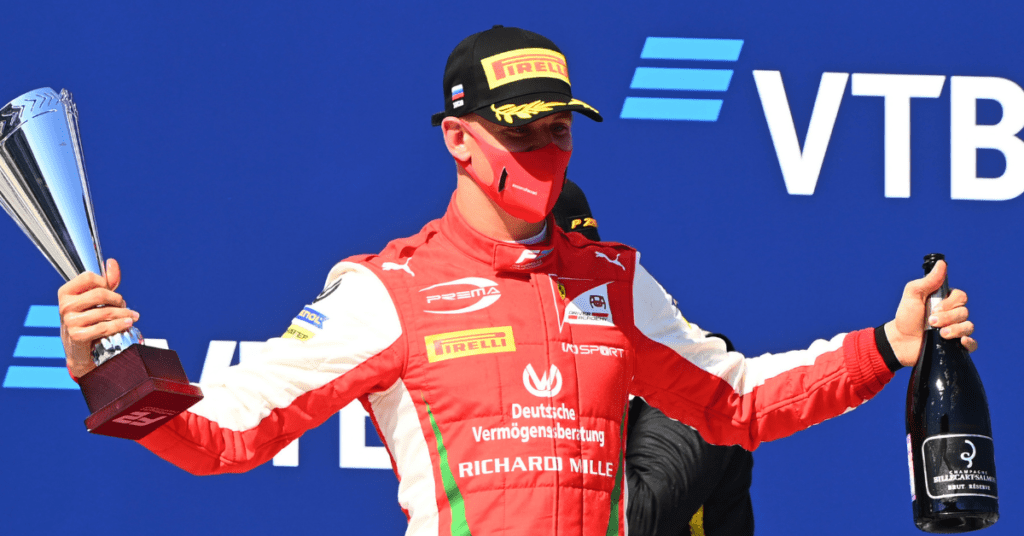