Our Favourite Kvyat Moments From His Time In F1

After the announcement that Yuki Tsunoda was to be accompanying Pierre Gasly at AlphaTauri in 2021, poor Daniil Kvyat is out of a race seat and it looks unlikely he’ll be returning to F1 in the near future. As a sort-of goodbye, we’ve compiled our all-time favourite moments from the ‘Torpedo’.

The Torpedo Was Born

It was given to him by Sebastian Vettel at the 2016 Chinese Grand Prix, after Kvyat pulled an ambitious move that resulted in Seb hitting his then-teammate Kimi Raikkonen into Turn 1.

Both Vettel and Kvyat made it onto the podium, where one of the most notorious cool down room exchanges happened. Nico Rosberg seemed thrilled with his win, whilst in the background Daniil drops an absolute corker asking what Vettel was doing at the start of the race.

“YOU? Asking what happened at the start?,” Vettel replied, totally taken aback by Kvyat passing the blame onto him.

“If I didn’t go to the left, you would’ve crashed into us and all three of us would have been out.”

“Well I was racing,” Kvyat started, attempting to defend himself.

“No ‘well’,” Seb quickly interrupted. “You came like a torpedo.”

“That’s racing,” continued Daniil, clearly still filled with adrenaline and on a mission.

“Ah racing, but if I keep going the same line we will crash.”

Meanwhile, Rosberg slips awkwardly on his water bottle and is trying not to get involved in the drama unfolding. Us fans already had the popcorn on standby.

Initially intended as an insult, suggesting that Kvayt’s driving style was reckless and caused mass damage wherever he went, Daniil actually embraced the nickname and even had a design printed on his race helmet which showed him on the missile for his home Grand Prix in 2017.

How cool does that look though?!

He’s also continued to have a great working relationship with Vettel, with the two of them going on to collaborate alongside each other when Kvyat was a Ferrari development driver in 2018.

However, Daniel Ricciardo went on to poke fun at Kvyat and Seb once more in a press conference before the 2017 British Grand Prix. Asked whether he had received a recent invitation for Vettel’s 30th birthday bash, Kvyat said he “did not have an answer” for the journalist.

Ricciardo being Ricciardo didnt let it slide though, going on to say “there was an invite for the Torpedo. I saw it.”

Hamilton, who joined the duo in the presser, was clearly unaware of this nickname and went on to ask “what’s the torpedo?”

“It’s what Seb called [Daniil] in China last year,” Danny Ric replied with both Hamilton and Riccardo having a giggle.

“You have a good memory, don’t you,” Kvyat was quick to snap back with a smile on his face.

Dancing In The Rain

Of course, both Kvyat and Ricciardo were previously teammates at Red Bull Racing back in 2015. Kvyat actually ended up out-scoring Ricciardo that year which many quickly forget, but one of the pairings most iconic moments was of course THAT dancing during the Grand Prix at Austin.

With heavy rain causing mass delays to sessions, teams and drivers up and down the grid took it upon themselves to offer some entertainment to the thousands of fans who were sat patiently waiting in the grandstands.

From boat races to Mexican waves, the paddock put on a performance whilst we waited for the rain to stop and qualifying to start. However, it was an impromptu dancing session from Kvyat and Ricciardo that most fans will remember. The holding of hands and fancy pirouettes made for some strange but hilarious viewing.

Being part of the Red Bull family, Kvyat has also had to do his share of random promotional videos.

The best of these was his ‘Russian driving test’ in which he travelled to Moscow to earn his national drivers’ licence. Kvyat did so in a very chaotic way, always slurping on a can of Red Bull, and absolutely terrifies his instructor. We’re 99% this is a joke, but it’s kinda how we imagine all racing drivers doing their driving tests.

Finally, you can’t have this list without Daniil’s famous Romain Grosjean impression to the media after the 2019 Bahrain Grand Prix. Taking the piss out of Grosjean’s strong French accent, he suggested that all Grosjean does is complain about other drivers and how they “sent [him] to the moon”. Then follows a load of inaudible french noises but it’s still one of the most random post-race interviews we’ve seen.

Other highlights from Kvyat’s no nonsense chats after the races include talking about a penalties being “bullshit” and straight up announcing that AlphaTauri were signing Tsunoda in place of him before it had even been confirmed.

Kvyat has had an unusual and turbulent career in F1, but over the course of his 110 F1 starts and three podium appearances, he’s brought us a lot of laughs and great racing and he’ll be a missed presence in the paddock. 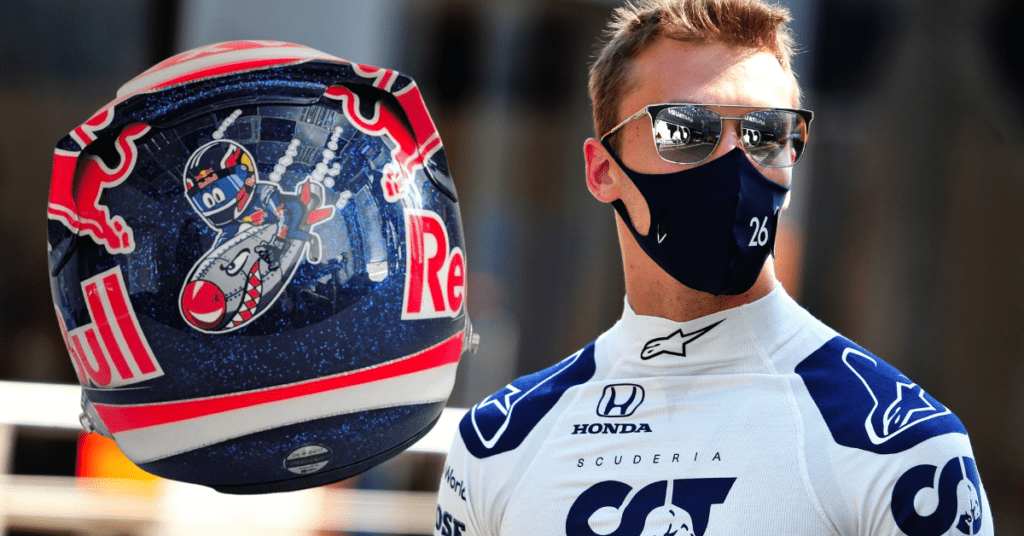