Although the 2020 Macau Grand Prix was heavily disrupted due to the ongoing coronavirus pandemic, parts of the weekend were still able to go ahead. In true Macau style, it was a crazy crash-fest and provided us with some of the wackiest racing of the year.

Because of the required 14-day quarantine, many championships and series did not run as scheduled over the weekend. It was confirmed at the start of November that popular events such as the Macau Motorcycle Grand Prix had been cancelled and most of those competing would be from Macau, Mainland China and Hong Kong.

One of the biggest dramas from the weekend was a crash that involved with Ma Qing Hua and Rob Huff.

Huff hit the back of Ma, resulting in Ma flying into the barrier just after the high-speed Mandarin corner. Fortunately, Ma wasn’t hurt in the huge impact but it was certainly a terrifying crash.

The safety car was brought out immediately and the session was halted for 40 minutes whilst the barrier was repaired. Huff went on to win the  TCR China Series race but was handed a post-race penalty and stripped of his win at Macau.

After the necessary repairs were carried out, a similar accident occurred just laps later when Yang Xi and Wu Yifan made contact. The damaged car headed directly into the field, causing even more debris to be scattered across the race track.

An unusual occurrence even happened during one of the races, when a driver’s steering wheel came straight off. He remained very calm in what can only be described as a ‘code brown’ scenario.

Not sure this is how DAS works? @MercedesAMGF1 🤔 pic.twitter.com/p6kNt984La

The Macanese driver Charles Leong Hon Chio took the victory, with fellow countrymen Andy Chang Wing Chung finishing in second-place which made history at the Grand Prix. Leong becomes the second driver from Macau to win the famous race.

When you see all the accidents over the two-day weekend it makes you appreciate that nobody was seriously harmed, however, Macau being such a narrow and tight street circuit always produces such chaotic races.

You can see a full reel of all the biggest crashes and fails here too. 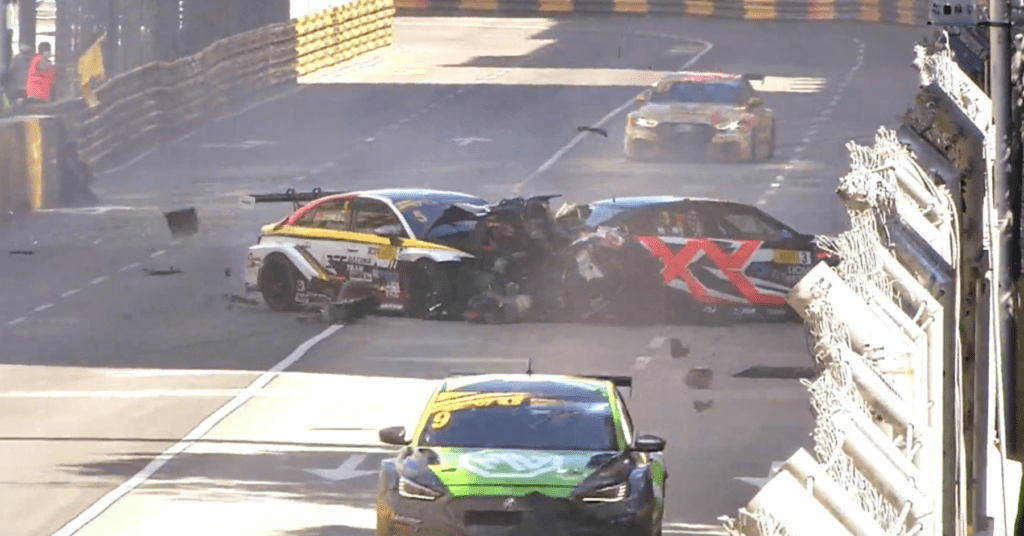