Spanning from 1988 to 2010, Codemasters’ F1 2017 features 12 different cars from five different teams. It’s the first time classic cars have featured in an official F1 game since the 2013 edition and needless to say, we’re pretty excited. Here’s a rundown of the old school cars you’ll be able to drive when the game comes out for PS4, Xbox One and PC on 25 August.

The combination of a Gordon Murray-designed chassis, an effective Honda turbo engine (no, really) and the best two drivers in the sport helped the MP4/4 to win 15 out of 16 races in 1988. Ayrton Senna won his first World Championship despite teammate Alain Prost actually scoring more points – but thanks to the dropped scores system that was in place it was Senna who came out on top.

(Initially this car is only available if you pre-order the game, but it will be available to buy separately at a later date).

Senna won his third and final championship in 1991 driving a McLaren MP4/6, powered by a sonorous Honda V12 engine. With Gerhard Berger in the other car the team also won the Constructors’ Championship.

One of the most technologically advanced F1 cars of all time thanks to its active suspension system, the Williams FW14B allowed Nigel Mansell to finally secure a World Championship and marked the beginning of Williams’ dominance of much of the 1990s.

Of all the classic cars featured in F1 2017, the Ferrari 412T2 is the least successful. It only won a single Grand Prix in Canada – the sole victory of Jean Alesi’s career – but with Alesi and Berger in the driving seat and F1s last ever V12 in the engine bay it’s become just as iconic as any title-winning car.

Damon Hill finally got it together in 1996 and won the World Championship driving the FW18, though rookie teammate Jacques Villeneuve pushed him harder than he would have liked. Will you enjoy driving this car, or will you have to stop because you’ve got a lump in your throat?

Rule changes for 1998 saw cars made narrower and grooved tyres introduced, and Adrian Newey got the rule changes bang on with the MP4-13. The car was dominant in the early part of the season as Mika Hakkinen and David Coulthard looked untouchable. Michael Schumacher and Ferrari clawed some of the advantage back, but in the end it was Hakkinen who came out on top to win his first championship. Incredibly, this is the last McLaren to have won the Contstructors’ Championship.

This is the car Michael Schumacher won a record-equalling fifth championship with in 2002. Once it was introduced at the third round in Brazil the car only failed to win at Monaco. Schumacher never finished lower than second with the car and he wrapped up the championship in France, with seven races still to go, whilst Rubens Barrichello finished second in the title race with four wins.

In fact the F2002 was so good that Ferrari continued to use it in the early part of 2003, with Schumacher able to win the San Marino Grand Prix.

The Ferrari F2004 was so utterly dominant that Schumacher won 12 of the first 13 races of the 2004 season en route to his seventh and final championship. Ferrari also won it’s sixth consecutive Constructors’ title with the car. Let’s hope it’s more fun to drive it in the game than it was to watch it at the time!

Fernando Alonso took his second and most recent championship (sorry, but saying that sounds so weird!) with the R26 in 2006 after a fierce duel with Schumacher’s Ferrari. The car was built around the ‘mass damper’ system, and once it was controversially banned mid season the cars’ competitiveness faded. But between Alonso (seven wins) and teammate Giancarlo Fisichella (one win) it was still good enough for Renault to secure a second consecutive Constructors’ championship.

In 2007 Ferrari’s Kimi Raikkonen was able to win six races and the championship in an incredibly closely-fought season with McLaren drivers Fernando Alonso and a rookie Lewis Hamilton. Raikkonen pipped the troubled McLaren drivers by a single point, and with Felipe Massa in the other car winning three races Ferrari won the Constructors’ as well.

It’s a pity Timo Glock’s Toyota isn’t one of the classic cars, because then we could all recreate the famous move on the last corner of the last lap of the last race of the 2008 season which ensured Hamilton beat Massa to the title in his second year of F1.

It’s scary enough that cars from the 2000s are now being considered classics, but one from 2010? There’s no arguing the awesomeness of the RB6 though – the team won nine races and both championships, with Sebastian Vettel winning a thrilling four-way title decider to become the youngest ever champion and kicking off four straight years of Red Bull dominance. 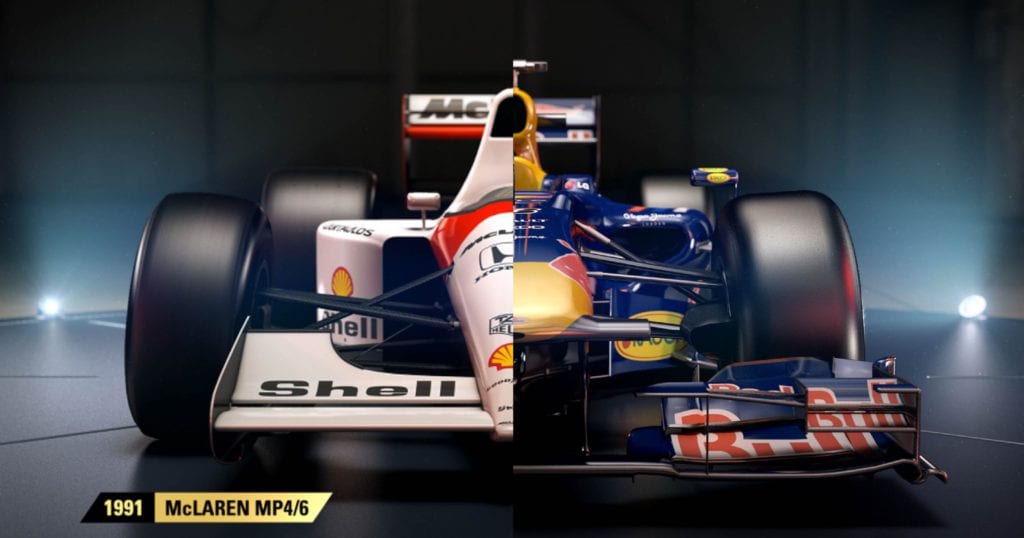