In the 87 runnings to date of the 24 Hours of Le Mans, only three have taken place in a month other than June. The very first race in 1923 was held on the last weekend of May, and in 1956 circuit modifications delayed the race to the last weekend of July. None have taken place so far away from the traditional date than in 1968, however, when the race was pretty much held in Autumn, on the 28-29 September.

In May 1968, a series of anti-capitalist protests by students led to widespread strikes across France. With more than 20 per cent of the French population involved, the economy was brought to a grinding halt. Even though the situation had died down towards the end of May, the police were still dealing with the threat of rioting and there was no way the country could host a major international event. There was only one thing to do: Le Mans (as well as other events scheduled for June) had to be postponed.

A new date was set for the end of September, which seemed less than ideal. Being so late in the season, the race suffered from a lack of interest and the atmosphere would prove to be a little bit muted, but that was the least of the worries. The weather forecast suggested that the circuit was be plummeted into a thick, treacherous fog during the night, leading to some calls for the race to be cancelled altogether for safety reasons. And if people thought safety was an issue in 1960s motorsport, you know it was bad.

In terms of the actual race, new regulations for 1968 had prohibited the use of engines larger than five litres for the Sports class, rendering the big 7.0-litre Ford GT40s obsolete. A 3.0-litre limit was also imposed on the prototype class to match the Formula 1 engine regulations of the time and reduce costs. This meant that Ferrari no longer had a prototype that complied with regulations and although they had an F1 engine to theoretically drop into a car, Enzo refused to compete on principle. 1968 also saw a minor track change as the Ford Chicane was introduced at the end of the lap, dramatically reducing speeds going past the pit lane and improving safety.

Despite the regulation changes, the GT40s (now running the smaller 4.9-litre engine) were still favourites to win the race. However, with the race being so much later in the year, the development of the prototypes had advanced sufficiently to give the John Wyer-run GT40s a run for their money, and in qualifying Porsche locked out the first three places on the grid with the new 908 coupe.

With the race being held so late in the year it meant that more of the race would be spent in darkness, so to compensate the race start took place an hour earlier than usual. It was also decided that teams would be allowed to make a battery change if needed, due to the extra strain of running with their lights ablaze for so long.

At the start, the Porsches took off into the lead. But as you know, Le Mans is about more than simply having the fastest car and – after nine hours, two of the four 908s had retired with mechanical issues, another had been disqualified, and the car that had been leading lost time with electrical issues. It was all very unusual for a team which was already known for its reliability and preparedness.

At this point, the John Wyer Ford GT40 driven by Pedro Rodriguez and Lucien Bianchi took the lead and was never seriously challenged for the rest of the race. The dreaded overnight fog thankfully did not materialise, but many runners suffered in an extended period of heavy rain. Henri Pescarolo made himself a French hero overnight, driving his unfancied Matra through the rain with a failing windscreen wiper up to second place before sadly retiring with a puncture and a fire just a few hours from the end.

At three o’clock on Sunday, the Rodriguez/Bianchi GT40 crossed the line to win by five laps from an older Porsche 907 and the sole remaining 908. As well as securing the manufacturers’ championship for Ford, the race also turned the Gulf-liveried GT40 into one of the most iconic racing cars of all-time. 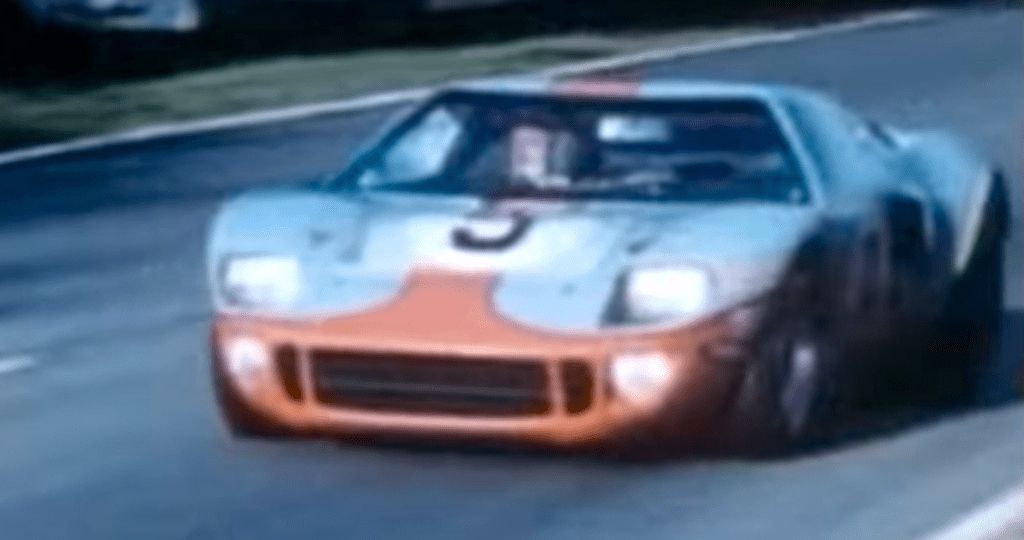