Here’s What Some Obscure Former F1 Drivers Did After F1 – WTF1
Skip to content
×
Formula 1 , Retro

Here’s What Some Obscure Former F1 Drivers Did After F1

With such a wide variety of series within the motorsport world, it’s easy for even the most obscure F1 drivers to stay on the racing scene.

But some take very different routes and ditch racing altogether. It’s always interesting to see what some of the less successful F1 drivers get up to once they leave the sport.

So, we’ve done some digging to see what some of them did and have been up to.

You can’t talk about obscure mid-2000s F1 drivers without coming across Baumgartner. He was decidedly average in Formula 3000 before making a surprise outing at his home race, the Hungarian GP, for Jordan in 2003 to replace Ralph Firman.

Woefully slow in qualifying, he retired in the race but then moved to Minardi for a full and unspectacular season in 2004. He hasn’t raced much since, according to our research, although he did some Champ Car and Superleague Formula testing.

Baumgartner popped back up at the 2017 Spanish GP as one of the drivers of the Minardi two-seater F1 car, as part of Liberty Media’s new ‘F1 Experiences’. He shared driving duties with 2005 Minardi driver, the similarly-obscure Patrick Friesacher.

While one 2004 Minardi F1 driver hasn’t been up to much racing since, the other has forged a successful career in GT racing. Bruni went to GP2 in 2005 and 2006, winning a few races, but his main focus since leaving F1 has been in endurance events.

The Italian has raced at Le Mans every year since 2007, winning the GT class (GT2 and then GTE Pro) three times. He’s won the FIA WEC GTE Pro title twice, FIA GT2 crown once alongside various other successes in GT and endurance racing (which he’s keen to list in his Twitter bio).

Bruni’s raced in championships across the world, from the American Le Mans Series to Super GT, FIA WEC and GT Asia. In recent years, he’s formed a great partnership with the AF Corse team, but from 2017 he switches from Ferrari to Porsche as a factory driver.

Yep, the guy who lost his Jordan F1 drive in 1991 after a prison sentence and started the career of the legendary Michael Schumacher now runs a company F1 fans will probably be familiar with.

Gachot got given a two-month prison sentence for spraying CS gas in a London taxi driver’s face, after a traffic altercation. He was mid-way through his third F1 season, and the first with an actually decent car (the stunning Jordan 191). After prison, he did return to F1 for a few years with Larrousse and Pacific.

Afterwards, he raced a few times at Le Mans and did occasional GT races, but he has mainly focused on Hype Energy – the drinks manufacturer that now sponsors Force India in F1. He’s been head of the company since 2000.

The Brazilian driver did a part-season with Jaguar in 2003 before being ditched, and was then a test driver at Williams – he raced for the team nine times as super-sub, with mixed results.

After his last F1 start in 2005, he competed in a variety of series, such as Superleague Formula (remember that?), AutoGP and even made a few FIA WEC starts. Randomly, he also competed in GP2 for a few races at the beginning of 2007 too.

But, his main focus has been on Brazilian Stock Cars, he’s been racing in the ultra-competitive national tin-top series since 2007 and has won a few races – and caused a few incidents too (video above). Off track, he’s got really into triathlons, for anyone interested.

Arundell passed away in 2009, after an unusual career change following his time in F1. He raced in the sport sporadically from 1963 to 1966 for Lotus and scored two podiums. The British driver did a little bit of saloon car racing but retired from it altogether in 1969, moving to the USA.

He then switched to the pornographic video game industry. No, we’re not joking. He set up a software company called Mystique, which created adult video games in the early 1980s for Atari 2600 before going out of business. Quite different to F1…

Weirdly, the post-F1 career of Doornbos has a similar theme. He did a few F1 races for Minardi and Red Bull from 2005-2006 and then competed in Champ Car, Superleague Formula and IndyCar. However, now he’s entered the sex toy industry as the co-founder of a company called Kiiroo. In case you were wondering what he’s been up to.

Rosset showed some promise in junior categories, but never got a big break in F1 – with two awful seasons for Footwork and Tyrrell, sandwiched by that disastrous Mastercard Lola project in 1997. But after leaving F1, he decided to focus on the businesses that he’d been running during his career – including sportswear brand Track & Field.

Although he turned his back on racing after 1998, he returned in the Brazilian GT3 Championship 10 years later and has been racing in the Porsche GT3 Cup for quite a while now.

He may have raced in eight F1 seasons during a 10-year period, but Larini failed to really make an impact on the sport – although, it was pretty tough to do so driving for the likes of Coloni, Osella and Ligier. The Italian did make a few Ferrari appearances, finishing on the podium once, and made his last F1 appearance with Sauber at Monaco in 1997.

While his F1 career was pretty ‘meh’, he found his groove in touring car series – he raced in DTM (winning the ’93 title), the ITCC (runner-up in ’01), ETCC, WTCC and national categories too. So, he’s pretty much tried all of the touring car championships. Larini has also dabbled in GT and endurance racing too, so he’s certainly kept busy. 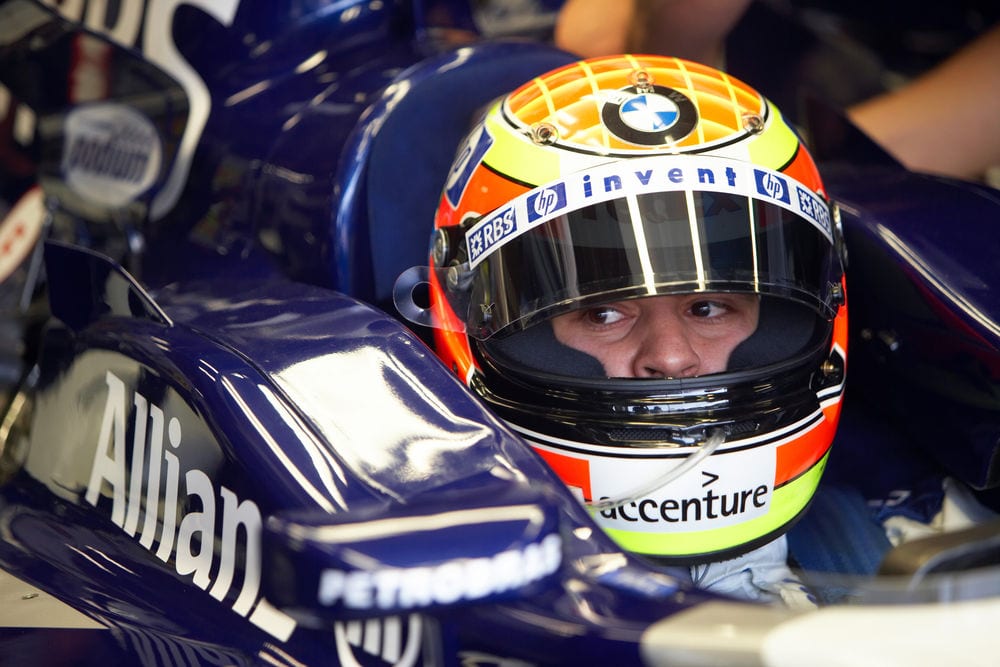