There’s less than a week until Netflix’s Drive To Survive Season 3 hits our screens. With so much F1 news to cover after a totally insane 2020, these are all the titles, official summaries and a brief explanation of what’s included in each episode of the upcoming season of Drive To Survive.

It goes without saying that if you want the show to be a total surprise, this probably isn’t the article for you. However, if you’re curious about what to expect and want to know if your favourite driver will be featured, read on.

Don’t worry we keep it all very brief so there are no major spoilers!

As the threat of COVID-19 looms at the Australian Grand Prix, one team’s new car design causes controversy.

This episode starts during pre-season testing with a large focus on the new look for Racing Point, or the Pink Mercedes as it was dubbed. We are introduced to new team owner billionaire Lawrence Stroll, who comes across as a figure you don’t want to mess with and almost like a super villain.

Everyone talks about their plans for the 2020 season, with particular emphasis on the competitiveness between Racing Point and McLaren that will bubble away all season.

We then arrive in Melbourne for the first race of the season. It’s super strange seeing people hugging, shaking hands and in such close proximity to each other, however over the weekend you can see it become quite a serious threat to the paddock.

The episode ends with the cancellation of the Australian Grand Prix and big uncertainty as to what the season will look like.

Episode 2: Back On Track

The drivers head to Austria for their first race in more than 200 days. Meanwhile, the Red Bull and Mercedes rivalry heats up, on and off the track.

The usual sit-down interviews are now occurring on Zoom as we enter a world with a global pandemic. Team factories are empty and deserted, but we soon get news that the season will start again in Austria.

Elsewhere in the episode, Christian Horner is still claiming ‘this is the year Red Bull are going to beat Mercedes’ or ‘this will be the closest year yet’ kinda thing. Red Bull seem to just protest everything in sight, from the DAS system on the Mercedes to providing extra footage of Hamilton not slowing for yellow flags, but it makes for juicy television.

Following the intense teammate battle at Mercedes, this episode is more centred on Bottas than Hamilton. It explores the mind games necessary to beat someone like Lewis, and discusses the rage and hurt that is caused when calling Bottas a “number two driver” or “Hamilton’s wingman”.

Oh, and there’s also a naked Bottas. Don’t say we didn’t warn you.

Episode 4: We Need To Talk About Ferrari

Welcome to the Italian Grand Prix, where Ferrari drivers Charles Leclerc and Sebastian Vettel try to put a much needed silver lining on their season.

First of all, I think this is my favourite episode name ever and I think it’s also up there with one of the best Drive To Survive episodes we’ve seen. Brace yourselves.

Sebastian is like a naughty kid, making jokes and consequently being told off by Ferrari as a result. He pretty much keeps throwing Ferrari under the bus as he knows his time with the team is limited and with the car in such a bad state. In short, GET THAT POPCORN AT THE READY.

Episode 5: The End Of The Affair

After Ricciardo announced he was jumping ship from Renault to McLaren, we see what a kick in the balls the move was to Cyril Abiteboul. Things get pretty awkward between the two, in addition to Renault lodging protest against Racing Point. Spicy 🌶️

We then spend time at the British Grand Prix, following the on-track action between Renault, Racing Point and McLaren.

This might just be the best episode of the season. The story is told in true zero-to-hero style, with Gasly being very honest about his thoughts of being dropped from the Red Bull team last year. There is no holding back.

Whilst Pierre shines in his AlphaTauri, the guy that replaced him at Red Bull, Alex Albon, shows obvious signs of struggle. The episode explores the question, did Red Bull hire the wrong guy?

The episode also covers Pierre’s outstanding Monza win makes you feel all the emotions. You’ll laugh, you’ll cry and everything else in between.

As tradition would have it, Guenther Steiner appears in yet another season of Drive To Survive. You’ll be glad to know he is his usual sweary self and still has Gene Haas moaning at him on the telephone at every given opportunity.

A decision needs to be made about the future of the team and how money can be injected into Haas who are struggling financially. Ultimately, both their drivers Romain Grosjean and Kevin Magnussen are booted from their race seats to make way for new talent in 2021.

Haas and Alfa Romeo are portrayed as being big rivals on track, which does mean we get to see more of Kimi Raikkonen and Antonio Giovinazzi. We’re serious, Gio even gets to speak in this season!

With driver Carlos Sainz Jr. moving to Ferrari at the end of the season, McLaren puts its faith in his soon-to-be former teammate, Lando Norris.

We all loved the Lando and Carlos bromance at McLaren but this episode portrays things very differently.

Netflix looks at the ‘betrayal’ of Carlos leaving the McLaren team in favour of Ferrari, with the fun and jokes between the two drivers appearing to actually have a deeper and darker meaning. Interview moments are taken out of context and the whole episode gives off vibes that McLaren could even be sabotaging Carlos’ season.

The episode ends with Carlos and his close battle for victory in Monza, with those within McLaren questioning if he made the right decision to leave the team.

Over the course of two-drama filled races, drivers with uncertain futures vie to hold on to their seats. A horrifying crash shocks everyone.

This is the ‘Grosjean crash’ episode. We all knew it was coming. Clips from the Bahrain crash have been shown in the trailer, and will continue to be shown in the ‘coming soon’ clips at the end of episodes.

The 50 minute episode is longer than usual, and has been produced to clearly cause a reaction. We all experienced a rollercoaster of emotions when we saw the crash live, and Netflix have put together a series of clips to revoke those feelings again. It makes for tough viewing, I won’t lie to you.

Even though we know Romain is okay, it still causes your heart rate to fluctuate.

As well as speaking to Grosjean and his wife later in the episode, we also follow the story lines of Perez. From his engine failure at the end of the Bahrain Grand Prix, to his incredible victory just a week later in Sakhir.

Surprisingly though, there’s absolutely no mention of George Russell and his Mercedes outing. Sorry guys.

Episode 10: Down To The Wire

Racing Point challenges McLaren and Renault at the F1 season finale in Abu Dhabi. Hamilton opens up about being Black in F1.

This final episode follows the close battle for third in the constructors’ championship and nicely brings together all the drama McLaren, Racing Point and Renault have experienced throughout the season.

We also follow Ricciardo on his final race with Renault and look ahead to new adventures for a handful of drivers and teams on the 2021 grid including a glimpse of Aston Martin.

The series closes with Lewis Hamilton having a very open and honest discussion about his experience in motorsport being black, both as a young kid and now as someone with a voice and a platform. Big respect and a special note to end on.

Which episode are you most looking forward to seeing? 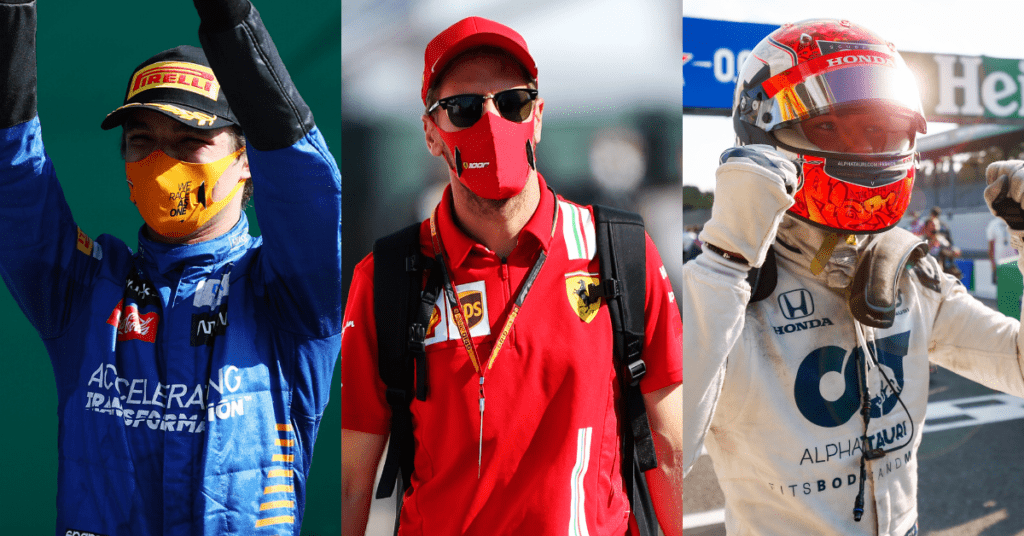