Endurance racing is a popular destination for a lot of drivers – largely because there are so many seats available and, usually, no matter the team or the car, chances are you’ll be competitive. Former F1 drivers are no exception (you could even say that F1 is a WEC feeder series…) but just because they have top-level single-seater experience doesn’t guarantee success, as you’ll discover.

Of course, the winners, Fernando Alonso (double F1 champion, raced for Minardi, Renault, McLaren and Ferrari… why am I telling you this!?), Sebastien Buemi (Toro Rosso 2009-11) and Kazuki Nakajima (Williams 2007-09) have all come from F1, whereas the second-placed No.7 car had just Kamui Kobayashi (Toyota, Sauber and Caterham) with F1 race experience.

Third overall was also rather heavy on the F1 experience. Former Renault driver Vitaly Petrov was joined in the No.11 SMP Racing car by Le Mans debutant Stoffel Vandoorne, making it two ex-McLaren drivers on the podium.

WE DID IT! After 24H of RACING we finished 3rd in Le Mans! What a crazy race! Thanks to everyone at SMP and my team mates @vitalypetrov @mikhailaleshin for the amazing job. I AM coming back! #LeMans pic.twitter.com/d4K6V5BeOc

The No.1 Rebellion finished fourth with Bruno Senna (HRT, Renault, Williams) and former one-off Caterham driver Andre Lotterer aboard. The No.22 United Autosports car finished ninth overall and fourth in LMP2, where previous Force India and Williams driver Paul di Resta could be found sharing a car with Filipe Albuquerque and Phil Hanson. Another ex-Toro Rosso driver in Jean-Eric Vergne could be found in 11th overall, driving the No.26 G-Drive car. Former Manor and Caterham legend Will Stevens finished 13th overall as part of the No.23 Panis-Barthez squad, but you have to go a long way down the order to find the next F1 name.

Second in GTE-Pro and 21st overall came the No.91 Porsche driven by 2004 Minardi driver Gianmaria Bruni. Two places further down and first of the retro-liveried Ford GTs was the No.68 car with local man and 2008-09 Toro Rosso driver Sebastien Bourdais on the team. The all-Dutch No.29 LMP2 crew with former Caterham driver Giedo van der Garde on the team finished 27th, while Jan Magnussen’s 21st consecutive Le Mans ended with ninth in class, 29th overall.

Drop down the order a bit more to some of the GTE-Am cars and you find the last two ex-F1 drivers to have finished the race. Olivier Beretta drove in F1 for Larrousse in 1994 and has competed in every single Le Mans since 1995 and ended up 10th in class (43rd overall) in the No.70 Ferrari, while Giancarlo Fisichella was two places lower in the No.54 Spirit of Race Ferrari.

Of the 12 cars that weren’t classified as finishers, three of them featured ex-F1 drivers. The No.98 old-spec Aston Martin Vantage retired in its final race, denying mid-90s Lotus and Minardi driver Pedro Lamy the chance at a second class win at Le Mans.

The No.17 SMP Racing car was running a strong third overall when Egor Orudzhev heavily crashed out at night – he wasn’t a former F1 driver, but teammates Stephane Sarrazin and Le Mans rookie Sergey Sirotkin certainly were!

The #17 @SMP_Racing in a huge spin at the Karting Corner.
🌙The night is proving to be very cruel.#LeMans24 pic.twitter.com/IhgXQlzU4J

Finally, there’s Lord Pastor Maldonado. He capped his successful maiden season of endurance racing by sticking the No.31 DragonSpeed Oreca in the wall at Tertre Rouge on Sunday morning.

So aside from in LMP1 where six of the nine drivers on the podium were former F1 drivers, it wasn’t the best Le Mans for the ex-F1 chaps this year. Better luck in 2020… 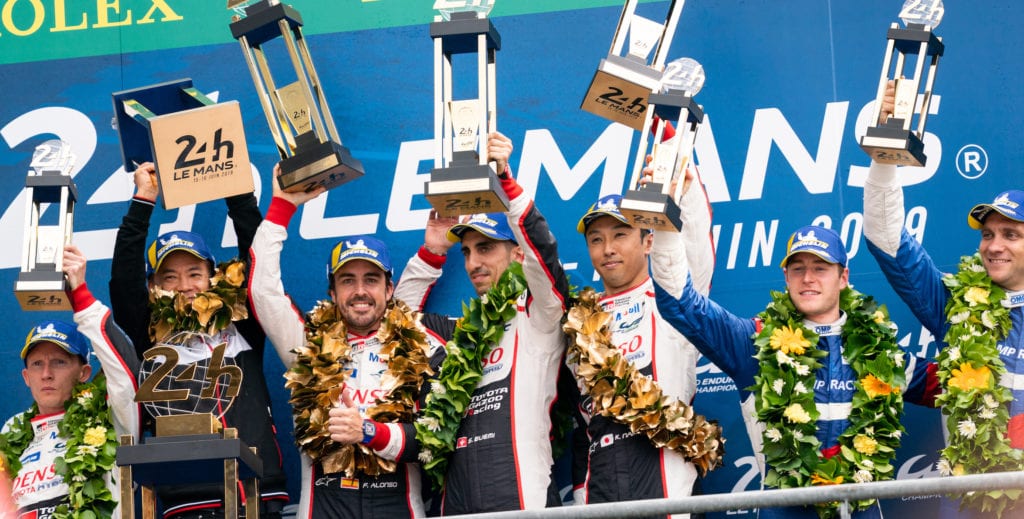