Honda Made A Cheeky Reference To Alonso After Verstappen Won The German GP – WTF1
Skip to content
×
Formula 1 , Fun

Suzuka, Japan, 2015. Coming towards the end of a difficult first season back together in F1, the Honda-powered McLaren of Alonso was passed by Marcus Ericsson’s Sauber. Fernando took the opportunity of it being Honda’s home race to make a point of his dissatisfaction and said over team radio “it feels like GP2”. Later, he was passed by Max Verstappen’s Toro Rosso, at which point he let out an impassioned – and infamous – yell of “GP2 engine! GP2 engine! Argh!”

Fast-forward to 2019, and Honda is no longer with McLaren. Alonso is no longer an F1 driver, and Honda power units are now fitted to the Red Bull and the Toro Rosso. The Japanese manufacturer won its first race of the hybrid era with Verstappen in Austria and has now added a second in Germany – and as a bonus, Daniil Kvyat put a Toro Rosso on the podium, too. How does Honda react? With this superb – and slightly surprising – tweet, complete with an ‘accidental’ typo.

Now that’s some top quality social media-ing. It’s impressive, too – not just because of the improvement in performance over the years, but because the Honda power units have – so far – also been rather reliable. Red Bull-Honda is looking like a genuinely threatening combination, whereas the only thing McLaren-Honda threatened was a monopoly on meme material.

It’s not the first time an F1 team/manufacturer has poked a bit of fun of how things went down with McLaren, either. When Toro Rosso took over the Honda supply last year, the team put out a fake FAQ and a tweet, also with an ‘accidental’ typo. 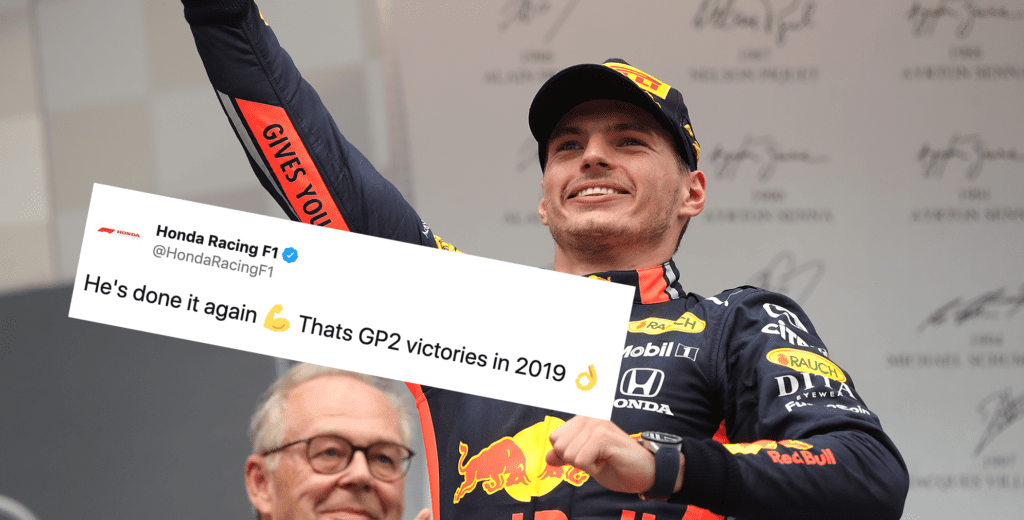