How Did The Ex-Formula 1 Drivers Fare In The Super GT/DTM Dream Race? – WTF1
Skip to content
×
Formula 1 , Touring Cars

How Did The Ex-Formula 1 Drivers Fare In The Super GT/DTM Dream Race?

Some drivers, such as Button’s team-mate Naoki Yamamoto and two-time DTM champion Marco Wittmann, will be overlooked for this recap despite holding experience in F1 machinery; we’re only interested in the men who have taken the start of a Grand Prix at some point in their career.

BMW drafted in home hero Kobayashi for his first outing in a DTM car, making the announcement early in October. The Japanese driver’s weekend got off to a fairly pedestrian start, finishing 16th in both the pre-weekend test session and a wet Friday practice session. The ex-Toyota, Sauber and Caterham cult hero then dropped to 18th place in a tricky-to-judge qualifying session for Race 1. There was a positive to take from the first race, however, as Kobayashi – now plying his trade in the World Endurance Championship and Super Formula – was the highest-placed BMW driver in 14th and steered clear of any glaring errors.

In typical fashion for the 33-year-old, a wild Sunday allowed him to enjoy greater success. His qualifying pace still proved to be a sticking point, but a sterling drive among the total carnage of Race 2 ensured a brilliant fifth place finish from 13th on the grid. Only this time, Wittmann’s second place denied him of holding the accolade of ‘best BMW’ for the second day running.

Nakajima, like Kobayashi, is also a regular fixture in the Toyota LMP1 programme, just in the other car. But the former Williams driver is a full-time driver in Super GT with Lexus’s Team Au Toms squad and finished seventh with one win at Suzuka in the 2019 championship.

He started the week in decent form – finishing the second test session in sixth place, half a second off the ultimate pace – and showed decent pace in practice, but lined up in a disappointing 17th place for Race 1. He fared little better on Saturday afternoon, finishing as the lowest Lexus in 16th place. Nakajima stood a good chance for a top 10 finish in Race 2, but a collision with Lexus stablemate Hiroaki Ishiura and Nissan duo Kohei Hirate and James Rossiter moments after the second safety car restart at Turn 10 forced him into retirement.

All-round icon Zanardi is no stranger to BMW’s M4 DTM, and the necessary control adaptations, if a little out of practice. He surprised BMW by finishing in the top five in his last guest appearance in the series at Misano in 2018; however, there was to be no repeat at Fuji this year. The Italian – who drove for Jordan, Minardi, Lotus and Williams at opposite ends of the 1990s – languished towards the back of the field for most of weekend, and retired with engine issues midway through Race 1.

A cameo at the front with Audi guest Benoit Treluyer in Race 2 was a pleasant surprise, but the pair managed to elevate themselves to great heights by pitting under the first safety car and had to serve their mandatory pitstop in normal race circumstances. He salvaged 13th place at the end of Sunday’s action.

For the first time in six years, it happened. Narain Karthikeyan won a major race. And, despite the confusion of Race 2, it was won on merit. Three safety car periods threatened to knock Karthikeyan out of his groove, but he stayed resolute. The Indian took over the Nakajima Racing NSX GT500 from Honda junior and ex-Formula 2 racer Tadasuke Makino and planted his car in the top three in qualifying. He was then promoted to second by virtue of a five-place grid penalty for fastest man Daisuke Nakajima, behind new poleman Loic Duval and his trusty Audi.

The Jordan and HRT…shuffles note cards… star, Karthikeyan, couldn’t make it past the 2010 Super GT champion on the first lap, but used the supreme power of the NSX to good advantage moments later to take the lead. And, other than his pitstop, he never relinquished it; staying as cool as a cucumber to rocket away from Wittmann and Duval at the final restart.

Needless to say, he had the last laugh.

I’m sad to report that it was a very quiet Sunday drive for Kovalainen, the Super GT champion of 2016. The Finn finished 14th on Sunday, and Lexus team-mate Yuichi Nakayama couldn’t produce a result on Saturday either. Qualifying was also a damp squib with 16th place, 1.433s away from pole.

It would have been interesting to see what Button could have done, particularly in the stop-start Race 2, if he wasn’t so busy being stranded in the desert. Alas, he’s leaving Super GT – but at least he graced the merger at Hockenheim last month. 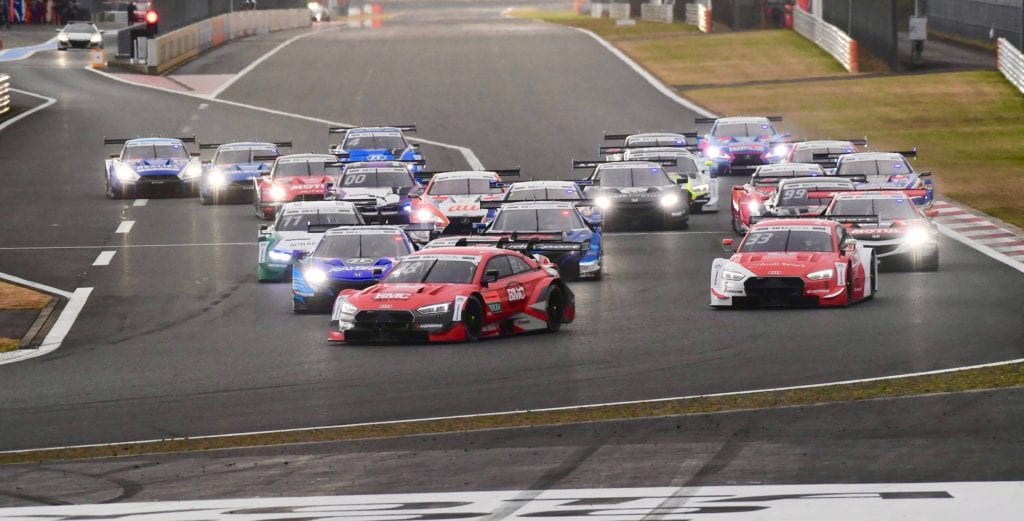