Its Q3 on a sunny July day at the Hungaroring in 2007 and the needle between Alonso and Lewis Hamilton is about to reach boiling point. First, Hamilton ignores a team order to allow Alonso ahead during the fuel burning phase of the session. As recompense, Alonso then sits in the pit box after changing tyres for just the right amount of time to allow him to complete a lap, but deny his teammate the opportunity.

Ron Dennis blows up. Rumours fly around of Hamilton telling Dennis to “go fucking swivel” whilst Alonso blackmails him, demanding preferential treatment in exchange for keeping quiet about what would become ‘spygate’.

From then on, Alonso’s career was set on a path that meant that despite his driving talent, two championships would be his lot. But what if things went the other way? Suspend your disbelief for a moment and indulge in a bit of fantasy, because here’s how Fernando’s F1 career might have panned out in an alternate timeline.

It’s Hungary 2007. The same qualifying scenario plays out but this time, Alonso keeps his emotions in check. Whilst Hamilton is effing and blinding at the team boss, Alonso keeps quiet and is apologetic for his actions. With the team now a little bit put out by Hamilton’s attitude and wondering if he has the mental strength to challenge for the championship, subconsciously they gravitate towards Fernando. And Fernando, now feeling like the number one driver he expected to be, raises his game accordingly. He splits the Ferraris to finish second in Turkey, and manages to win in China whilst his teammate is beached in the pit entry. Alonso wins his third championship, four points ahead of Hamilton and seven ahead of Kimi Raikkonen.

Over the off-season, spygate comes to light and McLaren is stripped of its constructors’ points. The drivers’ championship stays as is, but this time Alonso has nothing to do with the whole affair. As a result of that and feeling more at home in the team, he sees out the rest of his contract, which runs until the end of 2009.

With Hamilton and Felipe Massa making many mistakes in 2008, Alonso is able to waltz comfortably to his fourth championship. From mid-season onwards, he never finishes off the podium and wraps up the title with two races to spare.

Despite Alonso’s dominance, however, Hamilton is often faster in qualifying. He’s now settled down from that fiery rookie season and, with a little more polish, it’s looking like he could be a serious challenger. With one year still to run on his McLaren contract, Fernando starts looking elsewhere.

2009 is a disaster. McLaren completely miss the boat with the new regulations and with both drivers struggling to score in the first half of the season, Fernando’s mind is made up – during the European Grand Prix weekend in Valencia, it’s announced that he’ll join Ferrari for the 2010 season. Alonso goes on to win in Valencia and in the season-finale at Abu Dhabi, but he finishes behind Hamilton in the 2009 championship.

2010 plays out in the same way as it actually did – except, that is, for the championship decider in Abu Dhabi. Fernando, no longer weighed down by the burden of the 2007 season, crashgate and the potential missed championships, keeps a cool head. Instead of pitting to cover off Mark Webber, Fernando makes the call to stay out for longer and goes with a similar strategy to that of Hamilton and Sebastian Vettel. The prevents him from getting stuck behind Vitaly Petrov’s Renault and although he only finishes fourth, it’s enough to win his fifth championship by two points.

2011 doesn’t go brilliantly as Ferrari fails to get a grip on the exhaust-blown diffuser, but things are better in the craziness of the 2012 season.

Hamilton, frustrated at both McLaren’s inability to deliver a championship-winning car and the way Jenson Button seems to have galvanised the team around him, makes a huge mistake at the first race in Australia. Having seen Button take the lead at the start and then slipped behind Vettel during the pit stops, he rashly tries to pass Vettel into the first corner but makes contact, taking the pair of them out of the race. That promotes Webber to second and Alonso to third.

The rest of the season goes identically to real life, but the impact of that first race makes all the difference. Instead of finishing three points behind Vettel, the points swing from Australia means that Alonso actually wins the his sixth championship title by the margin of 25 points.

2013 and 2014 pan out as normal. Vettel crushes everyone in 2013 to win his second championship, whilst Hamilton’s move to Mercedes works out perfectly to finally deliver him his first title in 2014. This time, however, Fernando is still happy and confident that Ferrari can turn things around, and the team still sees him as its best chance of future success. Alonso signs a two-year extension with the team, taking him through to the end of 2016.

Things immediately improve, and Fernando is a regular race winner throughout 2015. It’s not enough to beat Hamilton, but he does finish the season just a few points behind Nico Rosberg.

The team slips again in 2016. There are no wins for Alonso and he’s become increasingly demotivated by the dominance of Mercedes. He sees that the McLaren-Honda partnership is failing, Red Bull and Renault have yet to make any inroads into Mercedes’ advantage, and the midfield is slipping ever further from the top teams. With six championships to his name, an increasing interest in other motorsports and no desire to race in F1 without a chance of winning, Fernando announces his retirement during the summer break.

Then, Nico Rosberg drops a bombshell.

After winning the 2016 title, Rosberg’s shock retirement sends the driver market into a frenzy. However, with most 2017 contracts sorted out, finding a decent replacement is tough. There’s no shortage of people who want the seat, but Mercedes only want one man: Fernando Alonso.

It doesn’t take much coaxing to bring him out of retirement and he signs a two-year deal, but there’s a problem. During his short retirement, Fernando had signed up for an entire IndyCar season with Andretti Autosport. He manages to buy himself out of the commitment for the entire season, but sponsors are insisting he races at the Indy 500 and threaten to take court action if he doesn’t.

From the start, it means Alonso is fighting for the 2017 title with one arm behind his back. He has a solid season for Mercedes and comes close to winning the Indy 500, but Hamilton comfortably wins the championship in F1. Even if he hadn’t missed the Monaco GP, Alonso wouldn’t have been a contender as he doesn’t even beat Vettel to second in the standings.

Hamilton’s thrashing of Alonso led some to wonder if Fernando had lost his mojo and that he was just driving for the paycheck. He insists it was the lack of preparation that explains the gap to his teammate, but it falls on deaf ears – especially when Alonso signs to drive for Toyota in the WEC.

Fernando hits the ground running in 2018. Despite losing out to Vettel in the first race he goes on to win the next four races on the trot before going off and winning Le Mans. Further wins at Silverstone, Hockenheim, and the Hungaroring give him a massive championship lead heading into the summer break, during which time he announces his retirement (again).

Although he only wins once more during the season (at Monza), Hamilton and Vettel are too busy taking points off of each other to close the gap. It’s more than enough for Alonso to clinch a record-equalling seventh championship with a race to spare, before heading off to compete in IndyCar in 2019.

OK, so it’s incredibly far-fetched (especially towards the end), but it’s not hard to see how Alonso could be ending his career with at least another couple of championships and an extra 20 or so wins. After all, another eight points scored across 2007, 2010, and 2012 would have made him a five-time champion.

Are his poor career choices his own fault? Well, partly, yes. But if after he won the championship in 2006 you were told he’d never win another one, despite driving for Ferrari and McLaren in 10 of the next 12 seasons, would you have believed it?

Whoever you blame for his lack of success, it’s a massive shame that one of the sport’s best drivers has spent so long unable to figure in any championship battles to the point where he’s had enough, even though he’s still driving superbly. Still, if he goes to IndyCar we’ll almost certainly get to see him fighting at the front again, and that’s definitely something to get excited about. 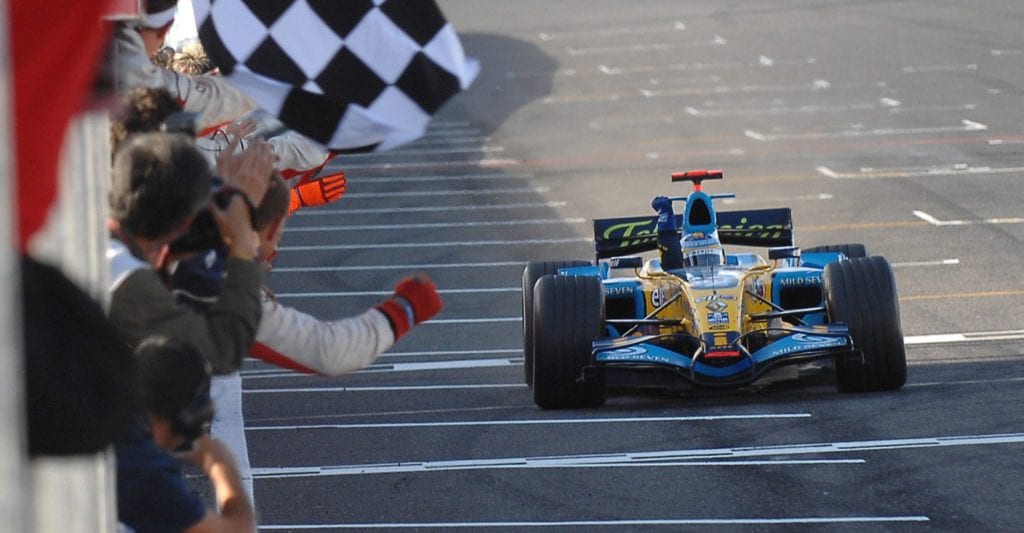