Here’s Every Penalty Point F1 Drivers Have Going Into 2021

Penalty points are handed to drivers if they do something that the FIA consider to be dangerous. This could be causing a collision, ignoring yellow flags, or even driving too fast under the safety car.

When a driver receives a penalty point, they remain on their licence for a year before expiring. However, there is big trouble is you total up to twelve of these points over the space of twelve months. Simply put, you earn yourself a race ban.

Nobody has ever got themselves to that point since the system was introduced in 2014, but some drivers have come close. Daniil Kvyat is the driver who’s been the most at risk of being awarded the race ban after being handed ten points in the space of a year in 2017.

But, how do the drivers look heading into the 2021 season? Who has the most points, and who has been on their best behaviour?

Surprisingly, reigning world champion Lewis Hamilton is one of two drivers on the grid with the most penalty points to his name at this moment in time. The seven-time champ has a total of six points, but this total could have been even higher.

Fortunately for Hamilton, these points from the race at Sochi and two points that F1 handed to him during the 2019 Brazilian Grand Prix for causing a collision have not followed him into the 2021 season, and he starts the year with six penalty points.

Valtteri Bottas did not score a single penalty point in 2020, or the year prior. A* student, Valtteri.

Despite the fact Max Verstappen has been the driver with the most penalty points amassed over a season, twice in 2015 and 2018, he will go into 2021 with not a single point on his licence. Impressive stuff.

His new teammate Sergio Perez starts the 2021 season with two penalty points. As well as being handed these points, Checo was also given two reprimands for separate incidents during the Portuguese Grand Prix weekend. These reprimands had no impact on his penalty points, but if he earnt another during the 2020 season, Perez would have been handed a 10-place grid penalty.

Alexander Albon, who was dropped from his Red Bull Racing seat at the end of 2020, ended the year with seven penalty points, the most of any driver on the grid.

Lando Norris might have started 2020 without a single point on his licence, but in 2021 things are different. Norris arrives at the first race in Bahrain with five penalty points he obtained over two different races last season.

For McLaren’s new signing, Daniel Ricciardo, he’s achieved the opposite. He started the 2020 season with seven points to his name, and this year only has one point when the season begins.

Sebastian Vettel was on his very best behaviour in 2020, not being handed a single penalty point. We sound so surprised because only the year before, Vettel totalled up a total of seven points – tied with Ricciardo that year for most points that season.

The same can’t be said about Stroll, who starts 2021 with three penalty points.

As will soon become clear, drivers that are new to the sport, or been absent from it, like in Alonso’s case, won’t have any points on their licence. These penalty points don’t transfer from championship to championship.

For Ocon, he was generally well-behaved throughout last season and starts 2021 with just one penalty point to his name.

Ferrari’s newest recruit, Carlos Sainz, also starts the 2021 season off positively with just a single penalty point on his licence.

Heading into the 2021 season, Leclerc has three penalty points.

Not only did Pierre Gasly take his first win in 2020, but he also completed the season in style and stayed out of trouble, receiving no penalty points. Gasly has only racked up five penalty points since starting his career in 2017.

As this will be Yuki’s first year in F1, he starts the season with no penalty points on his licence.

Antonio will start the new year with three penalty points, one less than his ‘Iceman’ teammate.

Kimi started the 2020 season with two points but collected more as the season progressed. He even managed to lose two penalty points from the previous year’s 2019 Russian Grand Prix, but then gained the two points back again weeks later thanks to causing a collision with George Russell at the 2020 Eifel Grand Prix.

F2 Champion Schumacher joins Haas as a rookie and has no penalty points on his licence.

At the end of the 2020 F2 season, Mazepin had attained eleven penalty points, just one shy of a race ban. In 2019, Mazepin also received a severe four penalty points plus a 15-place grid-drop for an accident in which he was “wholly at fault”.

George Russell is also on six penalty points as we approach the start of the 2021 season – equalled with Lewis Hamilton.

Russell was handed three penalty points during the 2020 British Grand Prix and 2020 Turkish Grand Prix for failing to respect double yellow flags at both respective races.

Russell’s teammate, Latifi, enters the 2021 season with a completely clean licence having being handed no penalty points in his debut season. Good work! 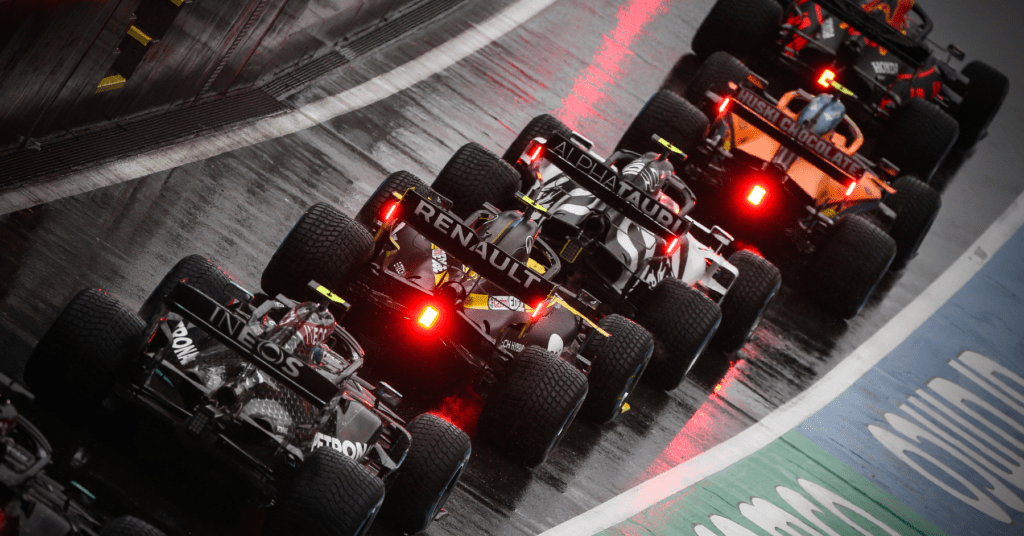