How Schumacher’s Statistics After Six Titles Compare With Hamilton’s

Of course, Schumacher went on to win another one and the figures he ended his career with are virtually ingrained into the mind of every F1 fan – 91 wins, 68 pole positions, seven titles. But we’re not interested in those. We’re only going to look at how Schumacher’s stats read at the moment he won his sixth world title at the 2003 Japanese Grand Prix, and compare to them to how Hamilton’s stats look right now – the moment he won his sixth title.

If you could classify any of Schumacher’s championships as his worst, 2003 would probably be it. Ferrari struggled for much of the season to the point where the consistency of Kimi Raikkonen and the speed of Juan Pablo Montoya and Williams almost denied the German the crown – until a controversial tyre ruling hurt the Michelin teams and bolstered the Bridgestone-shod Ferraris, but that’s a story for another day.

That season, Schumacher ‘only’ won six of 16 races and clinched the title with an awkward drive to eighth in the last race. That left him on 70 wins, whereas Hamilton currently has 83. The Brit also leads the way on pole positions as he currently sits at a staggering 87, whereas Schumacher ‘only’ had 56 at the time. Perhaps that shouldn’t be surprising, though – qualifying is a strong point of Hamilton, whereas it tended to be one of Schumacher’s weakest areas – if you can call it that!

So, Hamilton’s doing better then. Well… no. As with all statistics, context is also important. Yes, Hamilton currently leads the way in the majority of categories, but he’s started 248 grands prix. The moment Schumacher wrapped up championship number six, he’d only started 194. Seasons were much shorter in the bulk of Schumacher’s era, averaging around 16 races per year, whereas for most of Hamilton’s the figure has hovered around 20.

That changes things around in terms of percentages. Schumacher’s win rate was 36.1 per cent, compared to Hamilton’s 33.5 per cent. Schumacher also leads the way in podium rate (62.9 per cent compared to 60.5 per cent) and his laps led, averaging 20.5 laps in the lead per race compared to Hamilton’s average of 17.8. Hamilton does still head the charts in terms of his pole rate (35.1 per cent against Schumacher’s 28.4 per cent), but it makes things look a lot closer, doesn’t it?

There are some areas where the two are incredibly even. Both managed six championships in 13 seasons (well, 12 and a bit for Schumacher because he only did a few races in his debut year of 1991, but still 13 different seasons) and both were 34 years old when they achieved it. However, Schumacher ever so slightly younger – 34 years, 9 months and 9 days, whereas Hamilton was 34 years, 9 months and 27 days.

And in the seven years where they weren’t winning championships? Hamilton was runner-up in 2007 and 2016, but during the time between his first and second championship had a run of fourths and fifths. Meanwhile, Schumacher had two thirds in the championship and two seconds – though he was later thrown out of the 1997 standings following that contact with Jacques Villeneuve. His other results up until 2003 were 14th in 1991, fourth in 1993, and fifth in 1999, the year he missed six races with a broken leg.

So, as you might expect for statistically the two greatest drivers in F1 history, they stack up very closely. However, there is one key stat which confirms that Schumacher has categorically done the better job. That’s because in his 248 races, Hamilton has been beaten by Pastor Maldonado on three occasions. By the time he’d won his sixth title, Schumacher had impressively never been defeated by Lord Pastor.

We jest. And of course, stats don’t prove that one driver is better or worse than other and even without stats, comparing drivers from different eras is almost impossible. But in this case, it’s interesting that Hamilton and Schumacher are racking up their successes at a very similar rate. 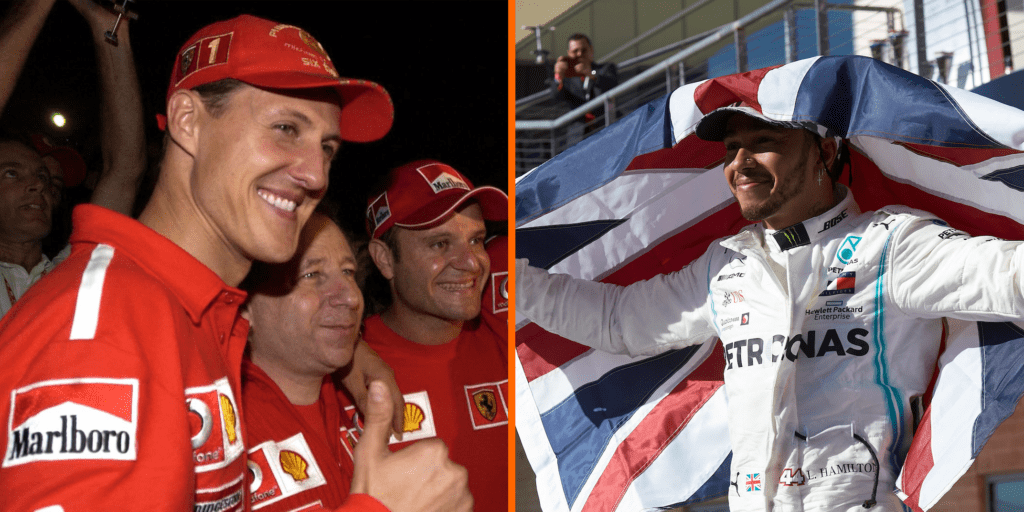