The modern Monaco Grand Prix is hailed as the gem on the F1 calendar; a venue which captures the prestige of Formula 1 and a location in which many F1 drivers end up calling home.

The track itself is an ultimate challenge of concentration for any driver that faces the street circuit, its place at the heart of Monaco escalates the speeds witnessed in modern F1, as cars cascade through the tunnel, navigate tight chicanes beneath onlookers in terraces. The winner also leaves as a conqueror of one of the most challenging circuits ever to be imagined.

But why was this track created in what can be seen as a logistical nightmare? Why did the organisers of the first Monaco Grand Prix in 1929 opt to create a circuit in close quarters during a time in which the automobile was evolving exponentially? Why, at a time in which the race for speed was open, would the tight, winding Circuit de Monte Carlo at the heart of Monaco be adopted?

The answer can be found within the history of the Automobile Club de Monaco. This title for the organisation was given in 1925 after the President of the Club, Alexandre Noghès, put forward a vote for all members. The organisation’s shift from being known as the “Monaco Cycling and Automobile Sporting Association” was significant.

The shadow of the First World War still loomed over most of Europe – if war had been the vehicle for humanity’s appetite for atrocity, a war of mechanical behemoths, craters of shrapnel and toxic fumes in melting lungs, it had also been the vehicle of engineering progress. The war had seen to it that for five years of conflict, the organisation wouldn’t be active at all and no events had been created in this timeframe. Alexandre Noghès emerged with perseverance in the wake of this and held the first ‘week of Automobiles’ event in 1921. The post-war landscape had seen a shift towards the automobile and the club’s name was duly amended. In 1925, the president said:

“Due to the ever-increasing size of the club, its name must be changed to Automobile Club de Monaco’. Cycling is becoming less common as a sport, whereas motorsport is on the rise.”

The early FIA rejected Noghès’ proposal, the reason being that whilst the Monaco club had organised automobile events often such as the Monte Carlo Rally, the fact that none of the events actually took place within Monaco itself rendered the application as obsolete.

Suddenly aware of the entry requirements, the President of the ACM started upon an ambitious project, to develop a grand street race that would be like no other, and would also guarantee the legitimacy of the Automobile Club. He gave this arduous task to his son, Anthony Noghès (yep, he’s the guy the final corner is named after), who was the General Commissioner at the time. He faced challenges on all fronts from funding the project to navigating the various logistical obstacles, be it steps, tram lines or cobblestone.

He entrusted Louis Chiron (winner of the 1931 race and the last Monegasque driver to score points in F1 until Charles Leclerc) with the sporting side of the task and gave the technical objectives to a man called Jacques Taffe. Their creation would eventually come to be – the track being situated within the tight streets of Monaco not only validated the ACM’s existence, but also established a race track and event that has stood the test of time.

A cynically-toned article published by Motorsport Magazine in 1971 denounce the track as an example of anti-safety, but also handily points out the various logistical headaches that had to be resolved in the circuit’s design. It reads:

“Perhaps it is all because it started in 1929 and that, apart from minor details, the circuit has remained unchanged since that day, even though Monte Carlo has been almost totally rebuilt over the years; many of the old hotels being replaced by sleek skyscrapers, the gasworks being removed completely, the station being moved to a new site, the trainlines being re-routed, an old train tunnel turned into a motor road, a new elevated road being made and yet the shape and character of the roads used for the circuit are unchanged. Where the racing cars blast along the harbour front, you are still not allowed to drive on non-race days and you are still not allowed to ride a motorcycle through the Casino square, while you must drive your car anti-clockwise round the square, whereas the racing cars circulate clockwise. One French paper summed it all up by asking whether the Grand Prix of Monaco had grown up with the town or whether the town had grown up with the Grand Prix circuit?”

The Monaco Grand Prix continues to edit itself to modern requirements. For 2018 the pit lane has been updated – 400 tons of steel, 21,000 hours of construction, 6.3km of electric cabling and 14 days of installation has seen the new, multi-floored pit buildings and garages arrive.

The venue and the circuit continue to stand out as unique and as F1 fans, the weekend is a special spectacle. But it’s origin story tells us how the forerunner of the FIA and the ambition of the ACM were the key catalysts in establishing the event. Had the early FIA been more lenient and accepted the club’s admission straight away, the incentive to hold a grand prix in the streets of Monaco may not have emerged. 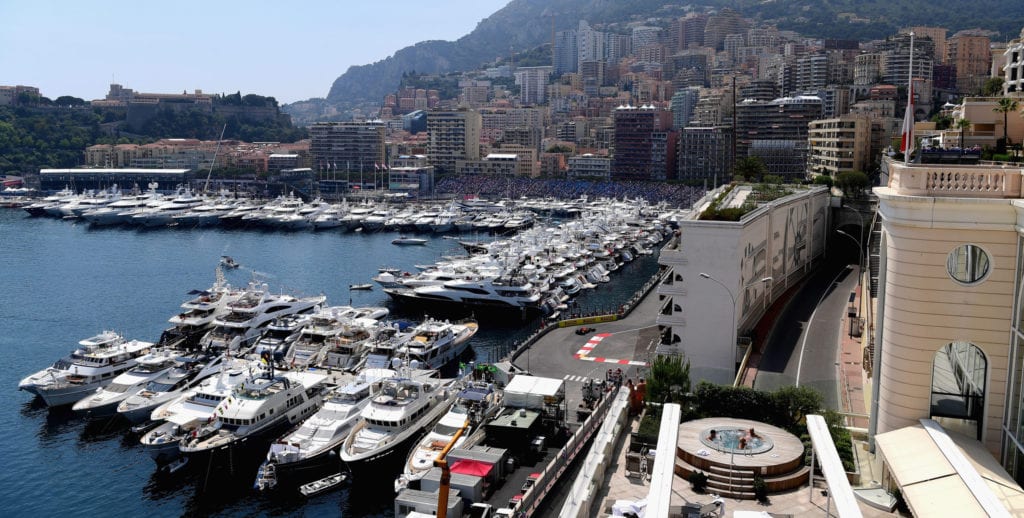