Here Is How Hulkenberg’s Crazy F1 Weekend Panned Out

Everyone’s favourite super substitute was back for the Eifel Grand Prix, but what exactly happened in those crazy few days? WTF1 breaks down the Hulk’s weekend.

Getting ready for a weekend of some German TV duties, Hulkenberg is probably chilling in some swanky hotel in Cologne and, like us, is getting annoyed that poor weather conditions have cancelled both FP1 and FP2.

Alexander Albon has had an inconclusive COVID-19 test result. If the re-test comes back positive, Marko asks Hulkenberg if he would be able to stand in. This is all starting to feel like déjà vu. Fortunately for Albon, his test comes back as negative and both Red Bull drivers can take part in the Eifel Grand Prix weekend.

It was a close call, almost a chance to compete in another home Grand Prix. At least Marko has Hulkenberg’s number though… all aboard the hype train!

The phone rings again. However, this time it is Otmar Szafnauer’s name that appears on the caller ID. The team boss and CEO of Racing Point explains that this time it’s Lance Stroll who is unwell and not able to take part in this weekend’s running. Apparently, if it’s not COVID that threatens the driver’s wellbeing and the chance to race, it’s a bad case of the shits.

This is Nico’s time. It’s 11 am though, and he is currently meeting a mate in Cologne for a coffee. It’s about an 80-minute drive to the circuit from where he is… oh and FP3 starts in an hour. Not a big deal.

Hulk jumps into his Porsche and zooms down the Autobahn and makes it to the track just in time. He is met by the F1 media who all want to hear from him, but there’s no time. There is also the need for a quick COVID test which all comes back negative. Next stop: qualifying.

He runs through the paddock, realises he doesn’t have the special pink helmet he had designed for Silverstone, so an old Renault helmet will have to do. He will just have to cover up the old sponsors with a piece of black tape; nobody will notice, right?

A quick change into his racing overalls and it’s time to get in the car. A twist of the steering wheel from left to right and then qualifying is given the green light and he leaves the garage for an out lap.

With several upgrades to the car since he last drove it in Silverstone, and having not raced the circuit since F1 visited it in 2013, there is a lot to take in and as a result, Hulkenberg qualified 20th. Last place. Gutted.

Even though he will start at the back of the grid, Nico is happy with his ten laps and is keen to just find his feet ahead of the race tomorrow.

The Incredible Hulk revealed before the race that he got no sleep ahead of the Eifel Grand Prix, spending his time in meetings and studying the steering wheel. Don’t worry though, he assured fans he was pumped up on lots of coffee and raring to go.

Lights out and it’s a great start for Hulk! He manages to make up positions on the first lap and continues to pull overtake after overtake as the race goes on.

After 60 laps of racing, Nico crosses the finish line in 8th place and was just two seconds away from the Ferrari of Charles Leclerc.

“Oh jeepers,” Hulk says when he finishes the race. “That was fun but very tough at the same time.”

If solid points weren’t enough, Hulkenberg’s day gets better as he’s awarded the ‘Driver of the Day’ by the fans.

“It has been a bit surreal, again, but also pretty cool. I am sure looking back at this with some time and after processing everything, it is going to be even cooler. F1 you rock, and see you around,” Hulk told fans on Instagram.

Now, about that Red Bull hype. Will this be the last time we see Nico Hulkenberg in an F1 car? Hmmm… *scratches chin* 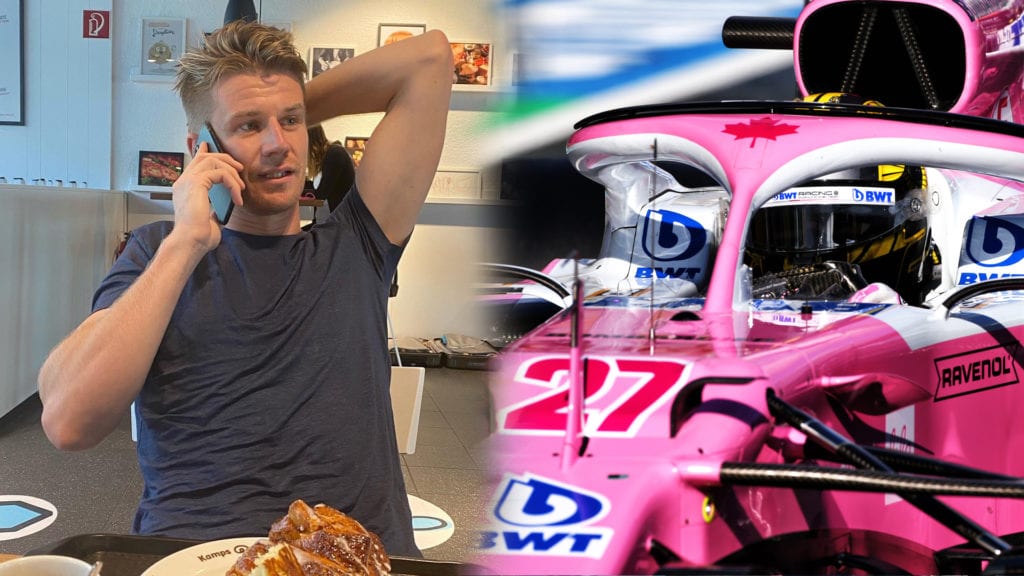