If you’re going to do a fantasy F1 livery, you might as well go all out and really focus on the ‘fantasy’ part – and that’s exactly what Daniel Crossman has done. We’ve featured his Star Wars designs on the site before, and now he’s gone and made some liveries based on the four houses of Hogwarts which will leave you wishing that the Triwizard Tournament featured some kind of Grand Prix.

But what if each house had to pair-up with an existing F1 team? Who would team up with who? Well, it might go something like this…

Surely the protagonists of F1 for the past couple of years are deserving of the Gryffindor sigil? The fact that its most successful wizard has recently performed some sort of Obliviate charm on his social media handles in no way disenchants the prospect of Hamilton and Bottas being the wizarding heroes to take on the dreaded Lord Vettelmort and Co.

Who could forget the Imperius curse that Vettelmort performed in Baku last season? Or the destruction of his final 2017 championship Horcrux at the start of the Singapore Grand Prix? It all points to Vettel being the Dark Lord. Names that hover around the garages such as Maurizio Arrivabene and Sergio Marchionne are positively reptilian, and without question contain essence of death eater. Then there’s Kimi. It is said that often, those that are the least suspecting are the most powerful among us.

Slytherin Ferrari’s signature spell: ExpelliBWOAHmus – Primarily used to threaten marshals into lifting blue flags and on one occasion, even used against the Ministry of FIAs very own Cornelius Whiting.

Sounds cool, looks cool and has two pretty cool wizards at the wheel but ultimately has the settle for third place. There are hopes that next season, this team will finally match its peers and bring glory back to this ancient house. Pesky gremlins infested the team last term and its head boy Adrian Newey is going to have to design a 2018-spec car that is much more resistant to the gremlins that caused so many retirements last season, although some blame has been laid at the door of Renault, who provided a weaker force of magic last season compared to its rivals.

Ravenclaw Red Bull Racing’s signature spell: Red Bull gives you Wingardium Leviosa – A spell that was effective last season on several occasions. It successfully levitates Ricciardo and Verstappen into podium positions when no pundit is really expecting it. The spell was even powerful enough on three occasions last season to elevate the Red Bull car to victory.

Without doubt a great house once upon a time, but when your history is at the forefront of your accolades, nothing can be really working well in the present.

This is the case for Hufflepuff Williams and its very young wizard Lance Stroll, who has shaken off the preconception that he was only on the grid because of a lofty Gringott’s bank account. He developed very well last season and even picked up a rare podium in Baku. The team also lost a veteran wizard with Felipe Massa’s departure. It remains to be seen as to who will fill this void, although the return of Robert Kubica would cast the greatest magnitude of magic that Hufflepuff Williams has seen for a long time.

Hufflepuff Williams signature spell: Alohamassa – Was used a lot last season to try and unlock a positive R&D path for the FW40 using the vast feedback of veteran Felipe Massa. It is unclear what spell the team will be using in 2018.

That concludes our blending of the F1 and Harry Potter universes. Check out Daniel Crossman’s Behance page for more incredible concept liveries and art. 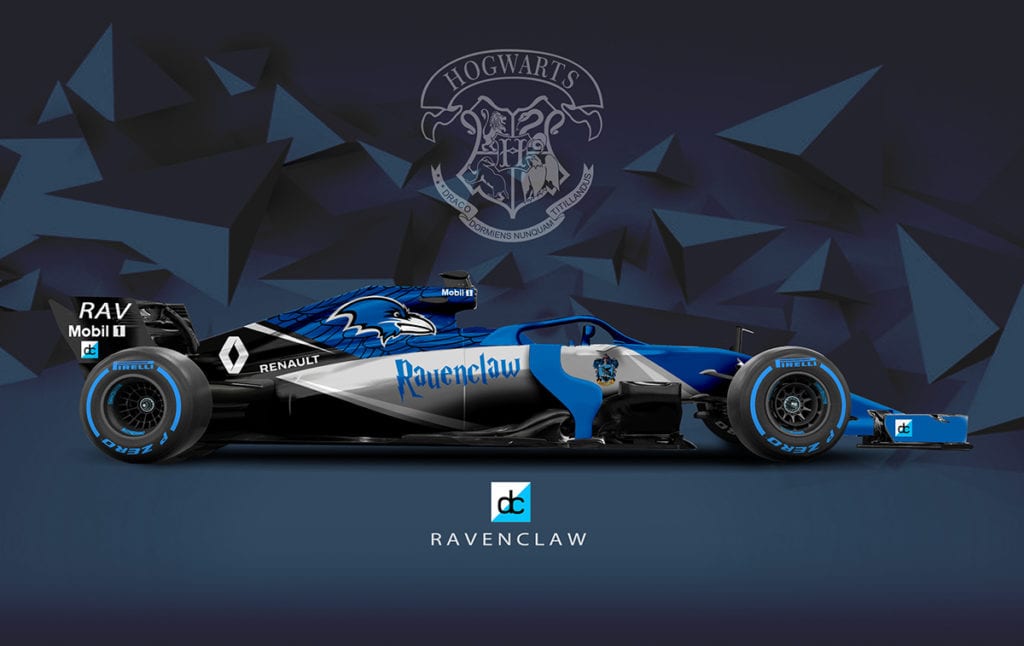