IndyCar’s First Windscreen Test Seems To Have Gone Rather Well

Last year F1 announced it was ditching the Halo in favour of the ‘Shield’ windscreen concept. Sebastian Vettel tested it at Silverstone and after a single lap came in and complained that it made him feel dizzy. Shortly afterwards, the FIA changed its mind, dropped the Shield, and announced the Halo would be mandatory from 2018.

IndyCar doesn’t want to use the Halo, however, and has persisted with the development of a windscreen concept. It was fitted to a car for the first time recently, with four-time champion Scott Dixon trying out the system at the Phoenix oval. His first impressions? Well, they’re actually pretty good.

Dixon ran the device at varying times and said that none of the issues he expected – such as distortion – really materialised.

“There’s no game-stoppers. It’s a little bit different looking through something that’s so thick, but I thought it would be worse with distortion but there was nothing like that.

“What everyone was worried about is if we drive out and can’t see properly, glare was going to be an issue. We ran it at probably one of the worst times in Phoenix, too. Going into turn one it was complete sun and then going into the darkness.”

“But I think to start it’s pretty good. It is a little different to look through, you’ve got to imagine it’s quite a thick piece of material you’re transitioning and looking through. It’s more the sensation of having to get used to it, it’s like when you have a new pair of glasses or contacts or something like that, it visually takes you a little bit to get used to.”

Having the driver’s head shielded from the airflow also provided Dixon with a couple of unusual and unexpected side-effects.

“The weirdest thing is how quiet it is. You have no buffeting, the car feels very smooth, it feels like you’re in a luxury well-damped car. But cooling! We need some cooling, just because you get no airflow through the car. Kudos to [the series], but there’s definitely things that we can improve on and make better.”

Dixon did admit that he has some concerns over whether or not it’ll work on a street course (of which there are many in IndyCar) as there have been some problems in the simulator. He also said that it’s something everyone would need to try as it could affect different drivers in different ways.

It all sounds pretty positive though. It certainly looks a lot less intrusive than the Halo too – in fact, from the front-on view, it’s almost invisible!

IndyCar is hoping that if all tests go well the windscreen (or ‘deflector’ as it’s becoming known) could be introduced as early as the end of this year. If that does happen it’ll be interesting to see how F1 and the FIA react to it. Will they push on with the Halo or look to make a switch? 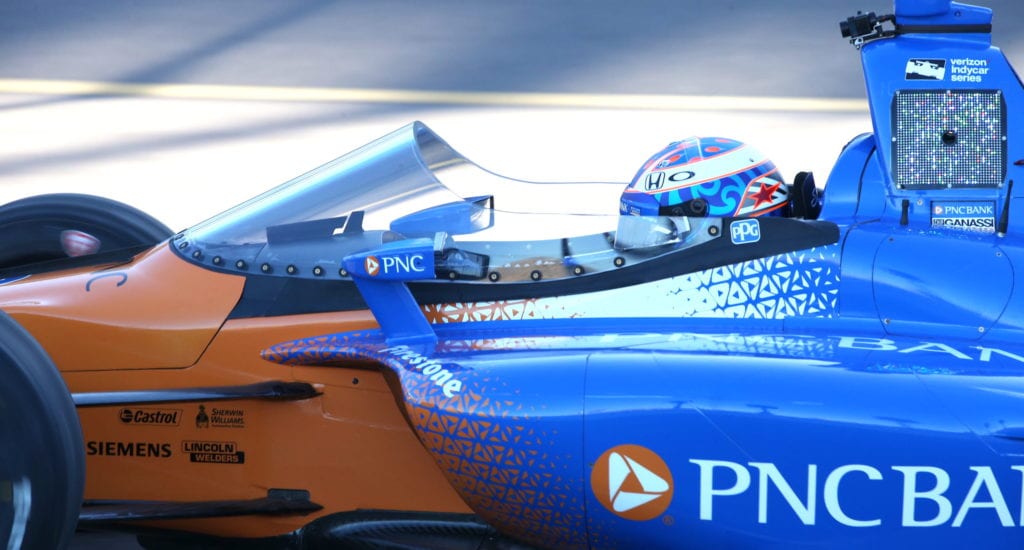