IndyCar returned to the Gateway track for round 15 and this year’s field certainly put on a show for the huge volume of fans who packed the grandstands.

There were fails, big crashes, wheel-banging overtakes and much more to keep the fans entertained, with Josef Newgarden emerging from it all to claim his fourth win of the season.

It all began in rather unusual circumstances, with Ganassi’s Tony Kanaan spinning into the wall at Turn 2 on the final formation lap. Yep, the race hadn’t even started…

Following Kanaan’s awkward spin, the race did kick off under the safety car. Kanaan continued several laps down but he later retired with mechanical gremlins.

The restart sparked an absolutely massive accident between Will Power, Ed Carpenter and Takuma Sato – a terrifying crash sparked when Power lost the rear end.

He’d just lost the lead and flew up the track and into the barrier, with Carpenter barrelling into his car and launching over the Penske, getting some considerable air in the process.

Sato also spun off in the chaos and hit the barrier. Thankfully all three drivers were OK after the accident – it was definitely a scary one!

There was also a big hit for JR Hildebrand just after the 100-lap mark, with his ECR machine going straight on and into the wall, indicating a possible issue.

A little way into the second half of the race, ex-F1 star Max Chilton smashed into the barrier and brought out a caution, after losing the rear at high speed and sliding into the wall.

With 32 laps remaining, the lead fight heated up between team-mates Newgarden and Simon Pagenaud and it all ended with this wheel-banging move for P1.

Newgarden muscled his way through to snatch the lead from Pagenaud and edge clear, a decisive, race-winning move from the American racer.

It’s also worth noting Sebastien Bourdais did a great job on his return to IndyCar for the first time since the Indianapolis 500 qualifying crash that ruled him out for several months, he was P10. 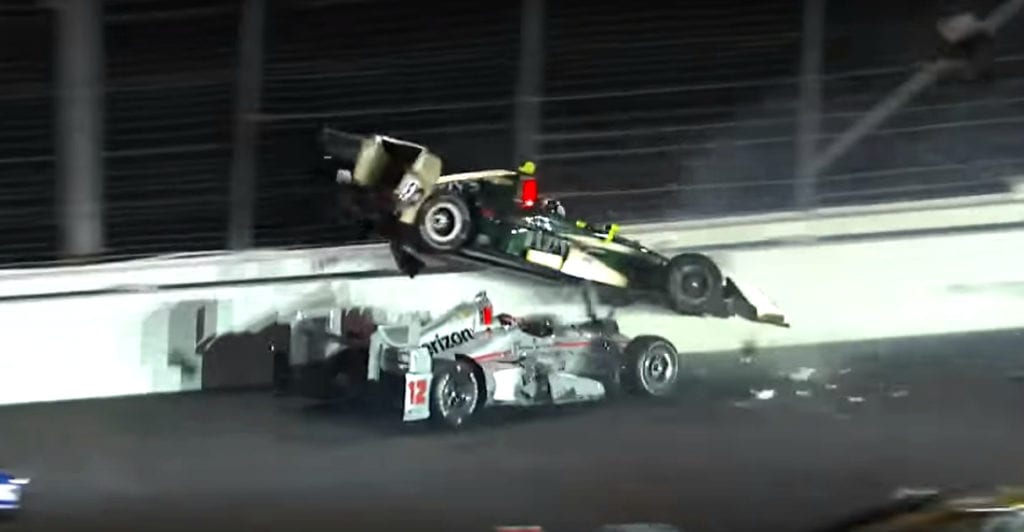