Infiniti Explains The Impact That The 2021 Power Unit Regulations Could Have On F1 – WTF1
Skip to content
×
Formula 1 , News

When the initial 2021 regulations were tabled, there was some concern regarding another costly regulatory reset on the power unit. Whilst the hybrid 1.6-litre power unit would remain, the MGU-H (which recovers heat energy from hot exhaust gases and recycles this into electric power) was going to be dropped. Instead, greater emphasis was going to made on much more effective MGU-K – the aspect that recovers kinetic energy under braking that then delivers extra torque upon acceleration.

Given the costs and effort involved for manufacturers in developing both of these systems in recent years, simplifying the system has been a bone of contention. We spoke to Tommaso Volpe, the Director of Motorsport and Performance Projects at Infiniti (a technical partner of the Renault team) about this potential change. Volpe told WTF1:

“The MGU-K is definitely the key component of the hybrid technology. It adds electric torque to the acceleration, so it is the moment the PU becomes electrified. The MGU-H, on the other hand, is the revolutionary part that is usually missing in any traditional hybrid. Its development and inception required a lot of innovation in Power Unit R&D, but it came with a price in terms of complexity and costs.

‘It is however potentially useful for the automotive industry – for example Renault Sport Racing and Inifniti are replicating the same system in the Infiniti Black S. Retaining this element is the principal point of discussion between F1 and the teams.”

If F1 was to go forward with a greater emphasis on a stronger MGU-K, then we might start to see drivers strategically deploying bursts of power over a lap, or even saving energy over several laps for a significant boost at a later stage. Having one kinetic energy recovery system is reminiscent of the KERS system F1 introduced in 2009. But there are key differences too, as Volpe explains:

“The way they work is very similar as the kinetic energy is recovered under braking to give extra torque delivery during acceleration. KERS was however designed to be a potential add-on to the ICE [internal combustion engine], while the MGU-K is an indispensable part of the whole PU in modern F1 cars. The energy recovery and the torque delivered by the MGU-K is much more compared to the KERS, and running without it means a huge performance drop-off.

“From an automotive perspective the R&D generated by the KERS was not much more relevant than the traditional hybrid already in existence in the industry at that time, while the whole dual hybrid system in current F1 PU is a huge source of knowledge and potential application to future products.”

Some teams don’t like the idea of introducing new PU regulations for 2021 and there is a growing likelihood that this will be postponed until 2023. At a time in which the difference between the four power unit manufacturers is decreasing and efforts are being made to reduce the overall cost of participating, staggering the upcoming regulatory shift rather than delivering it in one block seems more palatable. Volpe is in agreement with this, saying:

“Stability is always a good thing, for engine manufacturers but also for the teams and the show because it is the best way to reduce the gap between the different engines. As an Infiniti executive, I cannot explain better the official position of Renault Sport Formula 1 Team if not quoting Cyril Abiteboul: ‘There is no need to change the architecture of the PU to reach the objectives fixed by Formula 1 of more power, more noise and so on: we can improve the current engine by increasing the fuel flow and revs, for example.’”

Another floating idea is to increase the rev limit by 3000rpm, which would potentially go some way to absolving the current ‘lack’ of noise. In the current hybrid era, this is the final bastion of concern given that attaining ultimate speed can no longer be regarded an issue – after all, Kimi Raikkonen’s pole lap at Monza was the fastest in F1 history…

The official outcome of the upcoming PU regulations determines the horizon that all teams must eventually meet, but the longer that the current format can be sustained, the smaller the gaps between these manufacturers will be. 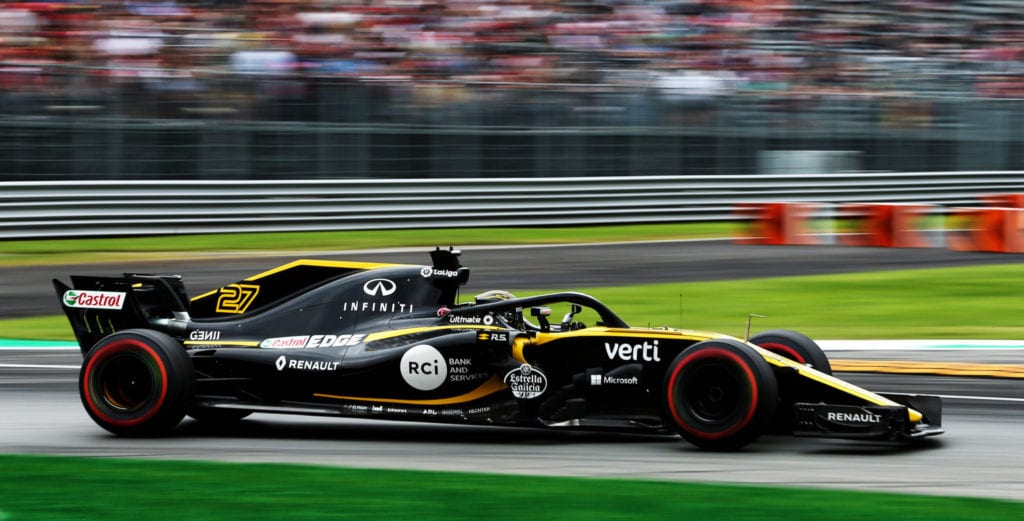