Is Fernando Alonso About To Announce He’s Ditching F1 For IndyCar?

What is Fernando Alonso going to do next year? It’s the question on the lips of not just F1 fans, but also motorsport fans. It’s hard to imagine him committing to another year of F1 given that McLaren doesn’t look like being a championship contender any time soon, and he himself shot down the already ridiculous rumours that he might go to Red Bull.

Will he stay in F1? Will he go and do IndyCar? Or will he something else entirely? It seems we might not have to wait too much longer to find out – if this tweet and accompanying countdown gif is anything to go by.

It seems like something is happening and the mere anticipation sent fans into a frenzy.

The #FernandoWATCH level has just been upgraded to HIGH until more information is available about what 💥14-08💥 means. #INDYCAR

As always, please retweet to ensure your friends are aware and take necessary precautions. pic.twitter.com/oulngYebmk

IndyCar then stoked the fire by putting out this highly-suggestive tweet:

Of course, that’s only upped the hype levels even more:

@IndyCar knows something we’ve being hoping for, don’t you?

Alonso to IndyCar hype level: I have now turned on tweet notifications for Fernando's account in anticipation for tomorrow's announcement

Is Fernando about to announce that he’s leaving F1 to do a full IndyCar season in 2019? It would make sense. He’s already won two legs of the triple crown, which surely makes having a full assault on IndyCar and the Indy 500 even more appealing.

On top of that, IndyCar team boss Michael Andretti recently said that although he’d love to have Alonso drive for him, the decision had to be made by 19 August. Whatever this announcement is, it certainly fits within that timescale.

However, IndyCar could just be having a laugh and the announcement could be about nothing. These two tweets probably take a more realistic view of what it could be about…

Kimoa have got a sale on haven't they? 😂

Yeah, it’ll probably be about Kimoa. That or his karting school.

Either way, we haven’t got to wait long to find out. 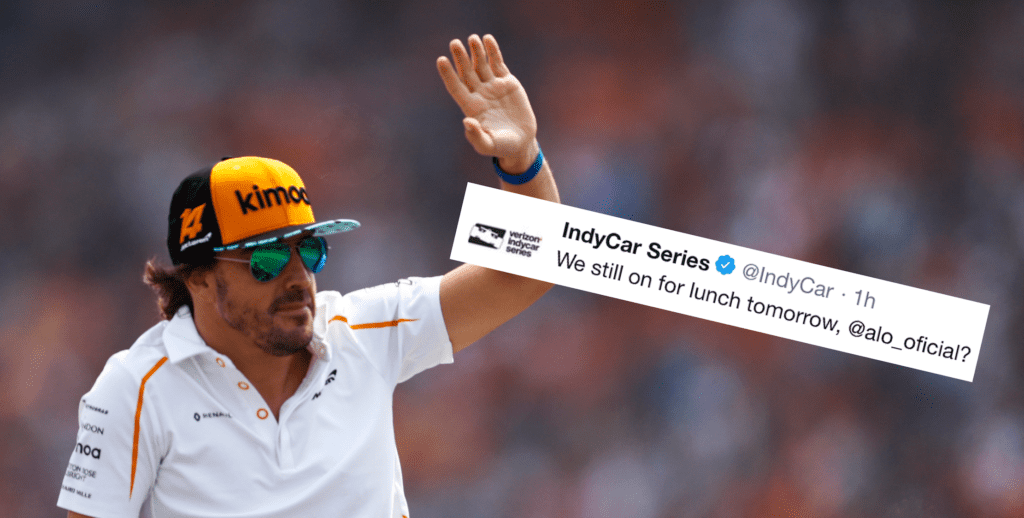