It Looks Like The ‘F1 Team To FIA’ Radio Message Broadcasts Are Here To Stay – WTF1
Skip to content
×
Formula 1 , News
3 comments

It was a very welcomed addition to the television broadcast for the Spanish Grand Prix: Toto Wolff sending a direct message to FIA race director Michael Masi. Although these kinds of conversations are rare, we were obsessed with the new graphic.

As F1 fans, we’ve been victim to various weird additions to the television broadcast over the years. There has been a fair share from the tyre performance tool to the estimation of how many laps it will take to overtake the car in front.

However, we all sat up and paid attention when we heard Mercedes boss Toto Wolff radio to the FIA “Michael, blue flags. Michael, this guy makes us lose the position.”

The radio call was concerning Nikita Mazepin of Haas, who was in front of Lewis Hamilton. Race leader Max Verstappen had just pitted, and Hamilton had already spoken to his team about “blue flags” to get Mazepin out of the way.

There is a process in place by F1 that triggers an automatic marshalling system when it comes to blue flags. This system gives a pre-warning when the faster car is within three seconds of the driver who is about to be lapped, essentially telling the respective teams to get their driver out the way.

Then, when a driver is in a 1.2 second gap, the blue flag symbol that we all know is displayed. This includes a blue light in the driver’s cockpit, blue flags and blue trackside panels—the whole works.

Speaking about the new tv graphic, Masi said the FIA and F1 worked on the idea for a while.

“It actually came about through a discussion at an F1 Commission meeting last year, so the [tv viewers] could hear as part of the broadcast the communications between the pitwall and the teams, which is a regular part of what we do operationally.

“Yesterday was the first time that it started [being available to broadcast live].

“So the F1 Group, through their broadcasts, has been doing some trials in the background, have seen what that looks like.

“All the teams were advised, and this weekend’s the first time it’s gone live to air.”

It sounds like it’s going to be a regular occurrence, and we can’t wait to see what other behind-the-scenes calls are made. We usually only hear from drivers to their teams, so this new feature will add an extra layer of intel to worldwide tv audiences.

Do you like the new feature? Let us know in the comments below. 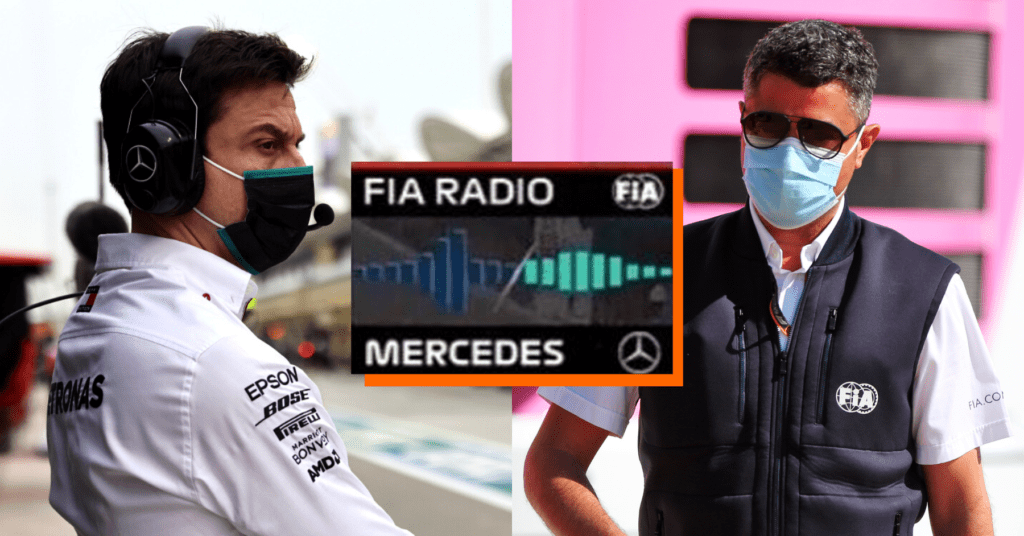