It Was A Bad Day To Be A Tyre Barrier During The Mosport Round Of The WSCC – WTF1
Skip to content
×
Crash , GT

One of the coolest things about the WeatherTech Sports Car Championship it that it allows us to see top-level prototypes and GT cars racing around some of the awesome old-school tracks of North America. It’s a stark contrast to WEC venues like Shanghai and Bahrain, and when drivers get it wrong it tends to happen in a big way.

The epic Mosport circuit in Canada is typical of the type of track the series visits. It’s narrow, it’s bumpy, it’s undulating and there are no massive tarmac run-offs – just a bit of armco with some tyre stacks in front of them.

They work though and that’s a good thing, because during this weekend’s race there a couple of sizeable accidents late in the race really put them to the test.

The championship-leading No.10 Cadillac had made its way up to the lead following a rain shower, but whilst navigating traffic it all went wrong.

Jordan Taylor made it three-wide as he put a lap on a couple of GTLM cars, but misjudged it by the tinest of amounts and just clipped the No.4 Corvette of Tommy Milner, sending the pair of them into the tyres on the outside of turn four.

Milner was ok but the Corvette was out on the spot, and although Taylor got the No.10 Cadillac going again without losing the lead, he had to pit to repair damage and ended up finishing down in seventh, two laps down.

The safety car was put out to clear the damage and repair the barriers, and with a few minutes to go the race went back to green. The tyre barriers couldn’t rest easy yet though – rain started to fall again and made conditions immensely difficult.With little more than a minute to go another prototype driver dropped it – not that you could see them from the initial shot, though!

David Ostella in the No.52 Ligier slid wide in the damp conditions and scattered more tyres everywhere as his car dramatically flipped over. Ostella was ok but his accident meant the race finished under yellows.

Tyre barriers. They look crude and make an awful mess, but they work! 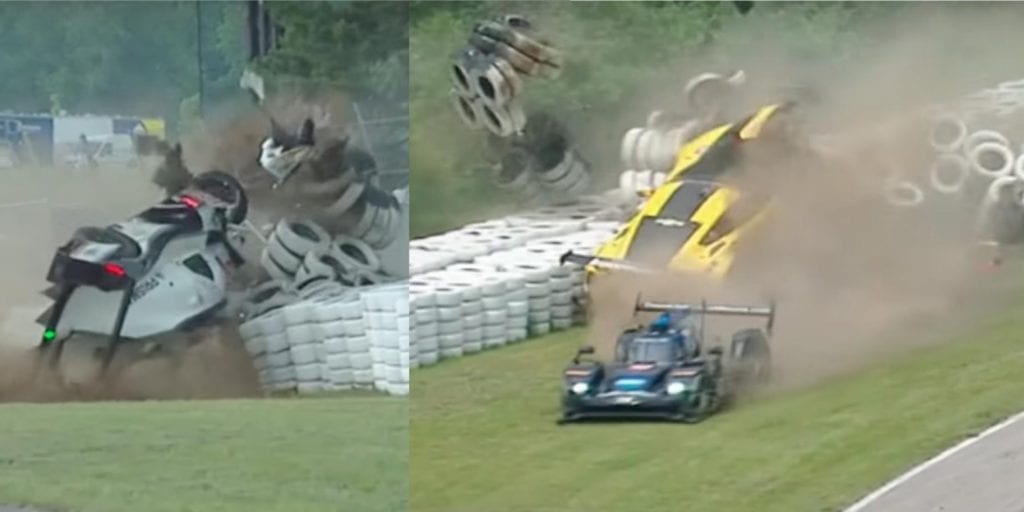