McLaren’s policy of giving its drivers equal treatment is admirable, but in 2007 that approach led to a massive breakdown in the relationship between double world champion Fernando Alonso and his rookie teammate Lewis Hamilton.

There had already been signs of discontent a few races into the season. In Monaco Hamilton was unhappy at being told to hold station behind his teammate to ensure a 1-2, and in Indianapolis Alonso was furious at being bottled up behind Hamilton despite feeling he was faster. But what happened in Hungary made those look like complete non-events.

2007 was one of the years of the ‘fuel burn’ phase at the start of Q3. Drivers had to start Q3 with the amount of fuel they were going to start the race with, which meant that much of the session was spent watching cars driving around trying to use as much fuel as possible in order to make their car as light as possible for their flying laps.

The nature of this meant that for a team with two cars in Q3, one of the cars would usually end up getting to do an extra lap, thus getting to burn more fuel and giving them a slight advantage over their teammate. McLaren got around this by alternating who got to do the extra lap – Alonso would get it for one race, Hamilton the next.

At the Hungaroring it was Alonso’s turn. But Hamilton was out on the track ahead of him and when the team asked him to allow Alonso past, he refused. His gamesmanship would surely have had ramifications for him within the team, but Fernando took matters into his own hands.

As the two drivers pitted for new tyres for their final runs, Alonso was held for a while in order to get some clear track, with Hamilton stacked up behind him. But after the team released Alonso, he sat there for an extra ten seconds! Eventually he set off, but the extra delay meant that Lewis didn’t have enough time to put in another lap.

It was fairly impressive stuff from Alonso – not only to correctly judge the amount of time he had to wait to prevent his teammate from putting in another lap, but also to put it out of his mind straight away and go out and take pole position.

Ron Dennis wasn’t happy. He was furious that Hamilton had ignored a team order, and he was furious that Alonso had dealt out his own form of justice rather then letting the team handle it. He tried to convince the stewards that the team had purposefully held Fernando in the pits but nobody bought it. He’d obviously impeded Hamilton and was given a five-place grid penalty, whilst McLaren was bizarrely told they wouldn’t be able to score constructors points in the race.

Following the drama a shouting match between Dennis and Hamilton was overheard in the paddock, but the big moment happened on Sunday morning before the race.

The spygate saga had been rumbling on all summer over allegations that McLaren were using Ferrari’s intellectual property. The week before the Hungarian Grand Prix McLaren had been found guilty of possessing confidential information, but with no evidence to suggest it had been used the team escaped any penalties.

Alonso changed all that on the morning before the race in Hungary. He went to Dennis and claimed that he had emails that would incriminate the team, and that he’d send them to the FIA if he didn’t deal with Hamilton. Ron didn’t believe him and immediately told FIA president Max Mosley that Alonso was attempting to blackmail him.

Although Fernando later retracted his threat the FIA reopened the case in light of the evidence and it led the to the team being fined a whopping $100 million and stripped of all its constructors’ points for the season. Ron had basically dropped his own team in it just after they’d all but got away with it. 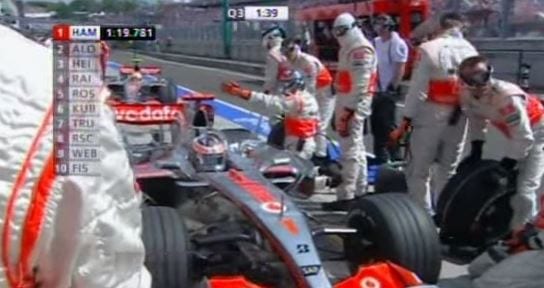