When it comes to IndyCar (or CART, or Champ Car, or IRL depending on what year and what series you’re watching) close finishes aren’t uncommon. Usually they tend to happen on ovals, but during the 1997 CART season fans were treated to something of an oval-style finish at the awesome Portland International Raceway – a road circuit.

It had been a largely wet race, but with around a dozen laps to go the track was getting to the stage where slick tyres were the quicker option. Blundell pitted from the lead to put slicks on and dropped down to sixth place, more than half a minute behind leader de Ferran, who had elected to stay out on wets.

The cars on slicks were several seconds a lap quicker however, and by the last lap Blundell was right on the tail of the leader. He tried everything but couldn’t find a way ahead as de Ferran defended his position. Coming out of the final corner it was Blundell that had the traction.

He just managed to edge ahead of de Ferran by the finish line to win his (and the PacWest teams) first race by just 0.027 seconds. And while all eyes were on the battle for the lead it had been easy to overlook Raul Boesel, who’d taken chunks of time out of the leaders and almost got ahead of the pair of them!

In the end the gap from first to third was just 0.055 seconds, making it the closest 1-2 and 1-2-3 finish in the history of IndyCar. And because IndyCar is awesome, the entire race is on its YouTube channel!

It’s well worth a watch, because this was a time when CART was a genuine rival to Formula 1. 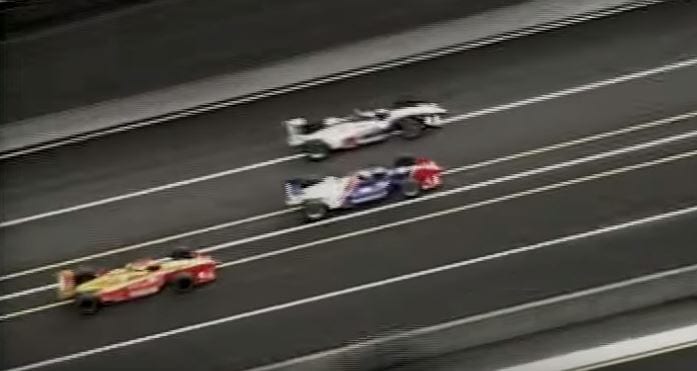