What a great weekend!

I’ve scored my first win in Formula 2 this weekend at Barcelona, and I’m having my first test in a current Formula 1 car at the same track this coming Wednesday. It’s fair to say that life is pretty good at the moment!

We’d been building up to having very good pace at ART GP over the first two rounds of the F2 season, but we’d suffered particularly badly with the clutch problems on the new car. We had been confident of our performance heading to Barcelona, but when we went out in free practice, from the first laps we had really big problems with the stability of the car. But that was reported from all teams and drivers – even the Formula 1 teams – and it seems to be something that’s evolved from the new tarmac since it was resurfaced this year.

Everyone struggled a bit, but we learned a fair amount, and in qualifying we stepped forward to the extent that I could have had a front row start. The DAMS cars did seem to have an edge over us, being able to do just one lap at the end, but if I hadn’t made a mistake at the chicane on my last lap it could have been P2 for us. As it was I was fifth, so not a bad result, just slightly frustrating when we knew it would be tough to overtake.

Going to the grid there were spots of rain, and it was really difficult to warm up the tyres. Because of the threat of rain, a lot of people opted to start on the prime tyres so they could get more laps in if the rain came later in the race, and wouldn’t have to make a second stop for wet-weather tyres. But I thought it was quite clear that the rain would pass over, so I started with the softer option tyres, which would be easier to get working. As it turned out, it was very even across the two compounds, so it was a lot of fuss about nothing!

Because of our start problems this year, I went for a conservative start, got a fair bit of clutchspin and lost a place, so I was now sixth. As expected it was really difficult to pass, even with what seemed like good pace for us, so we went for the undercut when I pitted for prime tyres – I had the quickest out-lap and I undercut Lando really significantly for P5.

Unfortunately the balance wasn’t perfect and I’d pushed the tyres hard, so I dropped back, but was hoping those who pitted for option tyres would start to struggle. But the virtual safety car put paid to that – it was a bit frustrating and I finished sixth, but it could have been a lot worse.

That put me third on the reversed grid for Sunday’s race, and we almost had a similar situation to Saturday, with a wet track on the grid, but everyone started on slicks. We worked really hard on the starts overnight, and amazingly this time I managed to get a good one! I got up to second straight away, I got a tow on Markelov into Turn 1 and I moved into the lead. I immediately thought I should push hard to get a gap to take advantage in these tricky conditions, with some corners still wet and others dry. When I looked back after sector two I could hardly see Markelov behind me, so I was pretty pleased at that point!

I really put the hammer down for the next few laps, and it was OK to do that in those conditions, which were cool and therefore easier on the tyres. I had the gap up to 12 seconds and then there came a safety car – which was a shame obviously! I got a good restart, and then I had some tyre degradation later in the race so I concentrated on managing the gap and keeping it constant. I tried to go for fastest lap on the last lap, but the tyres weren’t quite up to it after so many restarts. Still, I’m really happy to get my first win – ART did a lot of work overnight and our pace was really good.

Then comes Wednesday, with my first test in the current Renault F1 car. I drove the 2012 show car on a private day at Jerez last year, but this is my first run at a pukka F1 test. It’s going to be a lot of fun. There’s no need to go in with all guns blazing, as the team have important work to be done. The most important thing is to get through the programme as well as possible. And then hopefully I’ll be asked back! 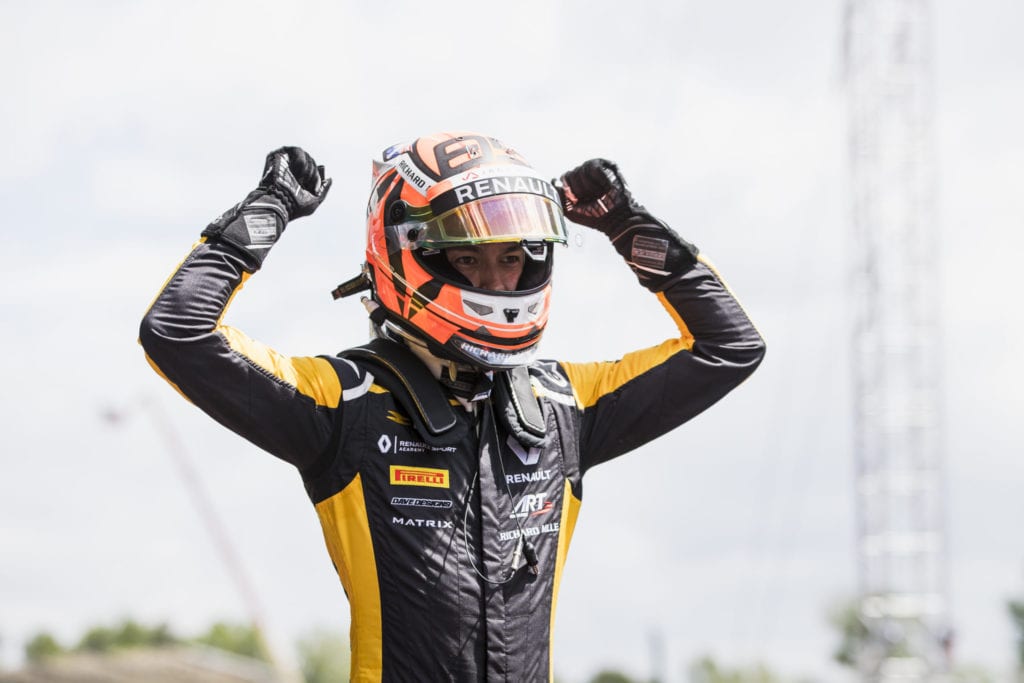